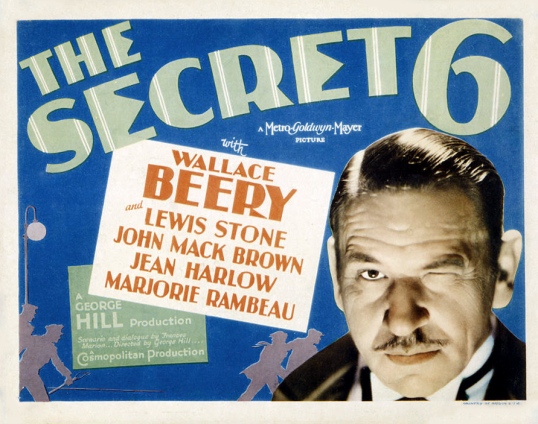 (Once again, your Cracked Rear Viewer is taking part in the TCM Summer Under The Stars Blogathon, hosted by Kristen at Journeys in Classic Film. Just like last year, I’ll be posting on two stars of Hollywood’s Golden Age: Jean Harlow (8/7) and Boris Karloff (8/26).) 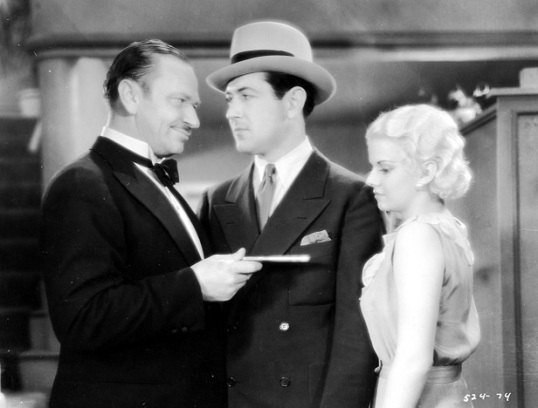 Wallace Beery plays Slaughterhouse Scorpio, who rises from the stockyards to the top of the gangster heap. He accomplishes this by brute force, bribery, and rubbing out his… 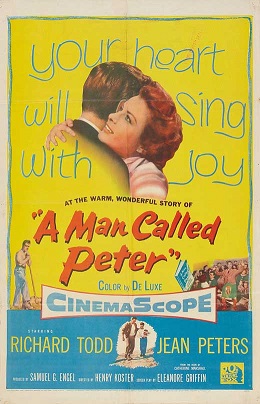 Occasionally, I’ll see a film like Crime of Passion or Bigger Than Life and I’ll say, “Wow, that’s really subversive for a movie that came out in the 1950s!”

And it’s true.  We tend to think of the 1950s as being a time when conformity ruled all.  It was a time of innocence and chastity, when cinema heroes all wanted to have a house in the suburbs and loving couples slept in separate beds and nobody ever questioned anything.  Of course, the truth of the matter is that there were a lot of films released in the 50s that challenge that perception.

And then again, there were also films like 1955’s A Man Called Peter.

A Man Called Peter is a biopic about Peter Marshall (played by Richard Todd), a Scottish immigrant who came to the United States, became a Presbyterian minister, and then eventually became the Chaplain of the United States Senate.  (That means that he would open each session of the Senate with a prayer and occasionally provide spiritual counsel to the senators.)  I recently watched it on Netflix, specifically because I thought it might be appropriate for this series of political reviews.

And it is, but just barely.

It actually takes the film a while to get to the part where Peter Marshall becomes the Senate Chaplain.  First, we watch him as a boy in Scotland, trying to stow away on a boat heading for America.  Then, several years later, he’s out walking on a foggy night.  He trips over a tree root and, as he lies on the ground, he announces that God has told him to 1) pursue a career as a minister and 2) to do so in America.  (I have to admit that I was raised Catholic so I have no idea whether he was having a typical Presbyterian spiritual experience or not.  But the film certainly takes it seriously.)

Peter ends up in America where he ministers to a church in Atlanta, marries Catherine (Jean Peters), and then eventually ends up at a church in Washington, D.C.  When he eventually is asked to serve as Chaplain of the Senate, both he and the film go out of their way to avoid taking any definite position on any issue.  Instead, Peter gives prayers that encourage the senators to put partisan bickering aside and work together to make the United States the best country in the world.

Having now watched all 120 minutes of A Man Called Peter, I can safely that this is a film that epitomizes everything that we always assume to be true about the 1950s.  From the film’s view of marriage to religion to politics, A Man Called Peter is perhaps one of the most stereotypically 1950s  movies ever made.  This is such a 1950s movie that it’s even filmed in CinemaScope!

(And speaking of CinemaScope, A Man Called Peter looks great but it’s perhaps one of the least intimate biopics that I’ve ever seen.  You can see every inch of the surrounding landscape but the human beings get lost.)

For me, the film’s most 1955 moment comes when Catherine first discovers that her husband has been reassigned to Washington, D.C.  She and Peter are on their honeymoon when they get a telegram telling them that their new home in Washington is ready.  Catherine is shocked.  Peter says that he didn’t want to interrupt their honeymoon by telling her that they’re not going home to Atlanta.  Instead, they’re going to an entirely new city and an entirely new life.  (In other words, Peter has decided to say goodbye to Catherine’s family and friends.)

“Aren’t you pleased?” Peter asks her. 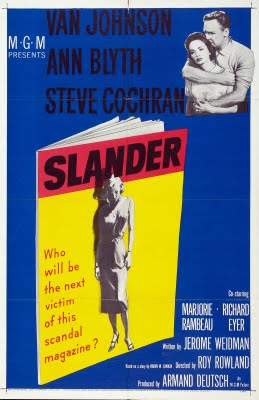 Slander, much like A Cry In The Night, is a B-movie from the 1950s that I recently discovered via Turner Classic Movies.  It’s appropriate that both of these relatively obscure films recently aired on TCM because both Slander and A Cry In The Night serve as interesting time capsules of the decade in which they were made.

To truly appreciate Slander, you have to know that, during the 1950s, Hollywood was terrified of magazines with names like Confidential, Exposed, and Private Affairs.  These were the magazines that claimed to tell the “sordid” truth about Hollywood.  In the 1950s, image was everything and one well-placed story that suggested that an actor or actress was a drug user, a former criminal, a communist, or — gasp! — gay, could end a career.  In the 50s, Hollywood filmmakers viewed the tabloids with the same loathing that they currently feel towards the paparazzi.  Slander was Hollywood’s attempt to expose the tabloids.  Perhaps that’s why it’s appropriate that Slander, in many ways, feels like a 50s version of Paparazzi.

Slander opens with tabloid magazine editor H.R. Manley (Steve Cochran) looking over him empire of scandal and searching for someone to destroy.  From the minute that we see Steve Cochran with his slicked back hair and hear him delivering his lines through permanently clenched teeth, we know that H.R. Manley is a bad guy.  Indeed, Cochran was best known for playing gangsters and that’s how he plays H.R. Manley.  It’s not subtle but it’s definitely entertaining.

Manley wants to destroy Mary Sawyer, an actress who is never seen but who we are assured is America’s sweetheart (or, as Manley puts it, “Everyone thinks she’s practically a nun, right?”) .  Manley becomes convinced that children’s entertainer Scott Martin (Van Johnson) has some damaging information on Mary.  When Scott refuses to betray his friend, Manley sets out to destroy Scott by revealing that, before he become America’s most beloved puppeteer, Scott served time in prison on an armed robbery conviction.

(To understand just how ludicrous this revelation is, you have to understand that Scott is played by Van Johnson who was pretty much the epitome of the fresh-faced, likeable, All-American optimist in the 50s.)

Despite the pleas of his wife (played by Ann Blyth), Scott refuses to give into blackmail.  Soon, Scott Martin is on the cover of the Manley’s magazine.  In the great tradition of the 50s social problem film, this leads to the most melodramatic conclusion possible.

Watch, in amazement, as Scott’s son reacts to the scandal of his father being a former criminal by running out in the middle of the street and getting hit by a car.

Try to look away as Manley’s drunken mother (played by Marjorie Rambeau) considers killing her own son in order to end the evil of the tabloid press.

Listen, in shock and regret, as Scott goes on television and gives an overwrought speech in which he tells us that if we’ve ever read a tabloid magazine then we are responsible for his son’s death.

Or, as one extra says when he spots Scott and his wife walking down the street, “Maybe people will stop reading those tabloids…”

It’s a bit too overwrought for its own good but I have to say, as someone who looks forward to going to the doctor specifically so she can read the copies of US Weekly that he keeps in the waiting room, I enjoyed Slander.  The film is melodramatic and totally over-the-top and, as a result, it’s also a lot of fun.  If for no other reason, the film is worth watching just for the chance to enjoy Steve Cochran’s incredibly sleazy portrayal of the apparently soulless tabloid editor.

Slander shows up on TCM occasionally but it’s also available for viewing on YouTube.  Or, if you’ve got 81 minutes to kill, you can watch it below.