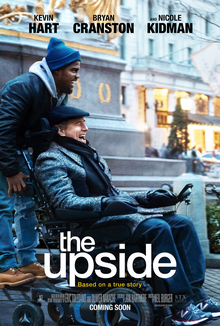 There’s a lot of opera in The Upside.

That, in itself, is not a surprise.  The Upside is about a wealthy, emotionally repressed white man and, if there’s anything we’ve learned from the movies, it’s that wealthy, repressed white people always love opera.

Another things that we’ve learned from the movies is that wealthy, emotionally repressed white people always hire a streetwise person of color to help them learn to appreciate life.  This person  of color will inevitably not care for all of the opera and will then introduce the wealthy, emotionally repressed white person to their own type of music.  If the movie’s a comedy, that music will be rap.  If it’s a drama, that music will be jazz.  The Upside is a dramedy so the music of emotional liberation is Aretha Franklin.

There’s not a single cliche that goes unused in The Upside.  Actually, I take that back.  As opposed to so many other films of this short, Phillip (Bryan Cranston) does not start the film as a politically incorrect bigot, which means that we’re spared of any cringey scenes of Philip trying to bait Dell (Kevin Hart) by being casually racist.  Otherwise, every cliche imaginable is present in The Upside and it all gets to be a bit much after a while.  I’m sure that the film means well and there’s a part of me that felt a little bit guilty about not liking it but seriously, this is one of those movie’s that just keeps coming at you.

Phillip is a paraplegic who wants to die, though not before listening to a lot of opera.  Dell is an ex-con who needs to find a job so his parole doesn’t get revoked.  Yvonne (Nicole Kidman) is Phillip’s personal assistant.  She’s obviously in love with Phillip, though for some reason this fact is never acknowledged until the end of the film.

Together …. they solve crimes!

No, actually, they all become friends and learn the importance of celebrating life.  It’s a good lesson to learn, make no mistake.  But it’s just all so predictable that it’s hard not to resent just how thoroughly and blatantly the film insists on trying to manipulate you.  You get the feeling that the filmmakers didn’t have any faith in their audience’s capability to feel empathy.  Director Neil Burger did such a great job with Limitless but, with this film, he seems to have lost his sense of pacing.  The movie drags from one heartwarming cliche to another, without any hints of the type of quirky self-awareness that would help to make those cliches easier to digest.

Bryan Cranston’s a great actor but, perhaps realizing that he’s merely playing a more a benign version of Walter White, he seems a bit bored here while Nicole Kidman is sabotaged by a script that doesn’t allow her to do much other than reproachfully shake her head.  Kevin Hart, however, actually gives a pretty good performance, one that suggests that he actually has a lot of potential as a dramatic actor.  The character may be a stereotype but Hart at least brings a bit of energy to the film.

The Upside came out this January and it was actually a modest box office hit.  I imagine that a lot of people loved this film for the exact reason that I disliked it.  The film’s just too predictable for me to embrace The Upside.

Ridley Scott has been hit-or-miss (mostly misses) of late and response to the trailers and news about Exodus: Gods and Kings doesn’t seem to be helping.

Yet, despite all the indifference to Scott’s upcoming Biblical epic (and calls of whitewashing) I am quite intrigued about this take on the Book of Exodus. Will it have the pageantry of Demille’s The Ten Commandments (both of them)? Or will it be another CGI-overload? Or will it be a piece of entertaining pulp a la Gladiator? I guess we will find out this Holiday season.

Ridley Scott has been instrumental in bringing back the sword-and-sandal epic when he unleashed Gladiator to audiences everywhere in the summer of 2000. Since then he has made many films which range from black comedy to historical epic right up to horror and a war film.

With Exodus: God and Kings, Scott returns to the sword-and-sandal epic but now with a heavy dose of the Biblical as he adapts the Old Testament Book of Exodus. A film working on the same scope and scale as Cecil B. Demille The Ten Commandments released in 1956, this latest adaptation of Moses, Ramses and the exodus of the Israelites from Egypt looks to put the epic back in 2014.

With each passing year, more and more of Scott’s films have taken on the unavoidable sheen of the CGI as his visuals attempt to recreate time and places of Earth’s past. For some, Scott’s been more miss than hit with the last couple films yet they all remain visual feasts and Exodus: Gods and Kings looks to continue that streak. Whether the film will be good storytelling will be something that’s still to be decided.