A film about David, the young shepherd and musician who eventually became the second king of Israel?

After all, David is one of the most compelling figures in history.  Whether it’s the slaying of Goliath or his ill-fated friendship with Jonathan or his uneasy relationship with Saul, every detail about David’s youth feels perfect for cinematic drama.  And then, once David become king of Israel, the drama doesn’t end.  David finds himself dealing with both politics and temptation.  He falls in lust with Bathsheba and, in a moment of terrible weakness, he arranges for her husband to be killed in battle.  His own son, Absalom, turns against him and then, despite David’s very clear orders to the contrary, Absalom is executed while he helplessly hangs from a tree.  For every triumph in David’s life (like the time he used a slingshot to take down Goliath), there’s a tragedy.  For all of David’s attempts to be a good and wise king, he still struggles with his own weaknesses.  Every detail of David’s life seems like it belongs on the big screen.

So, now that we’ve agreed that the life of David would be perfect for a movie, consider this: A film about David, a master of both poetry and politics who was known for his deep emotions, starring Richard Gere?

There are a few good things about King David.  Edward Woodward gives a good performance as Saul, who has always been overshadowed David but who was, in his own way, almost as compelling a character.  The film does a credible-enough job recreating the ancient world and it’s entertaining to see the iconic Italian actor George Eastman show up as Goliath.  Far too often, though, King David becomes one of those films where every big action scene is shown in slow motion and there’s too many close-ups of swords being tossed into the air.

According to Wikipedia (that’s right, I did some “serious” research for this review), King David was actually made because it was felt that the film would be able to draw in the same audience that loved Star Wars.  That turned out to not be true as the film was a huge flop and apparently damaged a lot of careers.  But, flop or not, it was still on TV last night, which just proves that movies are forever.

Oh my God, this is an exhausting movie.

Directed by and starring Kenneth Branagh, the 1994 film Mary Shelley’s Frankenstein sticks pretty closely to the plot (if not the tone) of Mary Shelley’s original novel.  What that means is that this movie includes a lot of the good stuff that often seems to get left out of other Frankenstein adaptations.  For instance, we learn more about the life of Victor Frankenstein (Kenneth Branagh) before he created his monster.  We find out about his family and his troubled romance with Elizabeth (Helena Bonham-Carter).  Victor’s good friend Henry Clerval (Tom Hulce) is included and so is Professor Waldman (John Cleese) and Captain Robert Walton (Aidan Quinn).

It also means that we get to watch as the Monster (Robert De Niro) flees into the wilderness and later befriends a kindly blind man (Richard Briers).  The Monster, as always, is happy until mankind interferes and treats him unfairly.  The Monster learns to speak and, after it learns to read, it discovers who created it and it sets out for revenge.  We watch as everyone that Victor Frankenstein cares about dies, all as a result of his desire to play God.

And yet, while you have to respect the fact that Branagh tried to stay (more or less) true to the plot of the original novel, Mary Shelley’s Frankenstein is a bit of a chore to sit through.  A huge part of the problem is that Kenneth Branagh cast himself to play Victor Frankenstein.  In the book, Victor is a rather sickly character and his desire to create life is probably as much inspired by his own poor health and the death of the people close to him.  In the film, Branagh plays Victor as being almost a Byronic figure, with the camera emphasizing his flowing hair and his muscular physique.  Even when Victor does push himself to the point of death in his research, you never really believe it because Branagh the director isn’t willing to let Branagh the actor look weak or malnourished.  However, turning Victor into an alpha male also turns him into a jerk.  Unlike say Colin Clive or Peter Cushing in The Curse of Dracula, you never find yourself sympathizing with Kenneth Branagh’s Victor.

And then you have Robert De Niro as the Monster.  Now, really, I imagine that — in 1994 — the idea of De Niro playing the Monster seemed like an obvious one.  I mean, the Monster is a great role and De Niro’s one of the greatest actors who ever lived so if anyone could find a new and interesting way to play Frankenstein’s Creation, it would have to be De Niro, right?

But no.  First off, De Niro may be a great actor but it’s hard to accept the idea that a monster created in Germany would speak with a New York accent.  Even under tons of makeup, De Niro does an okay job of projecting the Monster’s rage but, unlike Karloff or Christopher Lee, De Niro never seems to really connect with the character.  You never forget that you’re watching a heavily made-up Robert De Niro.  De Niro often seems to be rather detached from what’s happening on screen.

Branagh’s directs in a manner that can only be called operatic, which turns out to be a mistake.  The story is already dramatic enough without Branagh spinning the camera around every few moments.  There’s not a subtle moment to be found in the film but unfortunately, Frankenstein is a story that needs just a little bit of subtlety.  It all gets to be a bit overwhelming and, by the time the Monster is literally ripping a heart out of a body, you’re just like, “Enough already!” 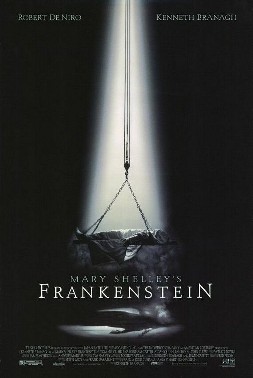 (With this year’s Cannes Film Festival coming to a close, I figured that I would start of today by looking at some previous winners of the Palme d’Or.  We start things off with 1986’s The Mission.)

The Mission opens with a man stoically plunging over a waterfall.  That man is a priest who, in the 1740s, has been sent to convert the natives of the Paraguayan jungle to Christianity.  The natives’ reaction to the priest’s arrival was to tie him to a wooden cross and send him over the falls.  It’s an opening that perfectly captures one of the main themes of The Mission: the contrast between the beauty of nature and the savagery of man.

The majority of the film deals with two men.  Father Gabriel (Jeremy Irons) is the Spanish Jesuit who replaces the martyred priest.  Father Gabriel is a pacifist who manages to win the trust of the natives through a shared love of music.  Gabriel plays the oboe and, when it is snatched away from him, reacts not with anger but with acceptance.  With the help of Father John Fielding (Liam Neeson), Father Gabriel builds a mission and works to educate the natives.  This brings him into conflict with the local plantation owners, the majority of whom just see the natives as being potential slaves.

That’s where Mendoza (Robert De Niro) comes in.  A brutish and violent man, Mendoza makes his living kidnapping natives and selling them into slavery.  When Mendoza discovers that his fiancée, Carlotta (Cherie Lunghi), has fallen in love with his younger brother, Felipe (Aidan Quinn), Mendoza snaps and, in a moment of anger, kills his brother.  Seeking forgiveness for his violent past, Mendoza travels to Father Gabriel’s mission, dragging all of his armor and weaponry in a bundle behind him.  When Mendoza finally reaches the mission, he is not only forgiven by the natives but he also eventually ends up becoming a Jesuit himself.

And, for a while, everything is perfect.  That is until the Spanish turn over their land in South America to the Portuguese and the new colonials decide that having a mission around will make it a little bit too difficult to enslave the natives.  When Father Gabriel is ordered to close the mission, he refuses to do so.  He says that he will stay and that he is willing to be martyred if the Portuguese forces attack.  Gabriel believes that violence is a sin against God.  Mendoza, on the other hand, announces that he will stay and he is prepared to once again pick up weapons to defend the mission…

Dramatically, The Mission is uneven.  While Jeremy Irons and Liam Neeson are both believable and sympathetic as Father Gabriel and Father Fielding and fit right in with the film’s period setting, Robert De Niro seems miscast and out-of-place.  As good an actor as De Niro is, he just doesn’t belong in the jungles of South America.  Whenever he shows up or speaks, your mind immediately goes to New York City.  The film tries to juggle so many theological and political issues that it can get a bit exhausting trying to keep up with it all.  Watching the film, it was hard not to wish for a chance to see what a director like Werner Herzog or Terrence Malick would have done with the same material.

That said, The Mission is a visually impressive film, one that captures the beauty, the innocence, and the danger of the jungle.  The scenes of both Gabriel and Mendoza climbing the waterfall are stunning to watch and, in the end, the film does have a sincere message about the ongoing fight for the rights of indigenous people.  That counts for something.

The Mission received an Oscar nomination for Best Picture, though it lost to Platoon.  It also won the Palme d’Or, beating out such films as After Hours, Down by Law, Mona Lisa, Runaway Train, and The Sacrifice.