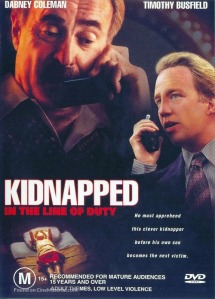 Arthur Milo (Dabney Coleman) is an IRS agent who uses his government position and the powers that with it to commit heinous crimes.  (A corrupt IRS agent?  What a shock!)  Milo kidnaps the children of the wealthy, using legally-filed tax returns to select his target.  Most of his accomplices all have the perfect alibi because they’re all in prison!  As an agent of law enforcement, Milo is able to check them out of prison for hours at a time.  Milo claims that they’re helping him out with an investigation but actually, they’re kidnapping children and digging graves in return for Milo’s help with their tax problems.  Once the crime has been committed, Milo returns them to jail.  It seems like the perfect plan but Milo may have met his match in hard charging FBI agent Pete Honeycutt (Timothy Busfield).

Loosely based on a true story, Kidnapped was the tenth of NBC’s In The Line of Duty films and it was one of the few not to be directed by Dick Lowry.  It’s also the only one of the In The Line of Duty films to not feature a member of law enforcement getting gunned down nor does it end with a title card of statistics about the number of cops who are killed on the job each year.  All of this leads me to suspect that Kidnapped was not originally meant to be an In The Line of Duty movie and that it was added to the series at the last minute.  NBC was obviously hoping that the rating success of Ambush in Waco would rub off on Kidnapped.

Kidnapped is a pretty typical eccentric criminal vs eccentric investigator movie.  Pete is obsessed with taking down Milo and Milo is obsessed with showing up Pete.  It’s not a surprise when Milo starts to personally taunt Pete and it’s also not a surprise that Pete’s family is put at risk.  There are a few strange moments of humor, most of them supplied by Tracey Walter as Milo’s spacey accomplice.  The humor, though, doesn’t always seem to go along with a fact-based story about an IRS agent who abducted children and held them for ransom.

The best thing about the film is Dabney Coleman as Arthur Milo.  Coleman has always been an underrated actor.  Nobody did as good at a job at playing a curmudgeon as Dabney Coleman.  In Kidnapped, Coleman takes his usual persona up a notch by playing Milo as someone who is not just annoyed by people but who is willing to kill them too.  While Arthur Milo’s schemes are usually clever, he’s so arrogant and determined to show off how much smarter he is than everyone else that he’s usually his own worst enemy.  He’s the type of criminal who wears a white suit and a panama hat, despite the fact that his outfit will make him instantly recognizable to anyone who witnesses his crimes.  The character is a strange one but Coleman brings him to life and makes him believable.  Kidnapped is a pretty standard police procedural but worth seeing for Coleman’s villainous turn.