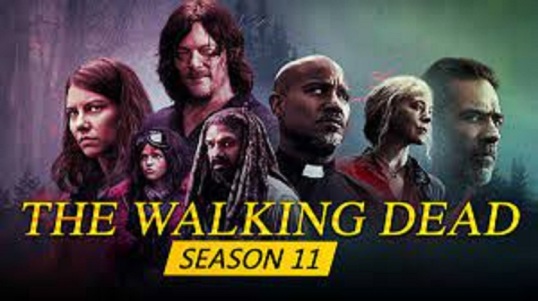 I’ve always wondered how little Herschel would react when he eventually met Negan and learned that Negan was responsible for killing Glenn.

I mean, we all knew that it would happen eventually because, let’s face it …. Maggie and Negan are totally in love!  It’s going to take them a while to admit it, of course.  Maggie’s busy ruling Hilltop like a dictator and Negan’s got a new wife.  Plus, there’s the whole thing where Negan savagely murdered Glenn and then spent a few seasons gloating about it.  I mean, it’s going to take a while to move on from all of that.  Taking all of that into consideration, Lauren Cohan and Jeffrey Dean Morgan still have more legitimate chemistry than anyone else on this show and Maggie and Negan are definitely in love.  Plus, they’re scheduled to get their own spin-off, where they both move to the most romantic city in America, New York!  Not only does that mean that Hilltop is probably screwed (because why else would Maggie leave) but it also means that Maggie and Negan are destined to fall in love while listening to Dean Martin sing That’s Amore.

And the question has always been, how would Herschel react?  Well, this week, we got our answer.  After discovering that bratty little Herschel had snuck into the Apartment Complex, Negan agreed to keep an eye on him while Maggie and the other Hilltoppers continued to fight off a combination of walkers and Commonwealth soldiers.  It didn’t take long for Herschel to figure out that Negan was the man who killed his father.  Herschel pointed a gun at Negan but was eventually talked out of shooting him, proving that Herschel is ready to forgive and it’s time to let the healing begin!

Just as Herschel was discovering that Negan killed Glenn, Darryl was discovering that the Commonwealth isn’t as much of a paradise as he perhaps originally thought.  He and Rosita was ordered by Sebastian to enter his old house and retrieve his cash.  The only problem was that the house was full of walkers!  In not very subtle terms, Sebastian threatened Darryl’s children.  Inside the house, Darryl and Rosita discovered that they were not the first people to be ordered into the House of Death.  There was also April, whose children were also threatened by Sebastian.  Apparently, threatening people’s children is Sebastian’s thing.  Fortunately, Carol and Mercer showed up to help.  Unfortunately, they still had to give the money to Sebastian because he’s Governor Milton’s son and, as a result, doesn’t have to face the consequences of his actions.

This was an okay episode, though it was hard not to feel that the whole thing with the Apartment Complex was a bit overextended.  The Complex invasion could have been wrapped up in one episode instead of stretching it out over two weeks.  That felt like a throwback to the days when almost every episode was Rick talking about something that he was going to do in a future episode as opposed to just going ahead and doing whatever needed to be done.  The Walking Dead has often had a bad habit of stretching things out a bit too far.  As far as the other subplot was concerned, we already know that Commonwealth is a bad place so devoting an entire episode to Darryl finally figuring it out felt a bit superfluous.

That said, the important thing is that this episode reminded us all that Negan and Maggie are totally in love, even if they won’t admit it.  Good for them.  The world may end but love never dies.