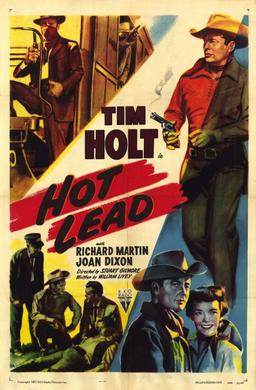 In this B-western programmer, Dave Collins (Ross Elliott) has just been released from prison.  Because he knows how to operate a telegraph, outlaw Turk Thorne (John Dehner) tries to force Dave to get a job at a local telegraph office so that Turk can use his skills to rob a train.

Despite wanting to go straight, Dave also doesn’t want to get full of hot lead.  He rides into town and gets a job at the ranch owned by Gail Martin (Joan Dixon).  He is befriended by Gail’s two ranchhands, serious cowboy Tim Holt (played, believe it or not, by Tim Holt) and his comedy relief sidekick, Chito Rafferty (Richard Martin).  Tim and Chito want revenge on Turk for killing one of their friends during a previous train robbery.  Working with Dave, they set a trap for Turk and his gang.  Meanwhile, Dave falls in love with Gail.

Hot Lead was one of the last of the 46 B-westerns that Tim Holt made for RKO Pictures.  Holt started out playing the type of prototypical happy, go-lucky cowboys who were popular in the 1930s.  At that time, he was unique as one of the few western stars to not play a continuing character who was named after him.  While the studios promoted other western stars as essentially playing themselves, Tim Holt was promoted as being a serious actor.  Holt’s films were popular with audiences but his career was put on hold while he served in World War II.  Post-war, Holt played characters who were far more world-weary than his earlier cowboys and he also started to play characters who were specifically named “Tim Holt.”

Even though most of Holt’s later films were uneven in quality, Hot Lead is one of the better examples of the genre.  Whether happy or serious, Tim Holt was always a convincing cowboy and he brings his natural gravitas to the role, playing his character as being the type of serious and no-nonsense cowboy that anyone would want in their corner.  John Dehner was always a good villain and Ross Elliott is equally good as the man struggling not to go back to his old ways.  The action scenes and the gunfights are well-directed and the story even carries an important message about giving people second chances.  Not bad for a B-western!