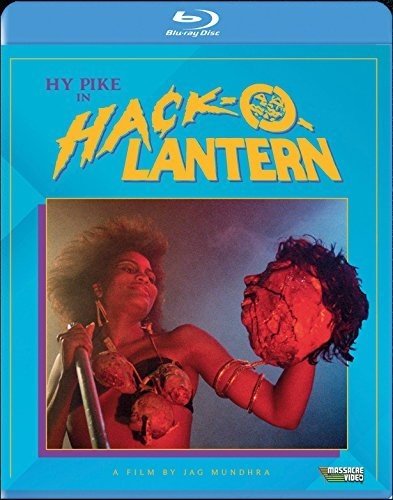 Note that actor Hy Pyke’s name is misspelled on the cover of this Blu-ray.

Sometimes, you just see a film that simply cannot be reviewed in any conventional use of the term and that’s definitely the case with the 1988 slasher/Satanist/rock musical Hack-O-Lantern.

On Friday, I watched Hack-O-Lantern on Shudder.  It was broadcast as a part of Joe Bob Brigg’s Last Drive-In Halloween special.  I watched the film in a bizarre sort of daze, trying to figure out just what the Hell was actually going on.  It’s a film that apparently has a plot but good luck figuring out what exactly that plot is.  I do know that that the film is supposed to be taking place on Halloween night but, in the world of Hack-O-Lantern, Halloween is apparently a time when people get together and dance in a gym or something.  Seriously, it’s a weird movie.

As far as I can tell, the film is about Tommy (Gregory Scott Cummings), who I guess is like the local trouble maker or something.  He spends all of his time listening to heavy metal music and having these elaborate fantasies in which the members of a band rip off his head.  Or, at least, I assume they were meant to be fantasies.  Tommy’s brother, meanwhile, is a local cop and his mother is crazy and overprotective …. I think.  As I said, the film’s plot was not always easy to follow and it actually took me a while to figure out that the earnest and innocent-looking cop was also Tommy’s brother.  To be honest, I’m not really sure that words alone can express just how incoherent the plot of Hack-O-Lantern is.  I could tell you that the film appears to have been edited with a chainsaw but even that would not begin to capture just how difficult it is to understand why one scene follows another in this film.

Anyway, Tommy’s Grandpa (Hy Pyke) might seem like he’s a fun-loving old man but actually, he’s in charge of the local Satanic cult.  He wants to bring Tommy into the cult but apparently, Tommy might be ambivalent or Tommy might just not know that the cult exists.  It’s really hard to figure out what exactly is going on inside of Tommy’s head, beyond the fact that it involves a heavy metal band beheading him.  Grandpa’s plot to turn Tommy into a Satanist somehow leads to several murders at the Halloween dance.  The murderer wears a devil’s mask and kills people in a variety of bloody ways.  If you like cheap but effective gore effects, you’ll get something out of this film.  The scene with shovel is especially nasty.

It’s a bit of a strange Halloween dance, to be honest.  For one thing, there’s a stripper who shows up for no particular reason and who appears to be like 70 years old.  There’s also a stand-up comedian who pops up out of literally nowhere and does this long routine that has nothing to do with Satanism, Halloween, or people getting killed with shovels.  Why is the comedian there?  Why does the film spend so much time on him?  Where does he disappear to after he tells his bizarrely long joke?  These are the type of questions that you’re forced to ponder while trying to figure out what the Hell’s going on in Hack-O-Lantern.

The thing is that, as easy as it is to criticize a film like Hack-O-Lantern, there really is no other film like it.  Sure, there are other slasher films.  There are other films about Satanists.  There are even other films that feature a random stand-up comedian and a lot of gratuitous nudity.  But there are few films that mix all of those elements together quite as incoherently as Hack-O-Lantern.  As such, Hack-O-Lantern is an oddly fascinating film.  You watch the film and you wonder, “How the Hell did this happen?”  And for that reason, it’s worth tracking down and watching.

One response to “The TSL’s Horror Grindhouse: Hack-O-Lantern (dir by Jag Mundhra)”