Let’s just start with the obvious.  Dragons are cool.  Yes, I know that they’re big and they breathe fire and sometimes they burn down cities and trample countries and they’re kind of protective of their gold and all that.  Plus, there’s always the chance that they don’t actually exist.  But no one can deny that dragons just have a certain style to them that makes them the most intriguing of all the possibly imaginary creatures out there.  Surely I’m not the only one who would not have been terribly upset if Smaug had eaten Bilbo during the second Hobbit film.  Add to that, dragons can fly and they can destroy all of your enemies and they’re kind of a cute, too.  They’re like cats, just with more fire-breathing abilities.

The dragon is named a Siveth.  During the Arthurian age, Siveth resides in the kingdom of Wallachia.  (That’s modern day Romania, which is also where Dragonheart: Vengeance was filmed.)  When Siveth first showed up, she was treated as a hero but, when she refused to follow the orders of shady King Razvan (Arturo Muselli), she was exiled out of the land.

Now, 30 years later, Lukas (Jack Kane) is a young farmer whose entire family has been killed by random raiders.  Seeking revenge, Lukas first asks Razvan for help and, when the king turns out to be useless, he then seeks out Siveth.  Following Lukas is Darius (Joseph Millson), a mercenary who has his own past with Siveth.

When Lukas does eventually discover Siveth, he also discovers that Siveth is actually a peace-loving dragon who refuses to help anyone who is only interested in vengeance.  However, through a chain of events that I didn’t quite follow, Siveth does eventually end up working with Lukas and Darius to not only defeat the raiders but to also reveal the identity of the powerful figure who is actually behind all the mayhem.

Dragonheart: Vengeance is likable movie.  It’s a little bit goofy at times but it still has a definite charm to it.  Yes, the plot isn’t always easy to follow, especially if you haven’t seen the other Dragonheart movies.  But you really don’t watch a movie like this for the plot.  You watch it for the dragon and Helena Bonham Carter makes Siveth into a pretty cool dragon.  Jack Kane and Joseph Millson both give likable performances as Lukas and Darius and the film has a nice message about embracing peace and distrusting anyone in authority.  That’s a message we can all get behind, especially when it’s delivered by a dragon! 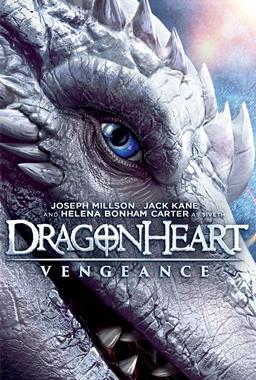 2 responses to “The Films of 2020: Dragonheart: Vengeance (dir by Ivan Silvestrini)”