Last night, Jeff and I watched the 1988 film, Slipping Into Darkness.  It’s available on Prime and we watched it because it looked like it was good, old-fashioned revenge flick.  The plot description said something about a former biker kidnapping the three women who he held responsible for the death of his brother.  It sounded trashy and fun and you know what?  It definitely is trashy and fun.

It’s also one of the most thoroughly incoherent film that I’ve ever seen.

If you were to ask me what I learned from watching Slipping Into Darkness, I would say that I was amazed to discover that it doesn’t hurt to get your fingers shot off.  Seriously, one character loses his fingers and, just a few minutes later, he’s hitching a ride out of town.  (Needless to say, he has to use his other hand to flag down a ride.)  Even though he’s with his friends, no one seems to be too concerned with the fact that he’s just had several of his fingers blown off.  No one says, “Hey, you want to go to the hospital before you bleed to death?”  I don’t think it even occurs to anyone to pick up his fingers.  They just leave them in a cornfield.

The other thing that I discovered is that some people can still do stuff for several minutes after having a switchblade thrown straight into their brain.  I mean, I guess maybe that’s true.  I’ve heard of weird stuff like that happening but it still seems like having a knife sticking out of your forehead would be a bigger deal than it appears to be in this film.

Just from reading those two paragraphs, you might think that this is like an over-the-top Evil Dead-style comedy, where the action is deliberately cartoonish.  What’s strange is that it’s not.  Instead, it’s a rather pretentious film from Nebraska that actually seems like it wants to say something about …. well, something.  I mean, it’s either trying to say something about morality or the director just randomly decided to include several nuns standing in the background of several shots.  You tell me.

Anyway, the film is about three best friends, Carlyle (Michelle Johnson), Genevieve (Anastasia Fielding), and Alex (Cristen Kaufman).  Caryle is rich and self-centered.  Genevieve is obsessed with sex.  And Alex is just kind of there.  When we first see them, they’re flirting with some bikers, who turn out to be less than ideal company.  Later, after they get away from the bikers, they accidentally hit a dog with their Mercedes.  Fortunately, the dog lives and they take it to the vet.  They also take the dog’s owner, Ebin (Neil Barry), with them as well.  Ebin is developmentally disabled so they take him to get ice cream.  One jump cut later and Ebin is getting run over by a train.  A coroner who announces that, when he died, Ebin was covered in ice cream and liquor.

Ebin’s older brother, Fritz (John D’Aquino), is convinced that Ebin’s death was no accident because Ebin didn’t drink.  Maybe the ice cream’s a clue?  After Fritz sees Carlyle returning the dog from the vet, he decides to kidnap the three friends and demand to know what happened to his brother.  Helping Carlyle out are T-Bone (David Sherrill) and Otis (Vyto Ruginis), two of the bikers who the girls met earlier but who are now apparently unrecognizable because they’ve shaved and gotten haircuts.

Following this so far?

So, Fritz and his friends kidnap Carlye and her friends.  And, at first, Carlyle and her friends don’t want to be kidnapped but then, about five minutes, the girls and their kidnappers are suddenly best friends and everyone just kind of forgets about Ebin.  Genevieve and Otis go off to the cemetery together and, when the sun rises, it turns out that Otis has accidentally killed her during a sessions of rough graveyard sex.

What’s odd is that no one — not even Genevieve’s two best friends — seems to be particularly upset about Otis having killed her.  Instead, they just bury her in a nearby grave and then they start do discuss how to best protect Otis.  So, I guess the whole kidnapping thing has been resolved and no one cares about Ebin anymore.

However, it turns out that Otis is too paranoid to be protected.  Running off to a farmhouse, he discovers an old farmer who has committed suicide.  “This is a shit world,” Otis declares.  Soon, everyone’s getting chased through a wheat field by Otis, who has commandeered a thrasher….

And the movie’s not over yet!  But I’m not going to spoil any more of it.  It’s on Prime and you can watch it for yourself.  Slipping Into Darkness is one of the most incoherent films that I’ve ever seen and yet it’s such an incomprehensible mess that it’s actually a lot of fun to watch.  The dialogue is frequently ludicrous and is filled with lines that sound like they were written by an Intro to Philosophy student trying to be profound.  The film is full of jump cuts, which makes it increasingly difficult to understand how once scene relates another.  It’s impossible to keep track of who is friends with who or who is investigating what because everyone’s motivation and mood randomly changes from scene to scene.  At one point, Fritz is obsessed with his brother’s death and then, a few minutes later, he no longer seems to care.  Otis feels guilty about killing Genevieve and then, in the next scene, he’s a giggling sociopath making crude jokes about necrophilia.  Alex hates T-Bone and then she loves T-Bone and then she hates him and then she loves him and seriously, who can keep track?  The entire movie plays out like a fever dream.

Interestingly, a lot of the film’s most important events take place off-screen.  I don’t know if the director was trying to make a statement about the randomness of life or if she just ran out of money before filming certain scenes.  “We just got arrested!” a character cries towards the end of the film before then adding that they also got bailed out.  Well, that’s good.  It would have been nice to have seen that but oh well.  As long as everything works out….

What to make of Slipping Into Darkness?  I have no idea.  It’s on Prime.  Go watch it, let me know if you can figure out what the Hell’s going on. 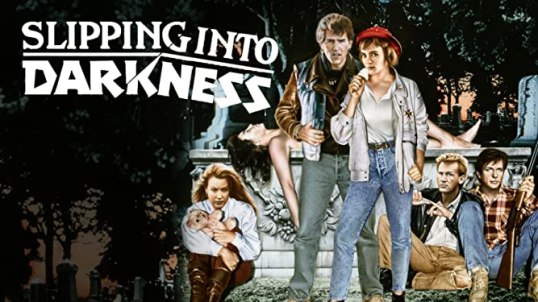 One response to “The TSL’s Grindhouse: Slipping Into Darkness (dir by Eleanor Gaver)”