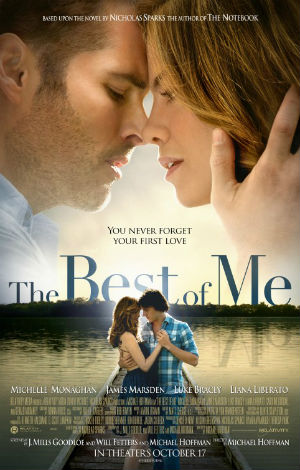 When I wrote my review of The Theory of Everything, I mentioned that Stephen Hawking’s A Brief History of Time made a brief, if important, appearance in another film released earlier this year.  That film, of course, was the latest Nicholas Sparks adaptation, The Best Of Me.

Now, I have to admit that The Best Of Me was one of those forgettable films that I kind of suspected most of our readers would not mind me never getting around to reviewing.  It came out two months ago, it got terrible reviews, and it didn’t do much business at the box office.  I didn’t even enjoy it and I’m the girl who always ends up defending the Twilight films whenever the boys here at the Shattered Lens start to make fun of them.  You can tell the impression that the Rest Of Me made on me by the fact that I just got the name wrong and I didn’t even bother to correct my mistake.

But here’s the thing.  January is rapidly approaching and, with January, comes my annual 16 worst films of the year list.  And chances are that The Best Of Me will appear on that list and I’d like to be able to link to a review.

It’s probably not a shock to hear that The Best Of Me is not a good film.  With the exception of The Notebook, the novels of Nicholas Sparks are not known for inspiring good films.  Instead, they are known for inspiring films about achingly pretty people who meet on the beach, have a melodramatic secret in the past, and ultimately end up falling in love.  And dying, of course.  Somebody always has to die.  The familiar Nicholas Sparks formula actually works pretty well when you’re the one reading his prose and visualizing the story in your head.  That’s largely because you can always imagine yourself as the heroine and maybe James Franco, Bradley Cooper, or Ryan Gosling as the hero.  But, when it comes to making movies out of his books, the end results are often so predictable and uninspired that the Nicholas Sparks drinking game had to be legally banned after scores of single women fell ill with alcohol poisoning.

What we don’t have is much chemistry between the two lead actors.  James Marsden and Michelle Monaghan are both pretty in the way that people in Nicholas Sparks films often are but you never get the feeling that they have much affection for each other.  Even worse, in the flashbacks, their characters are played by two actors (Luke Bracey and Liana Liberato) who look absolutely nothing like James Marsden or Michelle Monaghan.  In particular, it’s impossible to believe that Luke Bracey could ever grow up to look like James Marsden.  I found myself half-expecting a huge twist where Marsden would reveal that he was an intruder.

That would have been a lot more interesting than what we got!  Somebody help me get in touch with Nicholas Sparks!  I’ve got some ideas for his next book!

For a far more memorable look at love and relationships, allow me to suggest The One I Love, a film that was obviously made for a lot less money than The Best of Me but which is also a lot more thought-provoking.

In The One I Love, Mark Duplass and Elisabeth Moss play a couple whose marriage is on the verge of breaking up.  At the suggestion of their friendly-yet-creepy marriage counselor (Ted Danson), they agree to spend a weekend at a beautiful but remote house.  Danson assures them that they will be the only couple at the house. Duplass and Moss agree and, at first, the weekend seems to be working.  However, soon both of them start having conversations and encounters that the other claims to not remember.  Duplass and Moss discover that they are not alone at the house…

And to tell you anything else about the plot would be unfair.  The One I Love is one of those films that works best when the viewer discovers its mysteries at the same time as the characters.  To spoil the film would be a crime.  Let’s just say that there is a twist that will leave you reconsidering everything that you’ve previously seen in the movie.

Beyond that twist, however, The One I Love works for the exact reason that The Best of Me does not.  Moss and Duplass have the chemistry that the leads in The Best Of Me lack.  You believe them both as individuals and as a couple.

So, when it comes time to consider what we talk about when we talk about love, check out The One I Love and leave The Best Of Me behind.

One response to “Talking About Love: The Best of Me (dir by Michael Hoffman) and The One I Love (dir by Charlie McDowell)”