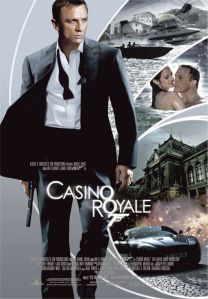 Welcome, one and all! Leading up to the North American release of the latest James Bond film, Skyfall, The Shattered Lens has taken on the task of reviewing each and every one of the twenty two James Bond films that precede it. Today’s is the penultimate review, Casino Royale, the first film of the series to star current-iteration Bond Daniel Craig. It serves as a reboot of the James Bond character, looking back to the beginning of his career, and entirely unconnected from all of the previous films in the series. The only returning actor is Dame Judi Dench, who reprises her role as M, in a more maternal overseer role looking out for a young Bond, despite his rash actions potentially causing trouble for MI6.

Our cold open this time has a black and white Bond confronting a crooked MI6 section chief – one who has been selling secrets to make money on the side. Bond kills both the section chief and his contact, which is enough to earn him his 00-status. The freshly minted 007 heads to Madagascar in pursuit of an international bomb maker. He attempts to find a way to apprehend the bomb maker alive, but is made, and is forced to pursue this man across the city. Bond eventually corners the bomb maker in an embassy building and kills him, blowing up part of the wall, and effecting his escape.

Back in England, M chides Bond for his itchy trigger finger, pointing out that while the world has one less small-time terrorist, they had hoped to get information which would let them fight international terrorism on the organisational level. Bond seems suitably chastened, but M goes further, asserting that she promoted Bond too early, that he is reckless, and a danger. Bond coldly replies that, since the 00-agent’s life is not typically a long one, she will not have to live with her mistake for long.

That’s the sort of Bond that we’re dealing with under the handling of Daniel Craig. While the character is still capable of being charming, he’s a very far cry from Sean Connery’s easy smile and one liners, or Pierce Brosnan’s especially terrible puns. This is sort of the crux of the movie; what controversy exists surrounding its qualities is heavily tied into how you respond to this new take on James Bond. Like all things 2000s, our hero is much grittier than before. Absent is all of Q’s high tech wizardry, and as I stated before, we are not even dealing with a seasoned killer in James Bond, but rather a freshly minted 00 agent. As a result of all these factors, this film has a distinctly different feel from every Bond produced before it. If you like the changes, everything is cool. If you don’t, you may still find yourself appreciating Casino Royale, which has a relatively simple plot, but spends quite a bit of effort on setting up and establishing its characters, including this new James Bond, for the audience.

The main plot of Casino Royale revolves around a high-stakes Texas Hold ‘Em tournament held at the titular casino, located in Montenegro. James Bond is assigned to win the tournament which is being staged by terrorist financier Le Chiffre (Mads Mikkelsen) to recoup the terrible losses he suffered when he used the money of his clients to short sell stock, predicting that a terrorist strike which he himself had planned would send prices into free fall. M hopes that by pushing Le Chiffre to the point of desperation, they can force him to cut a deal with MI6 – sanctuary in exchange for everything he knows about terrorists around the world. Bond is assisted in his goal by fellow MI6 agent Rene Mathis (Giancarlo Giannini) and Vesper Lynd (Eva Green), this iteration’s Bond girl, an agent from HM Treasury, who is assigned to manage Bond’s $10M buy-in, and to provide him with a $5M re-buy if she believes it would be a good investment. However, since a failure on Bond’s part would mean that Her Majesty’s Treasury was directly funding international terrorism, there is incentive to be cautious.

It takes us nearly an hour to begin to engage in the meat of the film, at the titular Casino Royale. Or, at least, this should be the meat of the film. However, the structure of Casino Royale is a little bit off. It feels like it has enough action, but it doesn’t feel properly paced, with the front half of the film (really just a series of subplots to get us to Montenegro) feels like classic “action Bond”. The scenes in the Casino could have been pulled (well, if Daniel Craig could smile, at any rate) from any other Bond film, as his history is littered with a rich litany of casino sequences. Before and after the casino sequences, however, are framing bits that involve idyllic locations, and if I may be so bold, it doesn’t exactly zoom along. The spacing between the casino sequences and the finale, in particular, made the final act feel very tacked on and a little out of place, even as deliberately intended setup for Quantum of Solace. This can also be off-putting, as it feels like there are two different movies going on here.

For the most part though, I think Casino Royale works. If you can live with a grimmer, grittier, low-talking James Bond, you may really appreciate this low-tech return to basics for our favourite 00-agent.

Tomorrow you’ll get a healthy dose of Quantum of Solace, but before I sign off, let me leave you with the theme from Casino Royale, one of the cooler James Bond themes in the franchise, performed by Chris Cornell.