As part of my continuing effort to offer up a review of every 2011 release that I’ve seen so far this year, here’s 8 more quickie reviews of some of the films that I’ve seen over the past year.

The 13 Assassins are a group of samurai who are gathered together to assassinate a sociopathic nobleman in 19th Century Japan.  As directed by Takashi Miike, this is a visually stunning film full of nonstop, brutal action and Miike powerfully contrasts the old school honor of the 13 Assassins with the soulless evil of their target. 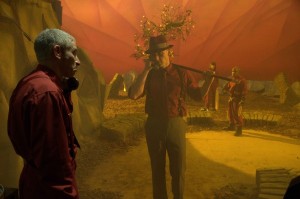 There are some films that simply have to be seen to believed and Bunraku is one of those films.  In the aftermath of a global war, guns have been outlawed but this attempt at social engineering has just resulted in greater societal collapse.  Nicola (Ron Perlman) is the most powerful man on the East Coast but he lives life in paranoid seclusion and instead sends out nine assassins to enforce his will (his main assassin being Killer No. 2, played by a super stylish Kevin McKidd).  Two strangers ( a drifter played by Josh Hartnett and a samurai played by Gackt) arrive in town and, with the help of a bartender played by Woody Harrelson, they team up to destroy the nine assassins and ultimately Nicola himself.  Bunraku, which comes complete with an ominous narrator and sets that look like they belong in a Lars Von Trier film, is a glorious and fast-paced triumph of style over substance, an exciting and fun celebration of the grindhouse films of the past.  With the exception of a miscast Demi Moore (playing Perlman’s mistress), the film is very well-acted but it’s completely stolen and dominated by Kevin McKidd, who can poke me with his sword any time he wants.

It took The Double Hour about two years to make it over here from Italy and when it did finally play in American arthouse theaters, it really didn’t get as much attention as it deserved.  That’s a shame because the Double Hour is a pretty entertaining mystery-thriller that’s full of twists and turns and which features an excellent performance by Kseniya Rappoport as an enigmatic hotel maid.  It hasn’t been released on region 1 DVD or blu-ray yet but apparently, there’s some interest in doing an American remake which will probably suck.

Jig is a documentary that follows several competitors at the 40th Irish Dancing World Championships held in Glasgow in 2010.  I always try to be honest about my personal biases and I have to admit that one reason why I absolutely loved this film is because I not only love to dance but I love Irish stepdancing in specific and, as much as I love ballet, stepdance will always hold a special place in my heart.  I’m not quite sure how to put it into words other then to say that it just makes me incredibly happy as both a participant and a  watcher.  For me, Jig captured that joy as well as showing just how much dedication and sacrifice it takes to truly become proficient at it.  This film — much like Black Swan — made me dance.

I’ll never forget going to the Cinemark West Plano and seeing Meek’s Cutoff last May.  The theater was nearly deserted except for me, Jeff, an elderly couple, and two women who were, in their appearance and manner, almost stereotypically upper middle class suburban.  As the film’s frustratingly ambiguous conclusion played out on-screen and the end credits started to roll, one of the women angrily exclaimed, “WHAT!?  Well, that won’t win any Academy Awards!”  In many ways, Meek’s Cutoff is a frustrating film.  Based on a true story, it follows a group of 19th century settlers as they try to cross the Oregon Trail while following a guide (Bruce Greenwood) who might be totally incompetent.  Plotwise, not much happens: the settlers kidnap an Indian and demand that he lead them to water, Michelle Williams plays a settler who doubts that any of the men in the party know what they’re doing, and everyone continues to keep moving in search of … something.  The film is, at times, really frustrating and I think it’s been overrated by most critics but, at the same time, it remains an oddly fascinating meditation on life and fate.  Add to that, both Greenwood and Williams give good performances and the film’s cinematography is hauntingly beautiful and desolate at the same time. 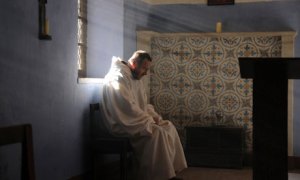 6) Of Gods and Men(dir. by Xavier Beauvois)

Of Gods and Men is a quietly powerful and visually stunning French film that’s based on the true story of 7 Trappist monks who were kidnapped from their monastery and murdered by muslim rebels during the Algerian Civil War.  The film imagines the final days of the monks and attempts to answer the question of why they didn’t flee their monastery when they had the opportunity to do so, but instead remained and chose to accept their fate as martyrs.  This meditative film also features excellent performances from Lambert Wilson and Michael Lonsdale and avoids the trap of both easy idealization and easy villainy.

This is another one of those films that was dismissed by almost every critic except for Roger Ebert and you know what?  For once, I’m going to agree with Roger.  I absolutely loved One Day and I think that all the haters out there need to take a chance on romance and stop coasting on the easy cynicism.  One Day follows the love affair of a writer (Anne Hathaway) and a TV personality (Jim Sturgess), visiting them repeatedly on the same day over the course of 20 years.  The film starts with them as college students having a wonderfully awkward one night stand and it ends with Sturgess and their son walking up a beautiful green hill and it made me cry and cry.  Hathaway and Sturgess have a wonderful chemistry together and the film also features some good supporting performances from Patricia Clarkson (as Sturgess’ dying mother) and Rafe Spall (bringing humanity to the thankless role of being the “other guy.”) This is one of the most deliriously romantic films that I’ve ever seen and I loved it.  So there.

There Be Dragons came out in May and it didn’t get much respect from the critics.  I’ve also read that it was considered to be a box office failure, which is odd because I seem to remember that it was actually in theaters for quite some time.  Anyway, There Be Dragons is an oddly old-fashioned war epic that attempts to mix the fictional story of a Spanish revolutionary (played by Wes Bentley) with an admiring biopic of the founder of Orpus Dei, St. Josemarie Escriva (played by Charlie Cox).  The two stories never really seem mix and instead, they just coexist uncomfortably beside each other.  It doesn’t help that Wes Bentley gives one of the worst performance of 2011.  On the plus side, Charlie Cox gives a good and believable performance as Escriva and the film looks great.  The film is so sincere in its desire to make the world a better place that its hard not to regret that it doesn’t succeed.

6 responses to “8 Quickies With Lisa Marie: 13 Assassins, Bunraku, The Double Hour, Jig, Meek’s Cutoff, Of Gods and Men, One Day, and There Be Dragons”