As a genre, film noir has always been associated with crime: murder, brutish gangsters, seductive femme fatales, and occasionally a cynical private detective doing the right thing almost despite himself.  However, not all film noirs are about criminals.  Some are just about desperate characters who have found themselves on the fringes, living in a shadow-filled world that appears to be monstrously indifferent to all human suffering.

That’s certainly the case with the 1951 noir, 14 Hours.  The film centers around Robert Cosick (Richard Basehart, who previously played a murderer in another classic noir, He Walked By Night).  Robert isn’t a gangster.  He’s not a private detective.  He doesn’t carry a gun and he doesn’t provide any sort of hard-boiled narration.  In fact, for the majority of the film, Robert is defined by less who he is and more by what he’s doing.  Robert Cosick, having earlier checked into a room on the 15th floor of a New York hotel, has climbed out of a window and is now standing on a ledge.  Robert says that he’s going to jump.

What has driven Robert Cosik to consider such an extreme action?  The film never settles on any one reason, though it gives us several clues.  When his father (Robert Keith) and his mother (Agnes Moorehead) show up at the scene, they immediately start bickering about old family dramas.  When Robert’s ex-fiancee (Barbara Bel Geddes) begs him to step in from the ledge, he listens a bit more to her than he did to his parents but he still refuses to come in from the ledge.

But perhaps the real reason that Robert Cosick is out on that ledge can be found in the film’s shadowy visuals.  Directed in a semi-documentary fashion by Henry Hathaway and featuring harsh, black-and-white cinematography that’s credited to Joe MacDonald, Fourteen Hours emphasizes the indifference of the city.  From the menacing landscape of concrete buildings to the crowds gathering below the ledge to see if Robert lives or dies,  New York City is as much as a character in this film as Robert, his family, or the cop (played by Paul Douglas) who finds himself trying to talk Robert into reentering his hotel room.  When night falls, the city may light up but it does nothing to alleviate the shadows that seem to be wrapping themselves around Robert.  For the fourteen hours that Robert is on that ledge, he may be the center of the world but the film leaves little doubt that New York City will continue to exist in all of its glory and its horror regardless of how Robert’s drama plays out.  Whether he lives or dies, Robert appears to be destined to be forgotten.

When the film isn’t concentrating on the cops trying to talk Robert into getting back in the hotel room, it shows us the reactions of the people who see him standing out on that ledge.  (If this film were made today, everyone would be holding up their phones and uploading Robert’s plight to social media.)  Some people are moved by Robert’s struggle.  For instance, a young woman played by Grace Kelly (in her film debut) reaches a decision on whether or not to get a divorce based on what she sees happening on the ledge.  Two office workers (played by Jeffrey Hunter and Debra Paget) even strike up a romance as they wait to see what will happen.  Some people view Robert as being a madman.  Others see him as being a victim.  And then there’s the many others who view him as being either a minor distraction or a piece of entertainment.  For them, it’s less important why Robert’s on the ledge or even who Robert is.  What’s important to them is how the story is going to end.

It’s not a particularly happy film but it’s made watchable by Hathaway’s intelligent direction and the performances of Paul Douglas and Richard Basehart.  With its theme of instant fame and hollow indifference, it’s a film that remains as relevant today as when it was initially released. 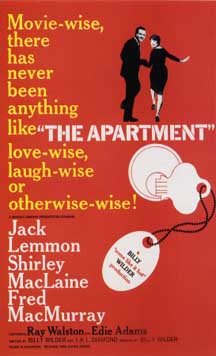 The Apartment tells the story of C.C. “Bud” Baxter (Jack Lemmon), an anonymous officer worker who is determined to climb the corporate ladder despite not being very good at his job.  However, Baxter does have one advantage over his co-workers.  He’s single and therefore, his apartment has become the place to go for corporate executives who need a place where they can safely cheat on their wives.  Bud spends his day trying to coordinate who is going to be in his apartment and when.  Meanwhile, he spends his nights exiled from his own home and wandering around New York.  In fact, the only beneficial thing about this arrangement is that all of Bud’s supervisors have been giving him good evaluations in return for using his apartment.  (Well, that and Bud’s neighbor, played by Jack Kruschen, is convinced, based on the thinness of the apartment walls, that Bud must be a great lover.)

When Bud finally does get his promotion, it’s only because the personnel director, Jeff D. Sheldrake (an amazingly sleazy Fred MacMurray), wants to use Bud’s apartment.  Bud celebrates his promotion by finally working up the courage to ask out Fran (Shirley MacClaine), an elevator operator who works in the office.  What Bud doesn’t realize is that Fran is also the woman who Sheldrake wants to bring to the apartment….

Fran is convinced that Sheldrake is going to leave his wife for her.  What she doesn’t realize — and what Fred MacMurray’s performance makes disturbingly clear — is that Jeff Sheldrake is basically just a guy having a midlife crisis.  He’s the type of middle-aged guy that every woman has had to deal with at some point, the guy who pulls up next to you in a red convertible and stares at you from behind his sunglasses, attempting his best to entice you into helping him relive the youth that he never had.  When Fran eventually learns the truth about Sheldrake, it leads both to near tragedy and to Bud having to decide whether he wants to be a decent human being or if he wants to keep climbing the corporate ladder.

Because it’s more interested in people than in spectacle, The Apartment holds up better than many past best picture winners.  We’ve all known someone like Bud.  We’ve all had to deal with men like Sheldrake.  And, in one way or another, we all know what it’s like to be someone like Fran.  The Apartment remains a truly poignant and relevant film.