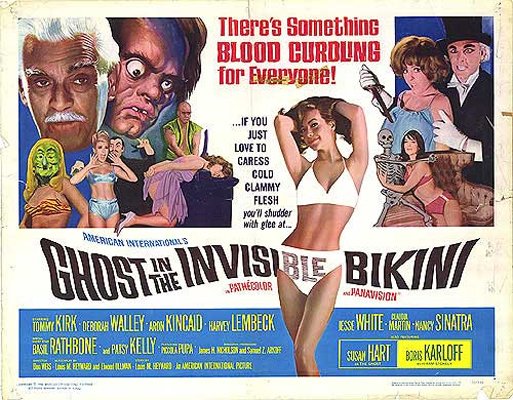 The 1966 film, The Ghost In The Invisible Bikini, asks the question, “What can you do if you want to have a beach party but you don’t have a beach?”

Seriously, a pool is just as good as a beach and fortunately, Chuck (Tommy Kirk) has a pool where his friends can hang out and listen as Vicki (Nancy Sinatra) sings a song.  It’s in a big old mansion and hey, it might be haunted.  It used to belong to Hiram Stokeley (Boris Karloff) and he’s dead now so he certainly won’t mind, right?

Oh wait, actually, he is dead.  But he’s still hanging around.  It turns out that he needs to do at least one good deed in order to get into Heaven.  (Isn’t starring in Frankenstein enough?  I mean, c’mon…..)  It also turns that Hiram only has 24 hours to do that good deed or it’s off to Hell for him.  Maybe he could figure out a way to help Chuck and his family win his fortune!  Hiram enlists the help of his long-dead girlfriend, Cecily (Susan Hart).  Cecily, we are told, is wearing an invisible bikini but we just have to take the film’s word on that because it’s invisible and, seeing as how Cecily’s a ghost, it’s always possible that only reason she’s transparent is because she’s a spirit.  I mean, seriously, who knows how ghosts work?

Anyway, it’s not going to be easy for Hiram and Cecily to ensure that Chuck inherits that fortune, largely because Chuck and all of his friends are idiots.  The other problem is that Reginald Ripper (Basil Rathbone), Hiram’s lawyer, is determined to win that money for himself and, if you have any doubt that he’s a bad dude, just check out his name.  GOOD PEOPLE ARE NOT NAMED REGINALD RIPPER!  Fortunately, even though Reginald graduated from law school and is played by Basil freaking Rathbone, he’s still an idiot and he comes up with the stupidest plan possible to get Chuck and friends out of the house.

He’s going to make them think that it’s haunted!

Reginald’s plan is to have his evil associates, J. Sinister Hulk (Jesse White), Chicken Feather (Benny Rubin), and Princess Yolanda (Bobbi Shaw), pretend to be monsters and ghosts in order to scare all of the teens out of the house.  He also enlists his daughter, Sinistra (Quinn O’Hara), to help but Sinistra isn’t really bad.  She’s just extremely near-sighted and someone thought it would be a good idea to name her Sinistra.

And then the bikers show up!  This is one of AIP’s beach party films so, of course, there are bikers.  Eric von Zipper (Harvey Lembeck) shows up and pretends to be Marlon Brando in The Wild One.  Of course, at the time this film was made, the real Marlon Brando was filming Arthur Penn’s The Chase so I’m going to guess that Harvey Lembeck probably had more fun pretending to be Brando than Brando was having being himself….

Anyway, this is a stupid movie even by the standards of the AIP beach party films.  It’s also notably disjointed.  That probably has something to do with the fact that Karloff and Susan Hart weren’t actually added to the film until after the movie had already been shot.  Apparently, AIP felt that the first cut of the movie was missing something so they said, “Let’s toss in a little Karloff!”  Of course, Boris Karloff was such an old charmer that it doesn’t matter that he doesn’t ever really interact with anyone other than Susan Hart over the course of the film.  You’re just happy to see him.

So yeah, technically, this is not a good film but, at the same time, you kind of know what you’re getting into when you watch a movie called The Ghost In The Invisible Bikini.  The jokes fall flat.  The songs are forgettable.  But the whole thing is such a product of its time that it’s always watchable from an anthropological perspective.  Add to that, you get Boris Karloff and Basil Rathbone, doing what they had to do to pay the bills and somehow surviving with their dignity intact.  Good for them.

Welcome back to Drive-In Saturday Night! Summer’s here, and the time is right for a double dose of American-International teen flicks, so pull in, pull up a speaker to hang on your car window, and enjoy our first feature, 1964’s BIKINI BEACH, starring Frankie Avalon and Annette Funicello:

BIKINI BEACH is the third of AIP’s ‘Beach Party’ movies, and this one’s a typical hodgepodge of music, comedy, and the usual teenage shenanigans. The gang’s all here, heading to the beach on spring break for surfing and swinging. This time around, there’s a newcomer on the sand, British rock star The Potato Bug, with Frankie playing a dual role. Potato Bug is an obvious spoof of the big Beatlemania fever sweeping the country, with all the beach chicks (or “birds”, as he calls ’em) screaming whenever PB starts singing one of his songs, complete with Lennon/McCartney-esque “Wooos” and “Yeah, yeah, yeahs”… 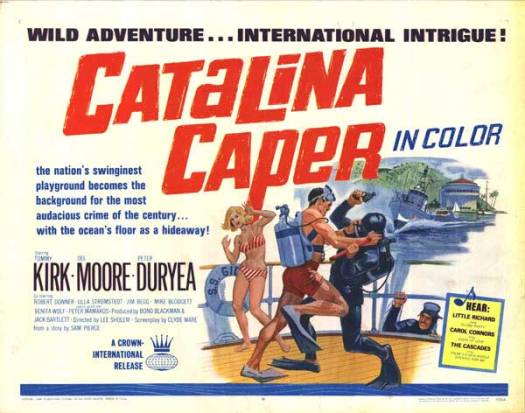 Beach Party movies had run their course by 1967, as AIP released their final entry in the surf cycle, THE GHOST IN THE INVISIBLE BIKINI, with Tommy Kirk  and Deborah Walley replacing Frankie and Annette , and nary a beach in sight. Crown International Pictures, AIP ‘s impoverished cousin (if one can imagine!), produced what is considered the last of the genre, CATALINA CAPER, also starring Kirk and a cast of dozens.

CATALINA CAPER is basically an lame excuse to get a bunch of young hardbodies on the beach and let ’em dance around to some dated rock music. Believe it or not, there’s a plot (though not a very good one) involving the theft of an ancient Chinese scroll masterminded by one of the teen’s con artist parents (Del Moore, Sue Casey) and a gangster trying to get ahold of it. There’s also a subplot (imagine that!) about Kirk torn between his bud’s sister (Venita Wolf) and a…

IT’S A BIKINI WORLD is one of the lowest of the low-budget “Beach Party” ripoffs you’ll ever see. Yet it has a certain charm to it, a likeable little “battle of the sexes” soufflé featuring some great 60’s rock acts and the undeniable appeal of beach bunny Deborah Walley.

Beach stud Mike Samson goes gaga for knockout new redhead Delilah Dawes (Samson and Delilah, get it?). She thinks he’s an egotistical jerk and gives him the big freeze-out, telling him she prefers the “serious type”, so Mike dons a pair of thick glasses and some nerdy duds, passing himself off as intellectual brother “Herbert”. Herbert takes her to museums and zoos, while Mike competes with her in skateboarding and boat races run by local customizer Daddy, owner of hangout The Dungeon. Delilah discovers Mike’s scam, and they compete in a final Cross Country Race that consists of car racing, motorcycles…