I am reviewing these four episodes as a block because only 25 minutes mattered combined.  In fact, the show rapidly devolved into gross out scenes, cartoonish hijinks, cartoonish Russians, and a terrible song and dance number duo….really.  The only way this season could get rave reviews is if the reviewer binged the show and was too tired to analyze it.  I get it- you’re around your friend(s), your girlfriend is virtual, and you can barely afford your Brooklyn apartment on your blogger salary; however, that doesn’t mean you shouldn’t be critical of a show that really should just go away.

I’m adding on to my review here to discuss what makes Stranger Things so terrible now.  This series was heavily influenced by Stephen King and likely Salem’s Lot because of the repeated Vampire monsters.  More importantly, season 1 was great for the same reason that Stephen King’s stories are great- It’s not about the monster in the house; it’s about how the people are living in house with a monster.  These are your neighbors and now have to deal with something beyond reality and that was exactly what Stranger Things Season 1 was about.  There is one other theme that make Stephen King’s stories terrifying: it’s not Randall Flagg, the Werewolves, The Clowns; it’s about people who are supposed to be caring for you, but in fact do not.  This theme is in nearly every Stephen King book and it was present in Stranger Things Season 1.  El called Evil Modine “Papa” even though he was an abusive kidnapper who didn’t think anything more about El than a piece of lab equipment.  The series now has left all those themes behind to become a husk.

The last four episodes broke discretely into three distinct and equally boring and poorly executed quests: 1) Joyce, Hop, Alexi, and Weirdo try to destroy the machine opening the gate. 2) Dustin, Erica, Steve, and Robin try to escape the bunker and annoy everyone. 3) The original gang drag El around so she can get her ass beat.

Episodes 4 – 7:  Joyce and Hop go through town looking for answers and end up kidnapping a Russian engineer – Alexi.  They take him to the creepy weird guy from last season and without any story arc Alexi is all in to help.  He gives them schematics to infiltrate the Starcourt Mall underground bunker and how to destroy the machine.  Why does Alexi do all this? Who knows?  It’s a good thing Alexi is so detailed because he dies later and it doesn’t matter.  But, we do get A LOT of corny banter and goofy car scenes:

Hop steals this car in the most corny and unrealistic way possible.  It’s corny, but it makes up for it by being cartoonish and boring.  There are A LOT of scenes where they are driving around and mostly Joyce yells a lot at Hop and Hop yells at Joyce for roughly 38 times.  It’s really dull.  They manage to infiltrate the base eventually try to destroy the machine.  Do they make it?  We have to get through many many pratfalls to find out .. wakka wakka wakka.

Dustin, Erica, Steve, and Robin infiltrate the base…..and Steve and Robin get caught right away.  This could have been a great suspenseful plot point, but instead we get hijinks!!! A goofy Russian General who makes this face a lot: 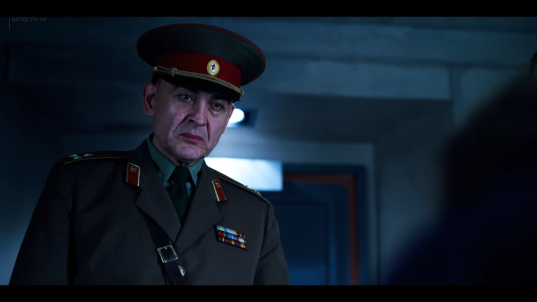 This “torture” sequence goes on for a long long long while and really goes nowhere, which is especially disappointing because there were a couple of episodes that had real suspense.  Instead now, we get this comic book torture guy:

It’s really goofy.  It’s like the Duffer Brothers couldn’t figure out if this show was horror, comedy, or just paint by numbers garbage.  Dustin manages to bust Robin and Steve out because that’s super believable after making Dustin the LEAST physical of the bunch for 2.8 seasons.

El and the gang start to battle with the least effective monster ever.  For a Big Bad Vampire monster, it can’t see very well, it has a vague agenda, and it’s unclear what can actually kill it until the penultimate episode, which sets up Hop’s likely death.  Yes, it looks gross: 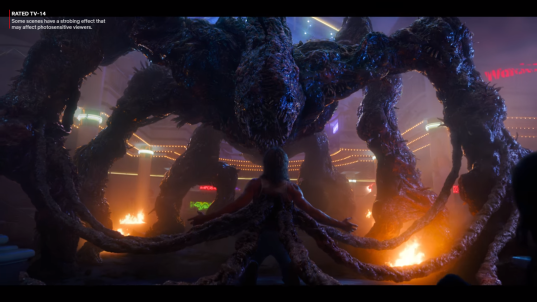 BUT it’s REALLY REALLY bad at finding and killing things that matter.

They, of course, manage to kill off the big bad, but that was never really in doubt.  What was amazing is how the writers derailed the story in favor of WACKINESS!

The “scary” general goofs around A LOT:

So funny how it derails the suspense. Sigh.

There is car driving wackiness: 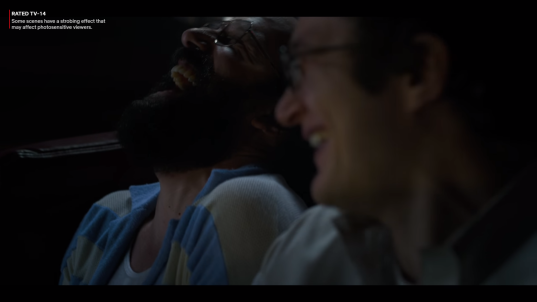 Above: a not funny joke was made. They laughed for a very long time.  The person on the right is Alexis.  He dies and it doesn’t matter.

The big fight with the big bad where Hop gets sacrificed: the show ruined itself.  It didn’t just go for wackiness; it stalled the epic last monster fight scene where everyone is about to die for a no kidding Song and Dance sequence- REALLY! 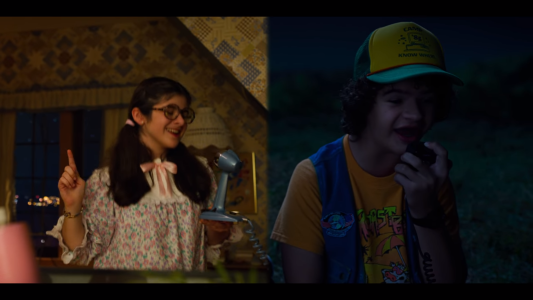 I remember when this song sequence started because I was young man with two newborns.  When it ended, I was sending my girls off to college.  The third picture? Yep, that’s a split screen singing moment.  It …. just….kept… going.  I was really rooting for the Monster.

Did the first four episodes give me hope? Yes, but that hope and good will was squandered by plain old corny scenes and cartoonish sequences.  Maybe, we all entered  the upside down because there is no way a third season like this should have made it to daylight without all laws of physics and reason being reversed.

Episode 4 had a lot going on.  It’s like the show doesn’t know how to maintain suspense from one episode to the next.  The previous episode had nothin goin on and this one was like 10 pound sausage in a 5 pound bag.  This is actually a pretty good season and the creators know that they peaked in the first season because of the incessant flashback clips to season 1.

We open with Heather and Mullet-Renfield setting up her parents to be disgustingly consumed/converted by the Monster Vampire- It’s Gross!  Of course, after following the NXIVM case, maybe we should let the Vampire Monster win?  Are we really that great that ya know we DESERVE to live.

This season is all about breaking up, reuniting, and moving on.  Dustin is breaking away and making older friends.  I’m pretty sure that Will is about to come out- Good for Him and good for the show!

Speaking of Dustin, he, Robin, and Steve are trying really hard to infiltrate the Russian mall area and they recruit Erica (Sister of Lucas) to do it.  I gotta write that she was a scene stealer.  It’s clear to me that she could be a huge star.  Erica fits through the air vents, which are actually normal sized- Good work set department.  When they enter the secret room, they hit a BAD button and they accidentally go DEEP underground.

Hop and Joyce are on the hunt for information and they get it by beating the snot out of a very smarmy Mayor (Carey Elwes) we learn that he was on the take with the Russians, the Russians own the mall, and they are buying up most of the town.  Evil Mall, Evil Russians, Evil Food Court!

The kids get back together to do battle with Mullet-Renfield.  They surmise that because the creature likes cold, they will lock Mullet-Renfield in the pool sauna.  And…. it kinda works?  They manage to activate Mullet-Guy into a vampire drone, but El, unlike previous seasons, gets her ass beat.  It’s brutal.  She does throw Mullet-guy through a wall, but why do this anyway?  Did they really need to prove his guilt?  They could’ve just followed him back to his evil lair and he wouldn’t have known they were on them.  The problem they all took their stupid pills off camera. Kids yesterday?

It would seem that we have reached a major Arc Spin-around.  It would make sense for all the heroes to lose a lot soon.  Hop will probably lose his job, Mullet-Renfield has amassed an army for the Sticky Vampire Monster, The Russians are evilling, and Dustin, Robin, Erica and Steve are going down a mineshaft.

Side plot: Creeper and Nancy get fired from the paper by the converted Editor, but she will keep pursuing the story …. for some reason.  Nancy, why not just go to community college? What are wasting your time for?  Is this Barb guilt?

It’s looking grim, BUT this is a good thing.  This season is actually keeping my interest and has real suspense even if the episodes themselves are uneven.  I’m not sure the series deserves another season yet; so, I’m hoping they give some closure this season.