Welcome to Retro Television Reviews, a feature where we review some of our favorite and least favorite shows of the past!  On Sundays, I will be reviewing the made-for-television movies that used to be a primetime mainstay.  Today’s film is 1974’s The Elevator!  It  can be viewed on YouTube! 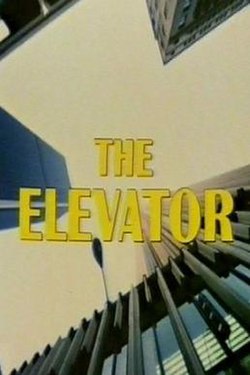 Marvin Ellis (Roddy McDowall) hates his job.  He’s been assigned to be the manager of a new high-rise office building.  Parts of the building are still under construction but that hasn’t stopped the company that owns it from selling out office space.  When Mrs. Kenyon (Myrna Loy) comes by and asks to look at the top floor penthouse, Ellis agrees.  In public, Ellis is always friendly and always courteous.  It’s only under the most stressful of circumstances that Ellis reveals that he feels as if the building has been built of out lies and cheap material.

Ellis and Kenyon soon find themselves in a stressful situation when they are trapped in an elevator.  Of course, they’re not alone in the elevator.  There’s also Dr. Reynolds (Craig Stevens), his wife (Teresa Wright), and his mistress (Arlene Golonka).  And then there’s Robert Peters (Barry Livingston), a teenager who has inherited a fortune.  And finally, there’s Eddie Holcomb (James Farentino).  Eddie has a suitcase full of money that he’s stolen from an office in the building.  He’s also got a loaded gun.  And, perhaps worst of all, he has an intense fear of tight places.  The longer that he’s trapped in the elevator, the worse his claustrophobia becomes.

Because the building isn’t really finished yet, the elevator’s alarm button doesn’t really work.  Other than the passengers trapped inside, the only people who know about the stalled elevator are Eddie’s partners-in-crime.  Irene (Carol Lynley) is Eddie’s girlfriend and she just wants to get the situation resolved with as little violence as possible.  Pete (Don Stroud) is Eddie’s sociopathic friend.  Pete is not only determined to rescue Eddie and retrieve the suitcase.  He’s also determined to take care of any potential witnesses by killing everyone on the elevator.

The Elevator is a disaster film, along the lines of Airport and The Towering Inferno.  Due to the hubris of a faceless corporation, a group of people find themselves trapped in a potentially catastrophic situation.  Some of them react with bravery.  Some of them react with cowardice.  All of them get a chance to reveal a bit of who they are on the inside.  Some might say that being trapped in an elevator is not quite as bad being trapped in a fiery skyscraper or being a passenger on a airplane that’s being held hostage by a mad bomber.  Technically, they’re right but I am also going to admit right now that I absolutely hate elevators and I try to avoid them whenever I can.  I always say that this is because running up and down several flights of stairs is a good way to keep my legs looking good and certainly that’s part of it.  But an even bigger reason is that I dread the thought of being stuck in a confined space with a bunch of strangers.  If I was on an elevator that was stuck between floors, I would probably lose my mind.  I have a hard enough time just standing in line for longer than 3 minutes.  As directed by Jerry Jameson, The Elevator does as good job of capturing the feeling of being trapped in a small space.  It’s not a film to watch if you have claustrophobia.

As for the cast, Myrna Loy is a delight as the eccentric Mrs. Kenyon.  And seriously, how can you dislike any film that gives Roddy McDowall a monologue about how much he hates skyscrapers?  It’s an entertaining, if undemanding, film.  After watching The Elevator, I’ll keep taking the stairs.

One response to “Retro Television Reviews: The Elevator (dir by Jerry Jameson)”