Welcome to Retro Television Reviews, a new feature where we review some of our favorite and least favorite shows of the past!  On Fridays, I will be reviewing One World, which ran on NBC from 1998 to 2001.  The entire show is currently streaming on Tubi! 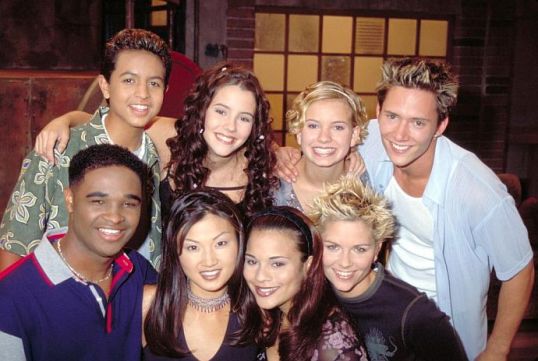 The Cast of One World

This week, the second season of One World comes to an end!  Will we all still be living in one world once it’s over?

Finally, Sui gets a storyline!

When Marci sets up a charity date auction at Miami’s “hottest under-21 club,” The Warehouse, Sui is purchased by a guy named Scott (Jason Strickland) and …. ugh, this is cringey already.  Anyway, Scott turns out to be kind of dorky and Sui doesn’t really want to date him but Scott decides that he’s totally in love with her and insists that she is actually in love with him too.  Scott even befriends Dave so that he can hang out in the Blake House with Sui.  Needless to say, Scott’s behavior is stalkerish and more than a little disturbing but the show plays it for laughs.  Ugh, poor Sui.

Meanwhile, Ben is purchased by a woman with whom he has little in common and Cray is purchased by an old woman who needs him to do some yard work.  Wait a minute …. the Warehouse had an auction in which they sold someone to do manual labor for free?  This is seriously icky.

Meanwhile, Jane has suddenly decided that she wants to go to college but, after 12 years of goofing off, she knows that there is no way she’s going to do well on the SAT.  Since St. Neal is a genius, he tries to tutor her.  Jane suggests just cheating instead but Neal is like, “No!  Cheating is wrong!”  (He may be right but, on the other hand, cheating is the only way I passed Algebra.)  However, when they take the test, Neal realizes that Jane is struggling and he allows her to copy his answers.  Good for you, Neal!  Your sister deserves a future.

Uh-oh!  The SAT proctor noticed what they were doing and, as a result, their tests are thrown out and they’re both told that they will never be allowed to retake the SAT.  Jane confesses to cheating but lies and says that Neal had nothing to do with it.  Neal announces that he will not lie and will instead accept his punishment.  St. Neal says that he’s not going to give up on getting into college, even if it’s going to take him longer now.  St. Neal also asks to be allowed to see what his score would have been.

Neal replies, “Let’s just say that mom and dad would have been very proud of us …. IF WE HADN’T CHEATED!”

And that’s how the episode ends!  Seriously, what a dark world!

Anyway, my main impression of this episode is that Neal is a complete chump.  After spending two seasons working hard and trying to make something of himself and talking about how important it was to him to go to an Ivy League college, Neal threw it all away for someone who probably would have ended up dropping out of college anyways.  Call me a cynic but I doubt this sort of thing would happen in real life.

According to the imdb trivia page, this episode was originally supposed to air on September 25, 1999 but it was pushed back to January 1st.  I guess that’s why no one mentions the fact that both Jane and Neal have thrown away their futures.  This also means that, originally, the plan for the second season of One World was for it to end with Neal and Jane getting busted for cheating.  That would have been an incredibly depressing way to end the season.

The delayed air date explains why, in this episode, Cray is noticeably shorter than he was in the previous episode, his voice is noticeably higher, and his hair is a lot longer.  In fact, the episode opens with Cray’s birthday party and Cray announcing that he is now a teenager and he’s ready to start dating.  Jane and Ben give Cray a lot of silly dating advice.  It’s dumb.  Maybe if Ben and Jane had done a better job, Cray wouldn’t have gotten caught up with that crazy marijuana girl.

Meanwhile, Karen gets a job as a waitress at the Warehouse and the kids are forced to finally appreciate everything that she does for them.  It took two seasons but Karen finally gets to call out all of her spoiled adoptive children.  Good for her!

Anyway, this was an episode that in no way felt appropriate for a season finale.  Regardless, season two is over!  Next week, we start the third and final season of One World.