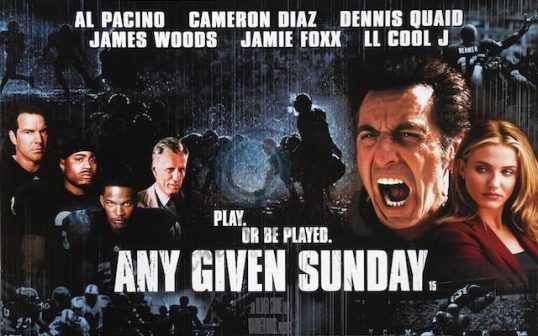 I once read an article where Al Pacino’s lock room speech in Oliver’s Stone 1999 football film, Any Given Sunday, was described as being the most inspirational locker room speech ever.

I don’t really know if I agree with that.

I mean, to be honest, Al Pacino’s Tony D’Amato kind of looks really beaten down in this scene.  It looks like, instead of spending the previous night studying game film and coming up with plays, the coach spent the previous night out drinking.  If I was one of his players, I would be wondering if the coach was hungover and I might reset that.  I might be like, “Hey, I’ve been staying off cocaine all week for this game and then coach shows up looking like he’s just killed Frank Lopez.  Someone get Aaron Eckhart in here — he’s the coach we need!”  Also, for the most part, his speech seems to be more about him than the team.  It’s like, “I’ve got failed marriages, I’ve got this, I’ve got that …. life is a game of inches!”  Well, that’s great, Tony, but how are we going to win the game?  “I got problems!”  Well, we’ve all got problems, coach!  I mean, he’s talking to a room full of people who probably can’t stand up without hearing a hundred different things going snap in their knees.

Do locker room speeches really make that much of a difference?  I’ve seen enough sports films that I often wondered this.  Is it a requirement that a coach give a speech?  If the coach refused to give a speech, the team would still be obligated to go out there and play hard, right?  As I’ve said many a time, I really don’t get the point of long speeches but some of that is because of the ADD.  There’s no way that I could listen to anyone talk about life being a game of inches for four minutes.  I would just zone out.

What if a coach filibustered and just kept going and going in his speech?  Would the team have to forfeit?

Would it have been more effective to show the team the Willie Beamon music video as opposed to forcing them to listen to a speech from hung over Tony D?  Well, probably not.  If I remember correctly, the team did win the big game and they did it even after Dennis Quaid got injured for like the 100th time.  So, I guess the speech did work.  That shows you everything I know about football.

Anyway, I know a lot of people love this speech.  I mean, there’s a reason why it showed up in that car commercial.  And, to be honest, it worked pretty well in that commercial.  Certainly, it made more sense to use Tony’s “life is a game of inches” speech as opposed to Robin Williams’s poetry speech from Dead Poets Society.  (Car commercials are weird.)  So, in honor of those people and Super Bowl Sunday, here is the Tony D’Amato Any Given Sunday locker room speech:

2 responses to “Scenes That People Love: The Al Pacino Locker Room Speech From Any Given Sunday”