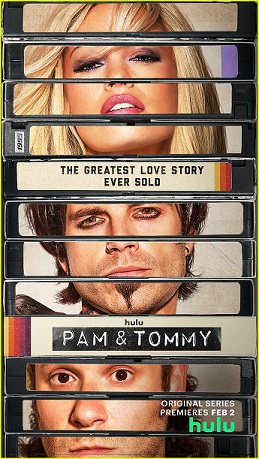 “I’ve made a terrible mistake.”

Instead, my concern came from the fact that, by reviewing the first three episodes, I had now committed myself to watching and reviewing the entire series.  And, the more I thought about it, the more I realized that there was no way that Pam & Tommy could remain interesting for a total of 8 hours, not unless the show abandoned its Ryan Murphy-lite approach and did something really unexpected with its recreation of the story.  There’s just not enough there.  This is a good 2-hour story but Pam & Tommy is an 8-epiosde miniseries.  That’s 8-plus hours of Pam getting upset, Tommy acting like a dumbass, and Rand being every creepy guy who has ever approached you in a bar and started asking you about the book you’re reading.  (It would, of course, never occur to him that the main reason you’re reading the book is to avoid talking to guys like him.)

Having now watched the fourth episode, it’s hard not to feel that I was very much correct in my concerns.  Don’t get me wrong.  The fourth episode had its moments.  It featured an enjoyably intense performance from Don Harvey as the legendary Hollywood private investigator, Anthony Pellicano.  Once Tommy finally discovers that his safe has been stolen and Pam reminds him about the videotape, Pellicano is the man who they approach to track down the perpetrator.  This leads to a scene of Pellicano beating the crap out of Rand and it’s fun to watch.  Some of that is because Don Harvey is a master of portraying urbane menace.  But I have to admit that a lot of it is because Rand himself is such an annoying character.  This episode opened with Seth Rogen, as Rand, wandering around a porn set and trying to reconnect with his estranged wife (Taylor Schilling), who significantly was just trying to read Anne Rice’s latest book when he approached her.  Just the sight of Rand, with his mullet and his sad-sack facial expression, was so annoying that it was actually cathartic to see him get tossed around his apartment.

The problem is that the show wants us to feel some sympathy for Rand but there’s nothing sympathetic about him.  He’s a loser and the fact that he still loves his wife and still wants to take care of her doesn’t make him any less of a loser.  He’s a thief, a guy who accidentally stole a sex tape and then decided to put it online.  The fact that he later feels guilty doesn’t change the fact that he did it.  There’s as scene in the fourth episode where Rand is upset to see someone else selling bootleg copies of the tape.  On the one hand, it’s not a bad scene.  There’s an enjoyable irony to Rand discovering that someone has essentially stolen the tape from him after Rand went through so much trouble to steal the tape from Tommy.  But the show doesn’t seem to be sure whether it wants us to laugh at Rand’s misfortune or to sympathize with him as he realizes that the consequences of his actions are out of his control.  As a character, Rand is not compelling enough for both to be an option.

As for the title characters, both Sebastian Stan and Lily James do their best but I get the feeling that we’ve already learned all the we need to know about them.  There was one good moment that examined Pam and Tommy’s different reactions to the release of the sex tape but otherwise, neither Tommy nor Pam are really that interesting as characters.  I ended the fourth hour of Pam & Tommy very much aware that there were still four more hours to go.  What else, I found myself wondering, could be left to be said?