Another week, another collection of television shows!  Here’s what I watched this week.  As you may notice, there’s not a lot.  This week turned out to be an unexpectedly busy one.  Perhaps next week I’ll finally be able to get caught up with everything.  Here’s hoping!

At this point, I’m not even sure that I remember why Herr Flick was chained up in that dungeon but the Resistance and a reluctant Rene got him out of there on this week’s episode.  Meanwhile, Officer Crabtree was still incapable of mastering the French language and the English airmen were still hiding in barrels and responding to everything by saying, “Jolly good show, old boy.”

Upon doing some research, I discovered this week’s episode was actually the first episode of the show’s 5th season.  Because there was apparently some interest from American broadcasters about perhaps bringing the show to the U.S. or doing an American version of it, the 5h season had 26 episodes and were designed so that commercial breaks could be inserted, just in case the show ever did appear on an American network.  As such, much of this week’s episode was designed to fill potentially new viewers in on who everyone was and how they were related to each other.  Needles to say, it was all a bit frantic but still funny.

Anyway, this week, Katie declared for the 100th time that she doesn’t have any interest in any drama and then she dramatically sent Hunter home.

I’ve watched every season of this show and I’ve achieved every writer’s dream of getting paid to write about and yet, it’s something that I rarely brag about.  You can read my current thoughts about the show and the live feeds over at Big Brother Blog.

I forgot to see the DVR to record the two episodes that aired on Monday morning.  It happens and since Dragnet wasn’t a serialized show, missing two episodes doesn’t make it any more or any less difficult to follow the rest of the series.

I did remember to set the DVR for the rest of the week, however.  Tuesday got started with an episode in which Friday and Gannon dealt with a teenage genius who had a rebellious and homicidal streak.  Despite getting a warning after throwing a beaker of acid at a jock, he later decided to hold an entire party hostage with a grenade!  Friday and Gannon agreed that it was all the fault of parents who don’t teach their kids to respect authority.  While it was easy to roll my eyes at some of the more didactic parts of the episode, it was interesting to see how this 1968 show foreshadowed many of the subsequent school shootings that would follow.  As well, the episode ended with a Spaghetti western-style stand-off between Gannon, Friday, and Grenade Boy, which was actually pretty well executed.  This was followed by an episode in which Friday shot and killed a man robbing a store and was subsequently subjected to an investigation by the police’s “shooting board.”  As with many early episodes of Dragnet, the emphasis was on the process.  As someone who has seen her share of cop shows, it’s weird to see something Dragnet where everyone brags about how they go “by the book.”  There’s no room for any renegades on this show!

Wednesday featured Friday and Gannon going undercover to catch a couple of hotel con artists who were pretending to be cops.  I love episodes where Friday and Gannon go undercover because it’s not like either one of them ever makes much of an effort to change their behavior or appearance.  They don’t take off or even loosen their ties.  They still sound, look like, talk like, and act like cops,  But, because all of the criminals in L.A. in 1968 were apparently really stupid, no one ever notices.  This was followed by an episode about a bank robber whose M.O. was to abduct innocent women and force them to help him carry out his crimes.  At the end of the episode, he attempted to abduct a karate instructor and Friday and Gannon pulled up just in time to see her kicking his ass.  Yay!

The first of Thursday’s episodes opened with Gannon telling Friday that “there’s a football game on the old tube,” and that Friday was welcome to come over and watch it.  Friday agreed but, once they arrived at Gannon’s place, it turned out that Gannon’s neighbors were just as annoying as any everyday criminal.  The main lesson here seemed to be that Friday and Gannon acted exactly the same off-duty as they did on-duty and that Friday was just as stiff and formal at home as in the office.  This was followed by an episode in which Friday and Gannon attempted to track down a sergeant who, as a result of burn-out and general depression, had developed a drinking problem.  Friday and Gannon help him see the errors of his way, largely by telling him to drop the self-pity act.

Finally, Friday started out with an episode in which Joe and Gannon arrested a veteran burglar named Charles Smith.  Charles Smith was a courtly senior citizen but he still had to go to jail.  He didn’t seem to mind, however.  It was all a part of the job.  The second episode featured Joe and Gannon fighting the evils of …. you guessed it …. MARIJUANA!  These are the type of episodes that Dragnet is known for, the episodes where a grim-faced Joe debated long-haired draft dodgers who thought smoking marijuana and otherwise breaking the law was no big deal.  And it’s true that this episode — called The Big High — had its share of campy moments.  Just hearing Joe explain that “dealers say smoking marijuana is like heaven but the users discover its Hell,” was enough to make me laugh out loud.  It was also hard not to laugh at the scene where a clueless, pot-loving suburbanite told Joe and Gannon that, “Once the young people cut their hair, put on a suit, and start voting, marijuana will be legal!,” just for Gannon to confidently reply, “I don’t think so.”  The show ended with that suburbanite’s toddler drowning in a bathtub because her stoned parents forgot about her, a scene that perhaps would have been more effective if not for the total overacting of the actor playing the stoned father.  It was all pretty melodramatic but, to be fair, it was also rather sincere.  As opposed to something like Reefer Madness, you got the feeling that Dragnet actually did believe in what it was saying, even if the show was totally clueless about the effects of drugs or the lifestyle of anyone under the age of 50.  The final shot, of Jack Webb’s Joe Friday crushing a baggie of weed in his hands was handled well, even if the show’s insistence on solely blaming marijuana seemed to kind of let the dumbass parents off the hook. 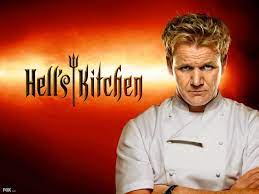 Poor Kevin!  As hard as he tried, he just couldn’t get it together during service and Chef Ramsay kicked him out of the kitchen and off the show before the final order was even served.  I imagine the same thing would happen to me if I was ever on Hell’s Kitchen.  I’d probably survive a few nights based on my charm but eventually, I’d get kicked out during the middle of an episode.  I would cry and cry, too.  It’s probably a good thing that I’ve never been on the show.

Elann had a drinking problem but then she faced an intervention and got help.  As the show came to an end, she talked about how much better she was feeling about life.  Then a title card appeared that informed us that, after getting sober, Elann still struggled with depressing and took her own life in 2019.  It was heart-breaking and a reminder that getting sober is important but it’s not a magic cure-all.

Elann’s episode was followed by one featuring Caitlin, who was addicted to crack cocaine. “Crack is my boyfriend,” she said.  This episode was hard for me to watch because I’ve known many people like Caitlin, who was obviously very intelligent but also very defensive and angry.  Unfortunately, Caitlin relapsed after getting treatment and, at the show’s end, was described as “living on the streets.”

On a special Halloween episode of Moone Boy, Martin and Padraic built a raft, which they planned to sail into town so that they could “freak everyone out.”  Needless to say, the river did not cooperate and they instead ended up on an island with a castle and an eccentric caretaker.  Meanwhile, Martin’s mother defended the right of her daughter to be a reader at Mass despite being pregnant and unmarried.  She also impressed the priest with her knowledge of Simon and Garfunkel trivia.  It was a good episode.

The Office (All The Time, Comedy Central)

On Tuesday night, I watched several episodes from season 6.  Admittedly, season 6 is not my favorite season, as it featured the terrible storyline where Jim was co-manager and a lot of nonsense about Sabre.  Season 6 was when The Office started to get noticeably cartoonish.  That said, a cartoonish Office is still better than a lot of other sitcoms out there and it was nice to rewatch Jim and Pam’s wedding. 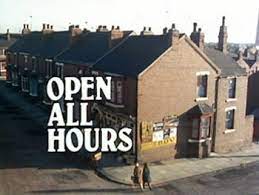 This week, I decided to pay attention the plot as opposed to just focusing on Granville’s quickly decaying sanity.  Apparently, Arkwright — a man in his 60s — had never seen his girlfriend’s bedroom and he decided that the best way to fix that would be to fake a burglary.  Granville went along with the plan, presumably because it was either do that or continue to fantasize about murdering the entire town.

I watched two episodes on Tuesday night, one of which featured Jerry indirectly getting Babu deported and the second of which was the classic Festivus episode.  I preferred the second episode.

Ever since I first started watching Upstart Crow, I wondered how this comedy would deal with the tragic death of Christopher Marlowe, who is portrayed on the show as being Shakespeare’s free-loading, hedonistic best friend.  This week, I discovered that handled it by having Marlowe fake his own death.  Yay!  Marlowe lives!  As well, as Kate pointed out, with Marlowe believed dead, that meant no one would ever try to promote any weird theories about Marlowe secretly writing all of Shakespeare’s plays.  If only Kate were right!

(Seriously, the Shakespeare-Didn’t-Write-His-Plays people are the worst.  And no, I don’t care what Derek Jacobi has to say on the matter.)

The other major development this week was that Shakespeare wrote out the outline for a play to be called Hamlet.  However, when he tried to explain the plot to his colleagues, they all assumed it was a comedy.  When they heard about Ophelia drowning in the duck pond, they asked Shakespeare if they could have a duck on stage.  Will was not amused.  And yet, as silly as this show is, it’s hard not to think that it probably does get more right than it gets wrong.  Shakespeare is such a mythic name that it’s easy to forget that he was once just a playwright trying to make a living off of his writing.  Every classic work of art started as a rough draft and was probably dismissed, out-of-hand, by people who should have known better.  Upstart Crow is a good reminder of that fact.