The Outpost, which is currently streaming on Netflix and which deserves far more attention than it’s been given, is a film that left me breathless.  Seriously, as the film came to its conclusion, I realized that I was so emotionally overwhelmed by what I had just seen that I actually had to stop for a few minutes and catch my breath.  Once I was breathing again, I started to cry.  I cried all the way through the end credits.  That’s the sign of a powerful film.

Based on a true story, The Outpost takes place in 2009.  PRT Kamdesh is an American military outpost in Northern Afghanistan.  The post is located in a valley.  The mountains, which rise high up into the sky, are not only beautiful but they also provide the perfect cover for the Taliban.  The outpost is attacked on a nearly daily basis.  At the start of the film, we’re told that one military strategist said that the base should have been named after George Custer because it was impossible to defend and that, should a big attack ever truly come, all 53 of the man on the base would essentially be sitting ducks.

The Outpost follows those 53 men as they go about their daily lives on the base.  Commanders die and are replaced.  The soldiers try to hold onto their sanity, even though they know that the “big attack” is inevitable.  Though more than a few of the men have families back home, they try not to think about them.  They can’t risk the distractions.  Even the act of adopting a dog is seen as being a potentially dangerous move.  The humor is dark, to the extent that the base’s theme song is “Everybody Dies.”  While dealing with daily attacks, the base’s commanders try to win the support of the local villagers.  One of the local elders asks if the Americans are the same invaders who have been in Afghanistan for the last 40 years.  “No,” the flummoxed commander tries to explain, “those were the Russians.”  It quickly becomes apparent that the soldiers and the villagers have at least one thing in common: no one is quite sure why the Americans are there or if they’ll ever able to leave.  Orders are sent down by faceless generals and the men of PRT Kamdesh wait for the attacks that they all know are coming,

When the attack does come, it leads to one of the most visceral battle scenes that I’ve ever seen.  There’s nothing glamorous about the way that The Outpost portrays war.  Instead, it’s a confusing, loud, and terrifying nightmare.  The Outpost establishes early on that anyone can die, an important lesson when you consider how many action movies have been made about heroes who are mythically impervious to even the slightest of injuries.

For roughly the final hour of the film, The Outpost puts us into the middle of the Battle of Kamdesh.  The film pays tribute to the soldiers who fought in the battle, showcasing their bravery and the quick thinking that kept the battle from being even more of a disaster than it was.  At the same time, it also reminds us that war is not fun and that the scars of combat are not just physical.  When a soldier breaks down into tears while trying to talk about the battle, the film treats his feelings with the respect that they deserve.  It’s been said that few people are as anti-war as the people who have actually experienced combat and The Outpost shows us why that is.

The Outpost is an important film.  It’s especially important now that we have a new president and the national media is probably going to go back to ignoring whatever happens in Afghanistan for at least the next four years.  For far too many people, it’s become the forgotten war, even though it’s still ongoing.  The Outpost is a film that reminds us that no war and no soldier should ever be forgotten.

I’ve been pretty critical of director Rod Lurie in the past but, with The Outpost, he’s given us one of the best films of 2020. 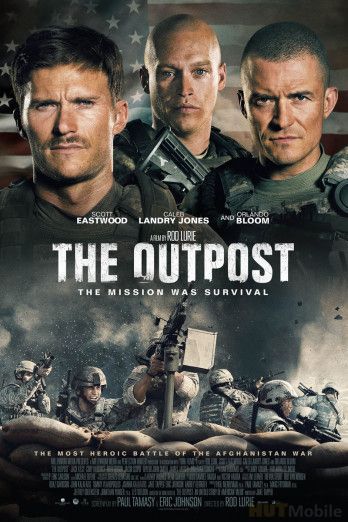