Patrick tried to warn me.

When I told him that I was planning on watching 1972 film, Santa and The Ice Cream Bunny, he warned me that it would totally change the way that I viewed Christmas and probably not for the better.  But, you know me.  When I get an idea in my head, I simply have to do it.

Despite all the warnings, I watched Santa and the Ice Creamy Bunny.  I made Jeff and my friends Johnny and Jim watch it with me.  Leonard nearly joined us but he was smart enough to think twice. Santa and the Ice Cream Bunny was like nothing that any of us had ever seen before.  We all just kind of watched it like, “What the Hell is happening?!”

The plot — well, who knows?  Apparently, Santa is stuck in Florida and he calls a bunch of kids to come help him out.  It turns out that the kids are pretty stupid so not only do they fail to rescue Santa but Santa also has to tell them a story to keep their spirits up.  The version that we watched featured the story of Jack and the Beanstalk.  Apparently, there’s another version that features Thumbelina.  Regardless, Santa was probably doing some pretty serious drugs when he came up with the story.

Eventually, a human-bunny hybrid shows up and helps Santa transport back to North Pole.  Christmas is saved! 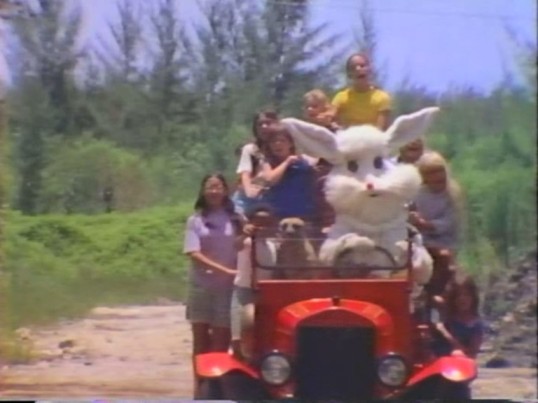 Interestingly enough, it’s never really explained how Santa came to be stuck in Florida in the first place.  Santa gives off a definite beach bum vibe and …. well, there’s a part of me that kind of doubts whether or not Santa was actually Santa Claus at all!  For all we know, he could just be some jerk with a sleigh and red suit.  That said, the Ice Cream Bunny was definitely for real.

As Patrick already pointed out in his review of the film, Santa and the Ice Cream Bunny is not a particularly good film but I do feel like it’s one that everyone should watch at least one.  It’s just so weird.  Plus, if you watch the version with Jack and the Beanstalk, you will totally get the giant’s theme song stuck in your head.

So, with all that in mind, please enjoy Santa and the Ice Cream Bunny!

2 responses to “Get Ready For Christmas With Santa and The Ice Cream Bunny!”