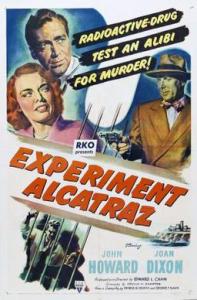 Dr. Ross Williams (John Howard) has a theory that injecting patients with a radioactive isotope can be used to treat a serious blood disease.  However, he needs people on which to test his theory and, since it involves radiation, volunteers aren’t exactly lining up.  Finally, five prisoners at Alcatraz agree to be used as test subjects in return for early parole.  The prisoners are whisked off to a military where Williams and nurse Joan McKenna (Joan Dixon) oversee the experiment.  Joan has her own reasons for hoping that Williams’s treatment is a success.  Her own brother is currently dying of the disease.

Unfortunately, things go terribly wrong when one of the convicts, Barry Morgan (Robert Shayne), grabs a pair of scissors and stabs another prisoner to death.  Morgan claims that he was driven mad by the treatment and, as a result, the experiments are canceled.  Both Joan and Dr. Williams are convinced that Morgan had another reason for killing the prisoner.  With Morgan and his cronies now free, Williams launches his own investigation into what happened.

Experiment Alcatraz starts out with an intriguing premise but then settles into being a typical B-crime film.  Robert Shayne does a good job playing the viscous criminal but Morgan’s motives for committing the murder turn out to be fairly predictable and the story’s conclusion won’t take anyone by surprise.  Howard and Dixon are competent leads but both are playing dull characters and too much of the film’s story depends on getting the audience to believe that a potentially revolutionary medical treatment would be tested in a thoroughly haphazard manner.  Worst of all, despite the title, there’s very little Alcatraz to be found in Experiment Alcatraz.  The prisoner leaves the prison early and never look back.

One response to “Experiment Alcatraz (1950, directed by Edward L. Cahn)”