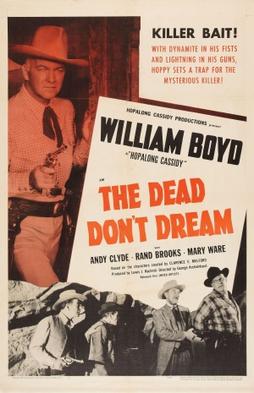 From 1935 to 1948, actor William Boyd played the role of upright, Sarsaparilla-drinking cowboy Hopalong Cassidy in over sixty films.  Though most of these films were standard western programmers, they were still better produced than the average B-western and, despite having never been one in real life, Boyd was considered to be one of the most believable cowboys on the silver screen.

All good things, however, must come to an end and, by 1944, the Hopalong Cassidy films were no longer bringing in the audiences that they once did.  After United Artists announced that they weren’t planning on producing any more Cassidy films,  William Boyd bought the rights to character from producer Harry Sherman and then proceeded to produce and distribute Cassidy’s final film adventures himself.  The Dead Don’t Dream was the 62nd Hopalong Cassidy and it was also one of the last.  Only four more films would follow it.

Though The Dead Don’t Dream is set in the old west and features Hoppy and his two usual sidekicks, Lucky (Rand Brooks) and California (Andy Clyde), it’s hardly a standard western.  Instead, it’s an Agatha Christie-style murder mystery, taking place in a western inn and even featuring William Boyd announcing, “The killer is in this room!”  Hoppy, Lucky, and California are in town for Lucky’s wedding but, when Lucky’s future father-in-law turns up dead, the wedding turns into a murder investigation.  Two other men disappear and are presumed to be dead and with everyone apparently dropping like flies, it’s up to Hoppy to solve the case, catch the killer, and prove that it’s neither him nor Lucky.  The only clue is that all of the men spent a night in the same room.

The Dead Don’t Dream is diverting programmer.  Though the low-budget means that there aren’t a lot of of suspects and the killer’s identity is pretty easy to figure out, Boyd does a good job playing detective and the method that was used to commit the murders is surprisingly inventive.  There’s a lot more talking the shooting in The Dead Don’t Dream, which might disappoint some western fans.  But personally, I enjoyed the film’s change-of-pace approach to the genre.  It was interesting to see old west heroes solving mysteries instead of just shooting bad guys,

Though Strange Gamble, the final Hopalong Cassidy film, was released just a few months after The Dead Don’t Dream, Boyd would keep the character alive on both the radio and television.  Boyd was considered to be the first western TV star and every western program that followed owed him an immeasurable debt.  After finally retiring from acting in 1954, Boyd went on to make millions in real estate before eventually dying, at the age of 77, in 1972.  For the rest of this life, he refused to do interviews or photographs, preferring the people always remember him as Hopalong Cassidy.


Well, that’s quite an adventure.