Horse Girl tells the story of a lost woman named Sarah (played, in a bravely committed performance, by Alison Brie).

Sarah is an introvert who works in a craft store, where she can tell the customers exactly the right type of paint to buy and where she’s watched over by her friendly co-worker, Joan (Molly Shannon).  During the day, she occasionally visits the grave of her mother, who committed suicide.  Sometimes, she might have a conversation with her wealthy stepfather (Paul Reiser).  She enjoys going out to the stables and watching a horse named Willow.  When she was a little girl, she rode Willow and she still thinks of him as being her horse.  The owners of the stable, however, are never particularly enthused to see Sarah hanging around.  In one scene, Sarah attempts to give advice to the girl who was just riding Willow, despite the fact that the girl obviously has no idea who Sarah is.  Despite her good intentions, Sarah tends to be so awkward in her attempts to socialize that she just leaves people feeling uncomfortable.

When she’s not at work or at the stables or trying to fit in with the other students at her zumba class, Sarah lives in an apartment with her roommate, Nikki (Debby Ryan).  While Nikki has a boyfriend, Sarah spends most of her nights in her living room, watching a cheesy sci-fi adventure show called Purgatory.  She knows every detail about the show and is always shocked when no one else is as interested in it as she is.

In short, Sarah is a misft but she’s a familiar misfit.  We all probably know someone like Sarah.  At the very least, we all follow someone on twitter who is like Sarah, someone who always seems to be trying to make a connection but who can never quite get comfortable enough to just relax and be herself.

Strange things start to happen to Sarah.  She hears voices in the apartment.  She has dreams in which she’s lying on the floor of what appears to be a spaceship.  Sarah starts to sleepwalk and is soon waking up to find herself in random locations.  When she sees a picture of her grandmother, she wonders if it’s possible that she’s a clone.  Strange scratches start to appear on the walls of her apartment.  Did Sarah put them there or are they result of something coming after her?

Horse Girl is a surprisingly effective film, one that keeps you guessing as to whether or not what we’re seeing is really happening or if it’s all just occurring in Sarah’s head.  Horse Girl was produced by Duplass Brothers Productions and it really does feel like a mumblecore version of Repulsion, with Alison Brie stepping into Catherine Deneuve’s role of the repressed young woman who finds herself a prisoner of her own fears.  Whereas Repulsion featured arms growing out of the walls, Horse Girl features alien abductions and clones.

It’s a film that is sometimes heart-breaking and occasionally darkly funny.  As much as we care and worry about Sarah, the people around her are interesting as well.  The world that Horse Girl creates feels very real and very familiar and even the actors in the smallest roles create an indelible impression.  This is one of those rare movies where it actually seems like the characters in the film all have a life even when they’re not in a scene.  Every performance and every character feels real and authentic.  I particularly liked the performance of Molly Shannon, who brings a very natural and sincere kindness to the role of Sarah’s co-worker.  Playing Sarah’s father and Sarah’s gently humorous doctor, Paul Reiser and David Paymer shine in small roles.

That said, the film works best as a showcase for Alison Brie, who is both sympathetic and, eventually, more than a little frightening in the role of Sarah.  Brie gives such an emotionally vulnerable performance as Sarah that there are times when you really wish that you could step into the film yourself and assure her that everything’s going to be okay.  It’s also a rather brave performance, one that wins our sympathy while also showing why the increasingly manic Sarah might be too much for some people to take.

I have to admit that I wasn’t necessarily expecting much when I started watching a film called Horse Girl but it turned out to be one of my favorite films of 2020 so far. 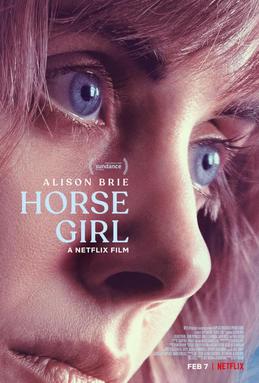