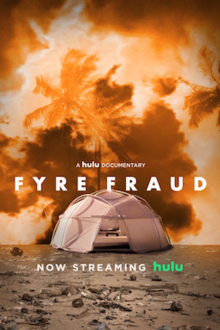 Yesterday, on Hulu, I watched Fyre Fraud, a 2019 documentary about the disaster that was the Fyre Festival.

With everything’s that going on in the world right now, it can be easy to forget just what a big deal the Fyre Festival was back in 2017.  The Fyre Festival was supposed to be the greatest party of 2017. Influencers played it up on Instagram. A commercial for it, one that featured the world’s top models on a beautiful island, was pretty much inescapable on social media. It was going to be the greatest musical festival of all time, with luxury villas and yachts and private chefs and …. Blink-182? Even before the entire festival was revealed to be a massive fraud, I have to admit that I was kind of like, “All this for Blink-182?”

The festival did turn out to be a disaster. A lot of people paid a lot of money to end up on the beach, staying in rain-soaked FEMA tents and eating pre-packaged sandwiches. The bands cancelled so there wasn’t even any music. After the festival was officially canceled, several people found themselves stranded on the island. Those of us who weren’t there followed the drama on twitter. We joked about the Lord of the of Flies. One of my favorite tweets about the whole mess compared it to an episode of It’s Always Sunny In Philadelphia. “The Gang Puts On A Music Festival.”

If those two paragraphs above seem familiar, that’s because I copy and pasted them from my review of FYRE: The Greatest Party That Never Happened.  The Fyre Festival was such a legendary disaster that it was the subject of not one but two documentaries, both of which were released within days of each other in 2019.  FYRE: The Greatest Party That Never Happened was released on Netflix while Fyre Fraud premiered on Hulu.

Both documentaries tell the same basic story, though each focuses on different aspects of the story.  For instance, FYRE: The Greatest Party That Never Happened featured several interviews with the people who actually lived and worked on the island where the festival was to take place and it revealed that the majority of them went unpaid for their hard work.  (I’ll always remember the restaurant owner who ended up feeding hundreds of stranded festival goers, all of whom had specifically been told not to bring money with them to the island.)  The Greatest Party That Never Happened went into detail about how the festival fell apart during the planning stages and how those involved in putting it on seemed to by fueled by a willful denial of reality.

Fyre Fraud, on the other hand, focuses on FOMO, the fear of missing out that left so many people vulnerable to a con man like the festival’s organizer, Billy McFarland.  Along with various “experts” discussing the power of social media influencers, Fyre Fraud features footage of the festival goers first arriving, via school bus, at the beach and seeing their FEMA tents.  (While most of the festival goers attempt to joke about how terrible the place looks, one woman loudly sobs in the background and begs the bus driver to turn around.)  Fyre Fraud also features an interview with Billy McFarland, in which McFarland says that he’s willing to answer any questions but then refusing to answer several questions and announcing that he needs to take a break.  If The Greatest Party That Never Happened made Billy McFarland look like a douchebag who overpromised and quickly got in over his head, Fyre Fraud makes him look like a con artist who is incapable of feeling guilt or understanding why so many people were angry with him.

Fyre Fraud never really digs as much into the story as you would want it to.  It’s pretty much a surface-level examination of the Fyre Festival, one that acknowledges the fear of missing out without really doing an in depth examination into way that fear is so strong for so many people.  Fortunately, though, the story of the Fyre Festival is so insane that it’s impossible to make a boring documentary about it.  This is one of those stories that just demands to be told and retold.