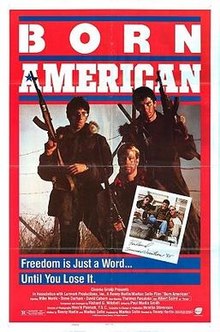 The year is 1986 and the Cold War is raging between the United States and the Soviet Union.  Three American college students are on vacation in Finland.  Mitch (Steve Durham) and Savoy (Mike Norris) think it would be a great idea to secretly cross the border into Russia and just hang out for a few hours.  The more cautious KC (David Coburn) thinks that would be a mistake but he’s outvoted.

Of course, it turns out that KC was correct.  No sooner have the three students crossed the border than they find themselves being chased by Soviet soldiers and getting accused of raping a woman in a nearby village.  When the three of them attempt to flee back over the border, they instead end up accidentally destroying the village instead.  Arrested by the Russians, KC is tortured by the KGB until Savoy agrees to confess to being an intelligence agent.

Sentenced to a prison camp in Siberia, Savoy and KC are forced to take part in forced labor while Mitch is used as a pawn in an underground human chess match where the pawns are all prisoners and capturing a pawn means that prisoner is then executed.  (I don’t get it either.)  After KC dies due to the abuse to which he’s been subjected, Savoy discovers that there’s a former American intelligence agent known as The Admiral (Thalmus Rasulala) living underneath the prison.  The Admiral is willing to help Savoy escape but he wants Savoy to help him by smuggling a book that The Admiral has written to publishers in the West.

What type of name is Savoy anyways?

Despite the name and the pro-American subject matter, Born American was produced in Finland.  At the time, it was the most expensive Finnish film ever made.  It was also the directorial debut of Renny Harlin and the surprise box office success of Born American led to Harlin getting offers from Hollywood.  If not for Born American, Renny Harlin would never have gotten the chance to direct Die Hard 2 or to marry Geena Davis.  Of course, he also wouldn’t have gotten the chance to direct Cutthroat Island.

The best thing about Born American are the action scenes.  They rarely make much sense in the context of the film’s plot but Renny Harlin proved that, even with his directorial debut, he knew how to film people blowing things up and shooting guns at each other.  The scenes in the prison camp are believably intense, or at least they are until The Admiral shows up in his well-furnished underground lair.

The worst thing about Born American is the plot, which never makes any sense.  I’m about as anti-communist as they come and even I still found it hard to have much sympathy for three obviously wealthy college students who were stupid enough to try to sneak into Russia just so they’d have a story to tell later.  Savoy is not much of a hero because almost all of his troubles could have been avoided by him not acing like an idiot.  Plus, what type of name is Savoy?

Originally, Savoy was to be played by Chuck Norris.  When Chuck withdrew from the project, the producers instead hired his son, Mike Norris, and rewrote the script to make the three Americans college students.  This was Mike Norris’s first starring role and, unfortunately, he’s not very good.  He’s believable as a tourist but once he’s taken prisoner and has to emote, he starts delivering all of his lines in a high-pitched whine and it becomes difficult to listen to him.  Watching Mike Norris in the role of Savoy Brown, I couldn’t help but think to myself that Chuck Norris never would have gotten captured in the first place.

One response to “Born American (1986, directed by Renny Harlin)”