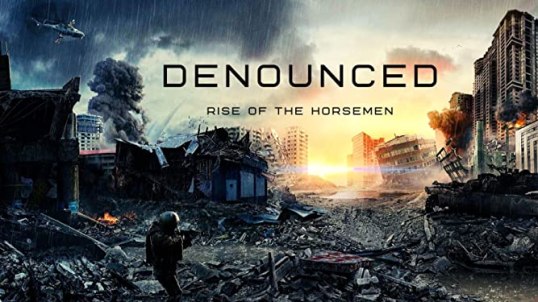 The 2017 film, Denounced, opens with a man named Paul (Sean Hart) in the wilderness.

Just one look at Paul is all you need to know that he’s seen some stuff.  He’s tall and physically imposing with a haunted stare and a scarred face.  He’s wearing a dark uniform, one that identifies him as being a member of some sort of paramilitary force.  Because Paul is now alone, it’s easy to guess that he must be a deserter of some sort.  But what did he desert and why?

Paul eventually meets two other people in the wilderness, a man and a woman.  They’re all trying to escape from something.  The man talks about how, on the night of an event that’s referred to as being “the vanishing,” he was on the verge of committing suicide.  The woman talks about how she was a drug addict. And finally, Paul starts to open up about his past life….

And, at this point, you’ve probably already guesses what this movie is about, haven’t you?  Yes, “the vanishing” was the Rapture and yes, Paul was a part of a paramilitary force that was working for the Antichrist.  Motivated by the anger of losing his entire family (they all vanished while he didn’t), Paul joined the Horsemen and spent months killing believers and other dissidents.  After finally coming to realize that he had surrendered himself to his hate, Paul refused to continue killing.  Now, Paul is hiding in the wilderness and obsessing on whether or not someone who has done the evil things that he’s done can ever truly be redeemed.

I know that at least a few of our readers are probably rolling their eyes already but Denounced is actually a surprisingly well-made film.  While the low-budget is evident in nearly every frame, director Stephen C. Bortsalas is still able to create a properly ominous and paranoid atmosphere throughout the film.  He gets a lot of help from Sean Hart, who comes across as being genuinely haunted in the lead role.  Including this film, Hart only has two credits on the imdb so I don’t know if he’s a trained actor or if he’s just a talented amateur but, in the role of Paul, he has the haunted eyes of someone who has lost everything that he once cared about.  He’s sympathetic in the present-day scenes and intimidating in the past scenes and you do hope for the best for his character.

Denounced is also a surprisingly brutal film, though every act of violence is justified by the film’s storyline.  One lengthy scene features more dismemberment than you would probably ever expect to see in a low-budget, faith-based film.  Heads and hands are graphically chopped off and it’s far more effective than I would have expected it to be.  So many films would have just had Paul say that he had done some terrible things and left it that.  This film shows you in details just what exactly those things were but it’s not gratuitous violence.  Instead, it’s very necessary to our understanding of who Paul is and why he’s now so haunted by his actions.

Though I imagine it will be best appreciated by people who already share its world-view, Denounced is a surprisingly effective apocalyptic film.

One response to “Film Review: Denounced: Rise of the Horsemen (dir by Stephen C. Bortsalas)”