I have a weakness for the old, all-star disaster movies of the 1970s.  It could be because those movies remind me of how fragile life really is and encourage me to make the most of every minute.  Or maybe it’s because I have my phobias and, by watching those movies, I can confront my fears without having to deal with a real-life tornado, hurricane, tidal wave, avalanche, or fire.

Or maybe I just have a weakness of glitz, glamour, and melodrama — especially when it involves a huge cast of stars and character actors.  Yes that’s probably the reason right there.

Case in point: the 1974 best picture nominee, The Towering Inferno.

As is the case with most of the classic disaster films, The Towering Inferno is a long and big movie but it has a very simple plot.  The world’s tallest building — known as the Glass Tower — has been built in San Francisco.  On the night of the grand opening, a fire breaks out, trapping all the rich and famous guests on the 135th floor.  Now, it’s up to the fire department to put out the fire while the trapped guests simply try to survive long enough to be rescued.  Some will live, some will die but one thing is certain — every member of the all-star cast will get at least 15 minutes of screen time and at least one chance to scream in the face of the film’s still effective special effects. 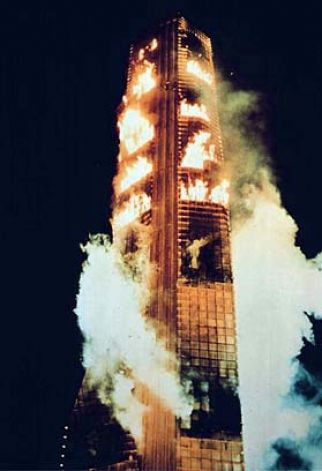 As for the people trapped by the towering inferno, we don’t really get to know them or their motivations.  (Add to that, once the fire breaks out, everyone pretty much only has one motivation and that’s to not die.)  As a result, we don’t so much react to them as characters as we do to personas of the actors who are playing them.

For instance, we know that Fire Chief O’Halloran is a fearless badass and a natural leader because he’s played by Steve McQueen.  McQueen brings a certain blue collar arrogance to this role and it’s a lot of fun to watch as he gets progressively more and more annoyed with the rich people that he’s been tasked with rescuing.

We know that architect Doug Roberts is a good guy because he’s played by Paul Newman.  Reportedly, Newman and McQueen were very competitive and, in this movie, we literally get to see them go-head-to-head.  And, as charismatic as Newman is, McQueen pretty much wins the movie.  That’s because there’s never a moment that O’Halloran isn’t in charge.  Doug, meanwhile, spends most of the movie begging everyone else in the tower to exercise the common sense necessary to not die.  (Unfortunately, despite the fact that he looks and sounds just like Paul Newman, nobody in the tower feels like listening to Doug.  If Towering Inferno proves anything, it’s that most people are too stupid to survive a disaster.)

The tower’s owner, James Duncan, is played by William Holden so we know that Duncan may be a ruthless businessman but that ultimately he’s one of the good guys.  Holden gets one of the best scenes in the film when, after being told that people in the building are catching on fire, he replies, “I think you’re overreacting.”

Roger Simmons is Duncan’s son-in-law and we know that he’s ultimately to blame for the fire because he’s played by Richard Chamberlain.  Roger might as well have a sign on his back that reads “Doomed.”  The same can be said of publicity executive Dan (Robert Wagner) and his girlfriend, Lorrie (Susan Flannery).

Faye Dunway is Susan.  She is Doug’s fiancée and she really doesn’t do much but she does get to wear a really pretty dress.  The same can be said of Susan Blakely, who plays Roger’s dissatisfied wife, and Jennifer Jones, who plays a recluse.  And good for them because if you’re going to be stuck in an inferno without much to do, you can at least take some comfort in looking good.

Then there’s Fred Astaire, who does not dance in this film.  Instead, he plays a kind-hearted con artist who ends up falling in love with Jennifer Jones.  Fred Astaire received his only Oscar nomination for his brief but likable performance in The Towering Inferno.

And finally, there’s the building’s head of security, Jernigan.  We know that he’s a murderer because he’s played by O.J. Simpson and … oh wait.  Jernigan is actually probably the second nicest guy in the whole film.  The only person nicer than Jernigan is Carlos, the bartender played by Gregory Sierra.

The real star of the film, of course, is the fire.  In the 40 years since The Towering Inferno was produced, there’s been a lot of advances in CGI and I imagine that if the film was made today, we’d be watching the fire in 3D and it would be so realistic that we’d probably feel the heat in the theater.  That said, the fire effects in The Towering Inferno are still pretty effective.  Now, I have to admit that I have a phobia (and frequent nightmares) about being trapped in a fire so, obviously, this is a film that’s specifically designed to work itself into my subconscious.  But that said, the scenes with various extras thrashing about in the flames are still difficult to watch.  There’s a scene where Robert Wagner and Susan Flannery find themselves trapped in a blazing reception area and it is pure nightmare fuel. 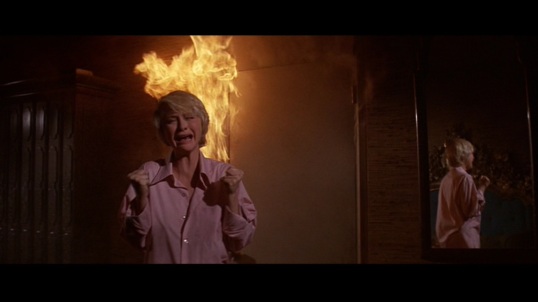 But it is definitely an entertaining one.

7 responses to “Embracing the Melodrama #28: The Towering Inferno (dir by John Guillermin)”