Probably the biggest star in King of Kings was Jeffrey Hunter, who played Jesus.  Hunter was in his 30s at the time but he still looked young enough that the film was nicknamed I Was A Teenage Jesus.  (Some of that also probably had to do with the fact that Nicholas Ray was best known for directing Rebel Without A Cause.)  But then again, for a man who had so many followers, Jesus was young.  He hadn’t even reached his 40th birthday before he was crucified.  As well, his followers were also young while his many opponents were representatives of the establishment and the old way of doing things.  It makes perfect sense that Jesus should be played by a young man and Hunter gives a good performance.  As opposed to so many of the other actors who have played Jesus in the movies, Jeffrey Hunter is credible as someone who could convince fishermen to throw down their nets and follow him.  He’s passionate without being fanatical and serious without being grim.  He’s a leader even before he performs his first miracle.

King of Kings is one of the better films that I’ve seen about the life of Jesus.  While remaining respectful of its subject, it also feels alive in the way that so many other biblical films don’t.  Perhaps not surprisingly, Nicholas Ray focuses on the idea of Jesus as a rebel against the establishment.  Ray emphasizes the casual cruelty of the Romans and their collaborators.  When John the Baptist (Robert Ryan) is arrested by Herod (Frank Thring), it’s not just so the filmmakers can have an excuse to work Salome (Brigid Bazlen) in the film.  It’s also to show what will happen to anyone who dares to challenge the establishment.  When Jesus visits John the Baptist in his cell, it’s a summit between two rebels who know that they’re both destined to die for the greater good.  When Pilate (Hurd Hatfield) makes his appearance, he’s smug and rather complacent in his power.  He’s not the quasi-sympathetic figure who appears in so many other biblical films.  Instead, he’s the epitome of establishment arrogance.

As a director, Nicholas Ray keeps things simple.  This isn’t Ben-Hur or The Ten Commandments.  The emphasis is not on grandeur.  Instead, the film is about common people trying to improve the world in which they’re living, while also preparing for the next.  Jeffrey Hunter gives an excellent performance as Jesus and, all in all, this is one of the better and more relatable biblical films out there. 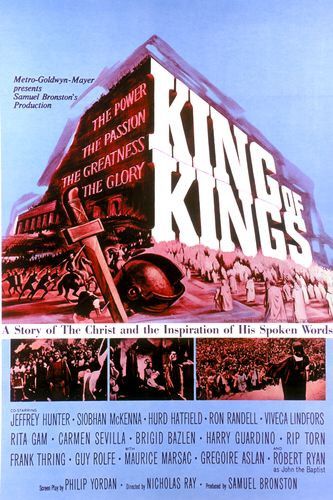 One response to “Film Review: King of Kings (dir by Nicholas Ray)”