Welcome, everyone, to the end of the world (again).  Today, the world ends in the 2013 film, New World Order: The End Has Come!

Demi (Melissa Farley) sits in a park, reading the Bible.  She’s reading the Book of Revelation or, as she calls it, “the scary one.”  As she gets in her car, she calls her friend, Christen (Erin Runbeck) and assures her not to worry.  “I don’t think we’re there yet.”  Then she puts the car in reverse and promptly runs over Jason (Daniel Spaulding).

Fear not!  Jason’s not injured and his career as an exotic dancer (I’m not kidding, it’s a plot point) is not damaged in the least.  In fact, Jason is so enchanted by Demi and her lack of driving skills that soon, they’re a couple!  And, fortunately, Jason has a single friend named Cedric (Will Roberts) so that means that Cirsten doesn’t have to be a third wheel whenever everyone goes out for the night.

Cristen and Demi may be good friends but we quickly discover that there are differences between the two of them.  Cristen doesn’t drink.  Demi gladly accepts a beer when Jason offers it.  Cristen likes to stay home and look after her younger brother.  Demi is all, “So, we’re going to that party, right?”  One thing that both of them do have in common is that, on Sunday morning, they giggle in church and check their messages instead of listening to the preacher.  I’m sure that won’t come back to haunt them….

Flash-forward by a few years or so and — oh no!  The world has totally changed!  Iran briefly conquered Europe and there was a huge war but, fortunately, a man named Aldo DeLuca, not only brokered peace but also come back to life after being shot in the head.  Some people think that Aldo didn’t really come back to life but instead, that his body was possessed by Satan.  Those people are threats to the New World Order and you can tell who they are because they’re the only people who refuse to get NWO tattooed on either their forehead or their hand….

“Wait a minute!” Demi says, as she thinks about everything that’s happened over the past year, “I’ve read this somewhere!”

That’s right, Demi.  You should have paid more attention to the Book of Revelations.  But you didn’t and now, everyone’s getting the mark except for you, Cristen, and a few others.  And, in order to eliminate people who refuse to get themark, the black-clad soldiers of the New World Order are now gunning people down in the streets while the brainwashed, soulless masses cheer.

The majority of this film is told in flashback, while Demi and Cristen are sitting in a prison area.  They’ve been given one final chance to either get the mark and live or to refuse and die.  Can you guess who sacrifices their soul and who willingly gives up their life?  In order to maitainn some suspense, I will not tell you who.  These are the things that I do for you.

Watching New World Order while on lockdown because of the Coronavirus was an interesting experience.  On the one hand, the film’s low budget is obvious in every frame and the acting is particularly amateurish.  (Just check out the scene where the Supreme Chancellor is greeted by a jubilant crowd of about 20 extras.) On the other hand, any movie about a totalitarian state using a crisis to come to power and destroy individual liberty is going to feel oddly compelling if you watch it while the country is literally shut down by government order.  I actually found myself falling under the film’s spell.  Normally, I’d make fun of the cartoonish NWO tattoos but instead, I found myself thinking, “What if they do decide to mark those of us who have been tested negative for Coronavirus in a different way from those who are sick?  And what if they do say that only people with the mark can enter a grocery store or see a movie?  And what if the mark eventually becomes a way of determining not who is healthy but instead of identifying people who never question the government?  What do we do then?”  I felt kind of silly after I wondered all that but …. well, not really.  I imagine that, right now, a lot of people are probably having reactions to films like this that they wouldn’t normally have.

Anyway, as a Christian scare film, New World Order will probably be best appreciated by scared Christians.  As a portrait of a society where people have sacrificed their freedom for a false sense of security, it feels like it could be dangerously prophetic. 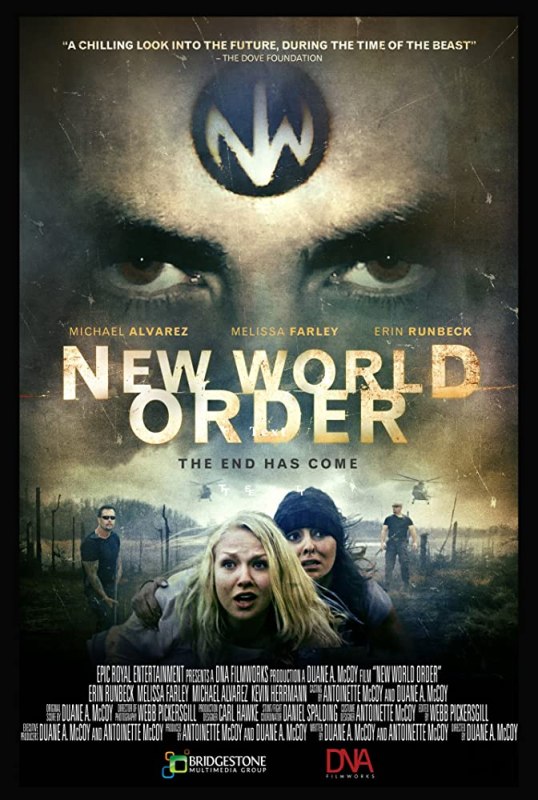 Other Entries In The 18 Days Of Paranoia: