Links From the Site:

Want to see what I accomplished last week?  Click here!

There’s a very clever scene at the beginning of The Christmas Contract.

Jack Friedman (Robert Buckley) is a writer who can’t get any of the big publishing houses to even take a look at his new book.  However, Jack’s agent informs him that they might change his mind if he does some ghostwriting.  One can see from Jack’s reaction that this is not the first time that he’s been asked to be a ghostwriter and it’s not something that he particularly enjoys.  Still, because one does have to eat, Jack agrees.

His agent tells him that he’ll be ghostwriting the latest installment in a very popular but critically dismissed series of romance novels.  He’s told to go read the previous book in the series and then to basically rewrite it, just changing a few details so that it can be advertised as a totally new book.  He’s given a list of plot points that the publishers want to be included in the book.  Again, it’s not particularly important how the plot points are integrated into the story.  Instead, they just have to be there.

Kisses under the stars?  Yep.

Oh, and the book needs to take place in Louisiana.

Now, you don’t have to be a part of the industry to realize that, in this scene, Jack is serving as a stand-in for every writer who has ever been assigned to write a Hallmark (or, let’s just be honest here, Lifetime) Christmas movie.  Don’t try to reinvent the season, just make sure that the basics are there.  Pick a new location and you’re ready to go!

With that scene, the makers of The Christmas Contract are acknowledging that, “yes, this is another Lifetime holiday movie.”  And yes, it’s going to remind you of a lot of other Lifetime holiday movies.  But, that still doesn’t mean that you can’t enjoy it.  After all, the appeal of a movie like this is to be found in its familiarity.  In an often chaotic world, there’s something to be said for the comfort of a good, if predictable, romance novel.  The same can be said of a Lifetime Christmas movie.

Anyway, it’s a good thing that the publishers want the book to be set in Louisiana because that’s where Jack spends his holiday.  He’s actually accompanying a recently single woman named Jodie (Hilarie Burton) back to her home for Christmas.  Because Jodie’s ex-boyfriend is going to be visiting with his new girlfriend, Jodie doesn’t want her family to know that she’s single.  So, Jack pretends to be her boyfriend.  They even sign a contract ahead of time.  And, yes, you can guess exactly what ends up happening but, again, that’s kind of the point with a movie like this.

The cast, which includes several veterans of One Tree Hill, does a good job with the material but the true star of this film is the state of Louisiana.  This film makes full use of the beautiful Louisiana landscape and the celebratory nature of the state’s culture.  It may have been predictable but it was still enjoyable.  Spending the holidays with Jodie, Jack, and the family looked like a lot of fun. 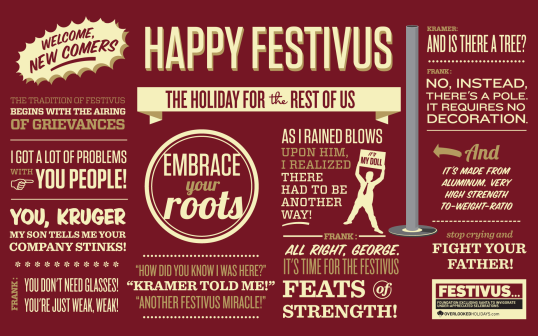 Today is a Festivus for the rest of us!

Traditionally, this is when I would start the airing of grievances but this is 2018 and I wouldn’t know where to start.  Instead, let us skip straight to the feats of strength and remember, Festivus is not over until you pin a loved one. 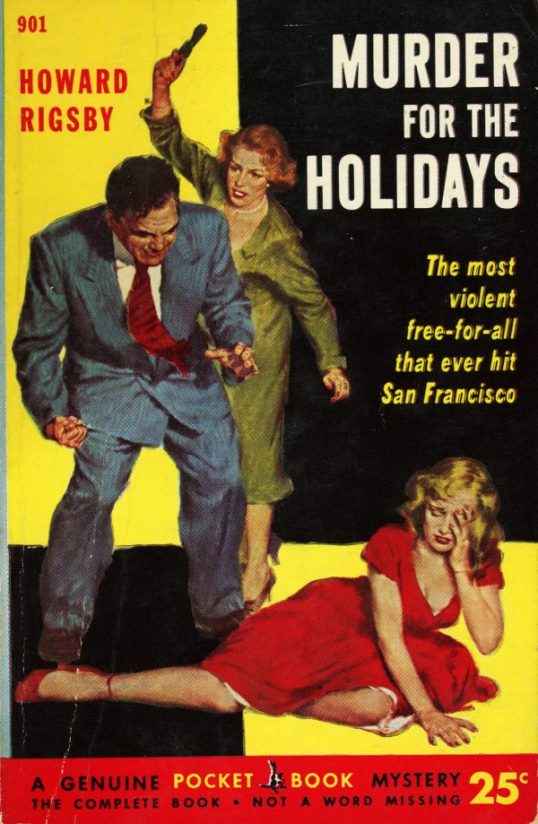 You’ve gotta hand it to Jeffrey Brown (who occasionally employs the curiously-bifurcated nom de plume of “Tsujigo+Ink”) — he’s one of the most infectiously enthusiastic cartoonists in the mini-comics scene these days. When I told him I was going to be focusing this week’s Round-Up column on his work, he ran off fresh copies of the four minis under review here and is anxiously awaiting orders from you, dear readers, so I heartily recommend you make the effort worth his while. Now it’s my job to tell you why —

Dinner With Izanami Grey Part One sets the tone — and the stage — for all that follows, introducing us to both Jeff’s title character, the hapless Ms. Grey, and his unique slant on traditional genre tropes, particularly in regards to what is commonly referred to as “body horror.” It’s a brisk read focusing on Izanami’s big night out with…


Darlene Love’s Christmas (Baby Please Come Home) is one of my favorite Christmas song but, unfortunately, there’s not an official music video for Love’s version.

However, there is a music video for Love’s 1992 Christmas song, All Alone on Christmas.  As you can tell from watching the video, this song was actually a part of the Home Alone 2 soundtrack.  The video is full of footage from the movie but it does not include the scenes with Donald Trump.  However, it does feature Macaulay Culkin “producing” the song.  I understand that the grown-up Culkin now performs song about pizza which …. well, I mean, I like pizza so hopefully it’s not as stupid as it sounds.

In the video, Darlene Love is backed up by members of the E Street Band, who all look happy to be freed (if only momentarily) from the tyranny of Bruce Springsteen.