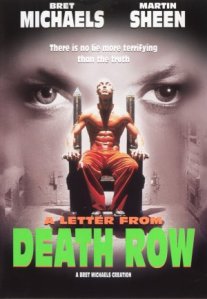 Songwriter Michael Raine (Bret Micheals) moved to Nashville from Philadelphia, searching for a new life.  Instead, he ended up convicted of murder and sentenced to death.  Michael says that he is innocent but the police have a video tape of him smothering his girlfriend with a pillow.  Michael says it was just a sex game.  He was in the bathroom, testing out his karate moves, when someone else broke into the house and smothered the victim for real.

In prison, Michael is interviewed by Jessica Foster (Lorelei Shellist), who says that she is working on a book that has nothing to do with her other job as chief adviser and mistress to the governor of Tennessee (Swan Burrus).  Meanwhile, another prisoner on death row, a former priest named, I’m not joking, Lucifer Powers (Drew Boes), claims that he has been framed by the governor and only Michael can help him get justice.

A Letter From Death Row not only starred Poison frontman Bret Michales but it was directed, produced, written, and scored by him as well.  If it sounds like a vanity project, it is.  It was also apparently a passion project.  Michaels had something important to say, though I doubt anyone could guess what it was from watching this movie.  Making a movie as incoherent as A Letter From Death Row requires real commitment.  Just check out the scene where the sadistic prison guards make Michael remove his false teeth before allowing him to speak to Jessica.  A less committed director would have cut this scene, just because it was unnecessary and did not add anything to the movie.  Not our Bret.  He knew it was important to show the world that he could act like a man with no teeth.

Like Michaels’s other film, No Code For Conduct, both Martin and Charlie (or Charles, as he insisted on being called at time) Sheen are giving co-star billing in A Letter From Death Row.  However, Martin is only on screen for 90 second and Charlie’s role as a police officer is literally a case of blink and you’ll miss him.  The rest of the cast was made up of local Tennessee actor and it shows in their frequently stiff performances.  Radio talk show host Phil Valentine is especially bad as Raine’s defense attorney.

I would not call A Letter From Death Row a good film but, even if it is for all the wrong reasons, it is still more interesting and watchable than No Code For Conduct.  As opposed to the blandly serviceable work that he did on No Code For Conduct, Bret Michaels embraced his pretentious inner film school grad for A Letter From Death Row.  Dutch angles, extreme closeups, black and white flashbacks (or are they flashforwards?), oversaturated color, and random slow motion are all used to tell this incredibly pointless story.  Michaels not only divides the movie into chapters (complete with titles like “The Famous Final Scene”) but also includes scenes of himself writing and reading the movie’s script.  Bret directs the Hell out of this movie and, if nothing else, the contrast between his ambition and the actual results makes the movie as watchable as the typical train wreck.

Though maybe not for the reasons intended, A Letter From Death Row ain’t nothin’ but a good time. 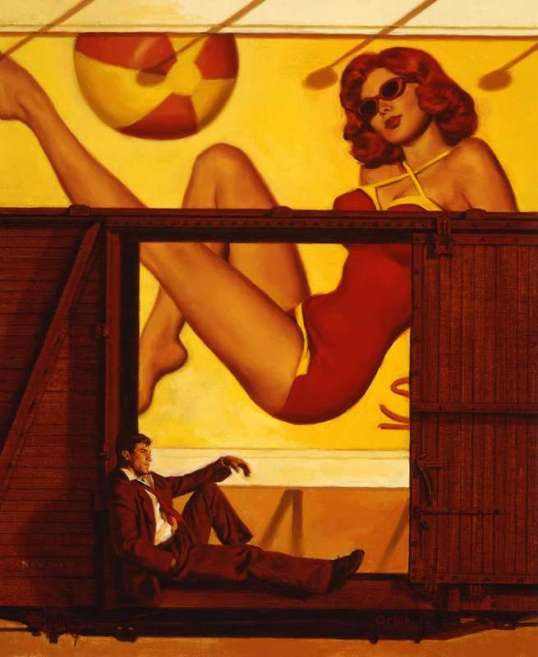 
I wasn’t kidding yesterday. Here is the music video where a band breaks into a data center to sing about games. To be more specific, they break into the then Control Data Corporation’s North Sydney center. Once inside, we see the games Speed Freak, Basketball, and Star Fire, along with code, a printout of the Mona Lisa, lots of paper, and tape storage.

I don’t think I’ve played any of the games. Although, while Star Fire looks familiar, I think I am confusing it for the Star Wars vector graphics game that a college near me had in its arcade when I did computer camp there one summer in the early 90s.

The band, Mi-Sex, is from New Zealand, and according to Wikipedia, started up just a year prior to this song. Aside from a history of the band, all I can find out about this song and video is that the song was a last-minute addition to the album, and what I already wrote above about the video.

There is one thing to mention about the band since it happened recently. On May 17th of this year, their guitarist and songwriter Kevin Stanton passed away.

If you want to take a trip back in time to late-70s computers and computer games, then this is the music video for you. It certainly makes me nostalgic. I also can’t get the song out of my head. It’s so catchy.