Billy Turner (Judd Nelson) has always been the bad boy but now he just wants to return to his Florida hometown and reconnect with his estranged father.  As soon as he rolls into town, Billy gets into a bar brawl and is arrested.  The chief of police (Paul Winfield) informs Billy that his father has been murdered and that his stepmother has since married the local gangster, Perry Kerch (Scott Wilson).  Everyone knows that Perry murdered Billy’s father but no one can prove it.  He is told to get out-of-town but Billy’s not going out like that.  Instead, he gets together with his childhood friends, gimpy legged Joey (David Caruso) and Annie (Ally Sheedy), and seeks his revenge. 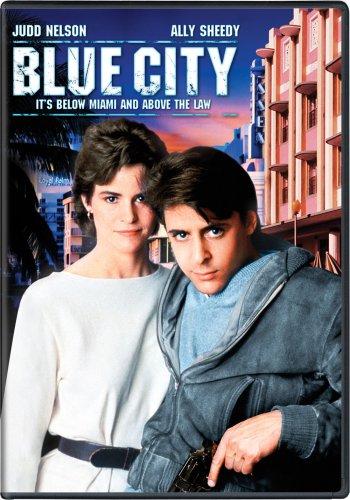 No, it’s not a picture of Judd Nelson hanging out with the a member of the Heaven’s Gate cult.  It’s the DVD cover for Blue City.

An infamous flop, Blue City was meant to show that the members of the infamous Brat Pack could play serious, adult roles.  Unfortunately, Blue City was released right at a time when everyone was starting to get sick of the Brat Pack.  (Even John Hughes had moved on, casting Matthew Broderick as Ferris Bueller, instead of Anthony Michael Hall.)  After countless magazine covers and the monster success of The Breakfast Club and St. Elmo’s Fire, a backlash was brewing and Blue City walked (or, in Joey’s case, limped) straight into it.

It also did not help the film’s prospects that it matched up the least interesting Brat Packer, Judd Nelson, with the member of the Brat Pack most likely to take herself too seriously, Ally Sheedy.  Playing roles that would have been played by Alan Ladd an Veronica Lake in the 40s, both Nelson and Sheedy are miscast and, strangely considering this was their third film together, have no chemistry.  Nelson, in particular, gives one of the most annoying performances in film history.  He never stops smirking, even when there is no reason for Billy Turner to be smirking.  With his wide-eyed stare and his attempts to speak like a tough guy, Nelson comes across like John Bender auditioning for West Side Story.  The scene where he manages to floor Tiny Lister with one punch is simply beyond belief.

When Judd Nelson can beat you up, there is only one thing left to do:

On a more positive note, David Caruso, long before he could usher in the Who by simply putting on his sunglasses, is better cast as Joey but there is nothing surprising about what eventually happens to him.  The best performance is from Scott Wilson, showing why he used to always play villains before reinventing himself as Herschel on The Walking Dead.  Wilson was so good that I realized, halfway through Blue City, that I actually would not have minded if he succeeded in killing Billy.

The most disappointing thing about Blue City is that it is a Florida noir from the 80s that somehow does not feature even a cameo appearance by Burt Reynolds.  Couldn’t Judd have taken just a few seconds during the filming of Shattered: If Your Kid’s On Drugs to convince Burt to drop by Blue City? 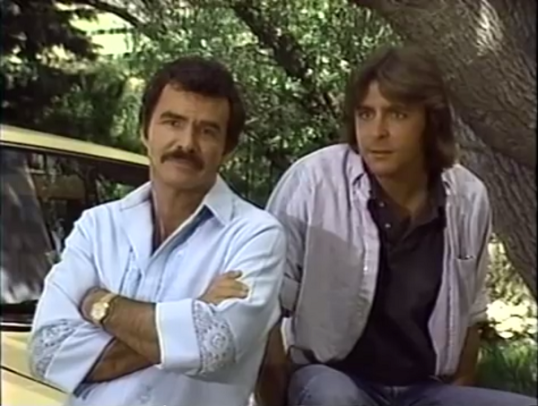 They could have used the help. 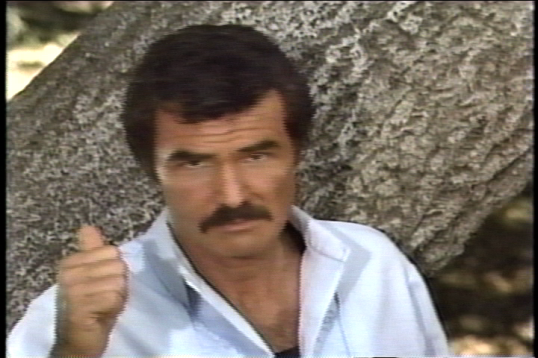 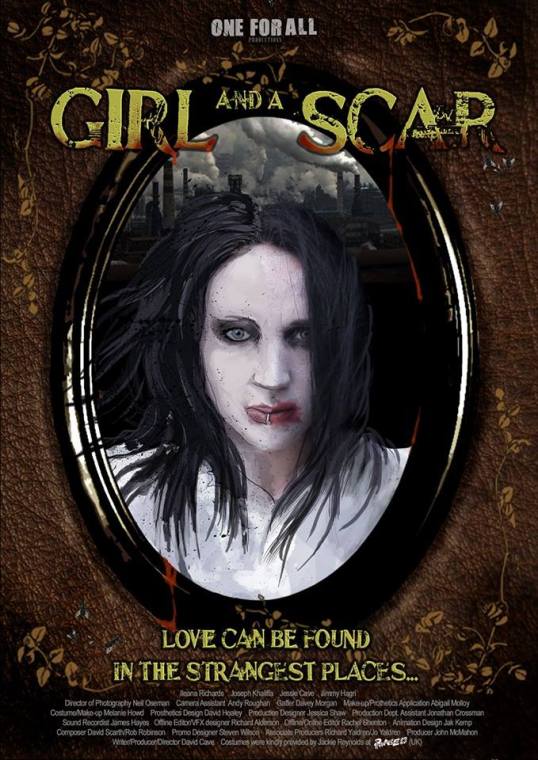 The short film format challenges both the filmmaker and the viewer.  For the filmmaker, the challenge is to take the audience on a full cinematic journey in a limited amount of time.  It’s one thing when you have two hours to tell a story, it’s something entirely different when you’ve only got 15 minutes.  As a result, the visuals and the acting become even more important.  You can’t have one wasted shot or one performance that feels out-of-place.  For the viewer (and the reviewer, for that matter), the challenge is to relearn how to watch a movie.  Short films force you to pay attention to every single detail because, often times, it’s only through catching those details that you’ll be able to understand what you’ve just seen.  In short films, there’s no time for the director or screenwriter to come back, take you by the hand, and say, “This is what it all means.”  Instead, it’s up to you to figure it out.  I love a challenge and that’s why I always appreciate and enjoy the chance to watch and review a short film.

For instance, I recently had a chance to watch Girl and a Scar, a 15-minute film from moviemaker David Cave.  It’s a challenging film, one that is full of surreal imagery and haunting atmosphere.  While the ever-present wind howls on the soundtrack, we find ourselves looking at an isolated house, one that would not be out-of-place in a Jean Rollin vampire film.  Inside the house, the Girl (Ileana Cardy) cuts herself with a razor blade.  Throughout the movie, the wound grows, almost as if it has a mind of its own.  We see the Girl outside, standing in front of what appears to be an industrial park and watching as a young man walks away from her and then as a man in a … well, I’m not going to spoil the details.  Let’s just say that she’s approached by a man in a very memorable costume.  In between the scenes of the Girl walking along the beach and stumbling through her isolated home, there are snippets of animation.  We see the girl in the forest, a cartoon that is occasionally eating and occasionally throwing up.  Connecting it all is the sound of that howling wind and that ever-growing wound on the Girl’s stomach.

The imagery is frequently shocking and disturbing and yet, because Cave does such a good job framing his images and maintaining the film’s atmosphere, the film is always watchable.  It helps that Ileana Cardy, though having no dialogue, gives a good and empathetic performance as the Girl.  You may not always understand what is happening to here but you want to understand and that’s the important thing.  From the minute it opens, Girl and a Scar invites you to investigate and try to solve its mysteries.  With the mix of body horror and animation, Girl and a Scar at times feels like a fairy tale told by David Cronenberg.

Short films are not necessarily easy to track down but I do recommend making the effort.  Hopefully, this one will soon start making the festival circuit. 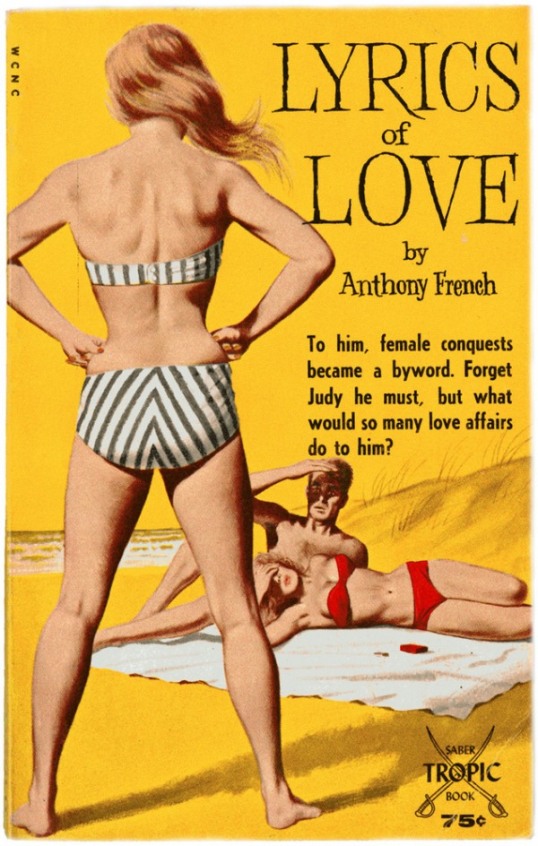 
I can’t believe it took till the 369th post to do a Girlschool music video. I would have gone with I’m The Leader Of The Gang, but…Gary Glitter and all. Plus, while that one may have a scorpion in it, this one has a random dog in the background. That, and since I did The Ballroom Blitz by Sweet for other reasons, I figured I’d do their version of Fox On The Run, and then do the Girlschool cover.

Girlschool is a second wave British heavy metal band that is all-female. If you aren’t familiar with them, but do know who Motörhead is, then they are along similar lines, but women. They are friends. They collaborated. They had a similar opinion towards music that wasn’t heavy metal. They did covers of songs that weren’t heavy metal. Sadly, they now share something else in common–both of their lead singers are no longer with us. Kelly Johnson passed away from cancer in 2007. Lemmy passed away from cancer, congestive heart failure, and cardiac arrhythmia in 2015. Assuming it is still up, you can see them perform Please Don’t Touch below as Headgirl on Top Of The Pops.

If you don’t know Motörhead, then you should, and Girlschool is heavy metal, but with leanings towards punk rock and new wave. I even remember hearing an interview one time where Girlschool referred to themselves as a new wave band even though they play heavy metal.

In 1988, when this video came out, Kelly Johnson wasn’t with the group as she is in the performance above. Rhythm guitarist Kim McAuliffe sings lead vocals. She is an original member of the band.

The video…well this video is exactly what it looks like. It’s Girlschool doing a version of that kind of music video that made Bon Jovi’s career, which I’ve seen credited to the video for Home Sweet Home by Mötley Crüe. It’s that mixture of the band onstage, but also behind-the-scenes stuff that frequently includes a tour bus. The difference between this and those videos, is that this one screams that the 80s are about to die, whereas Home Sweet Home and Livin’ On A Prayer don’t.

Edge Of A Broken Heart by Vixen ages a bit better because of the glam, but it also came out in 1988. You can tell it was starting to wear thin even if the quality of the music wasn’t. I’ll do Edge Of A Broken Heart soon because while I don’t know if they had any formal connections with Poison, the first thing that came to mind when I watched that video was Poison. Then just in case you didn’t think that, they have someone with a Poison jacket on in the video.

I’ll get to other Girlschool videos, like the one where they transform from cats into humans. It’s weird to look at that video if your first introduction to them is this video. Or you discover them in the late 2000s while in college, and the greatest hits album you buy has a cover with them in leather and denim looking like they are ready to kill the photographer if they don’t leave soon. That would be how I found them.

I’ll get to their covers of Tush and 20th Century Boy as well. Of course they covered T-Rex and ZZ Top. In the meantime, enjoy their take on Sweet’s Fox On The Run even if the video is nothing particularly special.

The video was directed by Jean Pellerin who did about 20 videos, and has done some feature films.

Bart Devaney was the executive producer.

Jean Richardson was the producer.

Sarah Bayliss was the production manager.

The one who seems to have the most credits is the runner, Bill Payn, who did that on at least 32 videos. He also did some 1st and 2nd assistant directing work on a couple of music videos. He appears to still be doing work in those areas–music and otherwise.