(Lisa recently discovered that she only has about 8 hours of space left on her DVR!  It turns out that she’s been recording movies from July and she just hasn’t gotten around to watching and reviewing them yet.  So, once again, Lisa is cleaning out her DVR!  She is going to try to watch and review 52 movies by Sunday, December 4th!  Will she make it?  Considering that she only has a day left, probably not.  But keep checking the site to find out!) 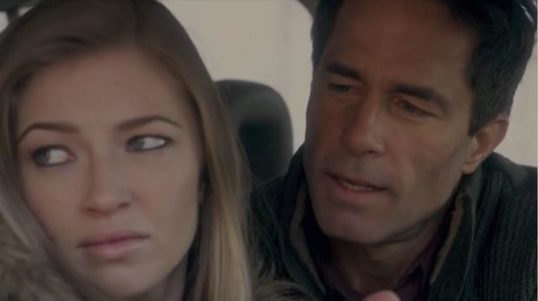 I recorded Hidden Truth off of the Lifetime Movie Network on September 18th.  It premiered before that on Lifetime and I even live tweeted it but I didn’t record it until it re-aired on LMN.  I’m glad that I did that because, as I rewatched Hidden Truth, I was surprised by how much I had forgotten about the film.

Hidden Truth is one of those Lifetime films that takes place in a small town where everyone knows each other.  It tells the story of a girl named Zoe (Diana Hopper) who is upset because 1) her father, Pace (Brendan McCarthy), may have killed her mother, 2) he’s now an alcoholic, and 3) she’s being raised by her loving but overprotective aunt, Jamie (Sarah Lind).  Zoe is desperate to get out of town so she starts having an affair with a local rich guy, Michael (Shawn Christian).  She wants his money.  He claims to be in love with her….

And then, one day, Zoe turns up dead and floating in the river.  The sheriff (Parker Stevenson) immediately suspects that Pace got drunk and killed his daughter.  Soon, Aunt Jamie is the only person in town who believes that her brother is innocent.  Can she clear his name?  Can she solve her niece’s murder?  Can she uncover the hidden truth…

Ironically, for the viewer, there’s nothing at all hidden about the truth in this movie.  The movie actually opens with Michael murdering Zoe and dumping her body in the river.  So, from the start, we know who the murderer is.  The film instead becomes about watching Michael try to cover his track and wondering when Jamie will finally figure out what happened.

It’s actually a different approach from what we’re used to with Lifetime but I have to admit that I have mixed feelings about it.  The problem is that Michael really isn’t that clever.  He’s a sloppy murderer and he’s sloppy when it comes to covering his tracks and there’s no moment when you think to yourself that he might get away with it.  And since Michael is a thoroughly despicable and inept character, it’s not like you find yourself conflicted as you watch him try to cover his tracks.  At no point do you think, “He’s a bad guy but I kinda hope he gets away with it.”

I guess what I’m saying is that the Hidden Truth would have worked better if the truth had remained hidden until the final five minutes of the film.  Still, you have to give the filmmakers some credit for trying to do something different.