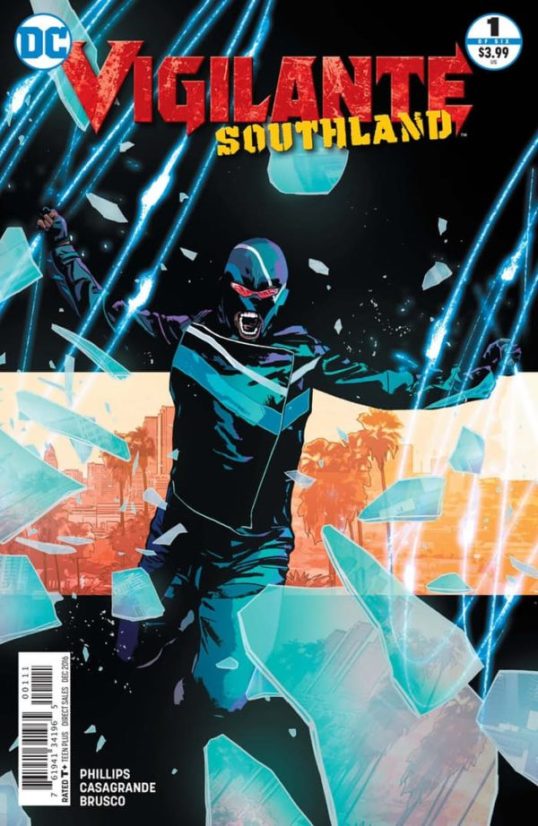 In the DC Universe, the name “Vigilante” doesn’t signify a specific character so much as it does a handle : sure, Batman, Nightwing, and the like are vigilantes by trade, but the first person to specifically call himself Vigilante was the country-singing “motorcycle cowboy” Greg Saunders all the way back in 1941, and arguably the most well-known costumed crimefighter who adopted the title was district attorney Adrian Chase, a creation of Marv Wolfman and George Perez who took on bad guys who got off the in the courtroom during his off-hours beginning in 1982 and ending, in a stellar moment of inspiration for youthful readers everywhere, with his suicide several years later. Now, though, there’s a new bolo-swinging masked adventurer who’s apparently cut from the Chase cloth : meet failed- NBA-draft-choice-turned-college-campus-maintenance-man Donny Fairchild, who’s making his debut in the pages of Vigilante : Southland #1 just in time for


I’ve tried to stay out of this election as much as I can. However, I am aware that it is happening, so I might as well take the opportunity to knockoff a few political related music videos.

This one speaks for itself, and of course it was redone recently as the Clintons singing it about Trump.

I can find an okay amount of information on it. There’s the whole controversy over whether Denis Leary steals material from people like Louis CK and/or Bill Hicks. I can find that it was #37 on MuchMusic’s “50 Most Controversial Videos Of All Time.” I can find that it samples Dolly Parton’s song Old Flame (Can’t Hold A Candle to You). I can find all sorts of information about where it has been used over the years. But, I can’t find out the crew on this music video. However, at the last second, I did stumble upon a couple of interesting things in two copies of Billboard magazine–one of which pertains to the release date.

The reason I wanted to know about the date was to figure out if it came out before or after the release of Heart-Shaped Box, that according to mvdbase was put out in September of 1993. In the process, I found something else worth mentioning. According to a March 26, 1994 Billboard magazine, director Kevin Kerslake filed a complaint against Kurt Cobain saying “that most of the visuals in the bizarre video were culled from treatments he submitted to Cobain.” I think my retrospective of director Anton Corbijn’s work on my post for that music video kind of says otherwise since I found almost all the same stuff in music videos Corbijn had been doing since 1983. It doesn’t say which parts, but apparently he didn’t name Corbijn in the complaint, so maybe it was something else that I missed. It does get interesting when you look at the music video Kerslake did for Midlife Crisis by Faith No More. That’s enough of that though.

One of the most famous bits from the music video for Heart-Shaped Box is when Cobain appears to deck Novoselic. If you watch Asshole, then you’ll notice his bassist hits Leary, and later we see Leary do the same to him. I know that early in Leary’s career he made commercials for MTV making fun of the alternative rock scene. Was he specifically making fun of Heart-Shaped Box? I figured he was at first since that whole black-and-white sequence is a reference to alt-rock music videos–complete with an ‘X’ on the drums. Then I found a Billboard magazine from May 8, 1993 that lists Asshole as already being in circulation as a music video on a network called The Box. Maybe that is from somewhere else that I am not aware of at the moment. Either way, it definitely looks like this came out before Heart-Shaped Box.

I wish there was more I could find, but that’s it. Enjoy!