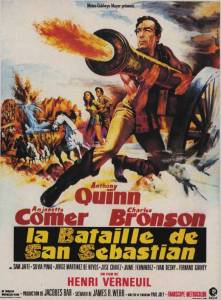 Leon Alastray (Anthony Quinn) is an outlaw in 18th century Mexico who is given sanctuary and hidden from the Spanish authorities by a kindly priest, Father Joseph (Sam Jaffe).  In return, Leon agrees to escort the priest to a peasant village that is under siege from the Yaqui Indians.  During the journey, Joseph dies and when Leon arrives at the village, he is mistaken for the priest.  Even though Leon’s an atheist and a womanizer, he pretends to be a man of God and tries to broker a peace with the Yaqui’s bloodthirsty leader, Golden Lance (Jaime Fernandez).  Standing in the way is Teclo (Charles Bronson), a mestizo rebel who wants to keep the Spanish and the Yaqui at war.

Guns For San Sebastian is an above average western that starts out slow but gets better as it approaches the exciting final battle between the villagers and Yaqui.  Morricone provides another great and rousing score but the main reason to watch Guns For San Sebastian is to see Anthony Quinn and Charles Bronson, two legendary tough guys, acting opposite each other and competing to see who can be the most intimidating.  In the movie, Quinn may win but you can still see the determined presence that led to Bronson becoming an unlikely movie star in the 70s. 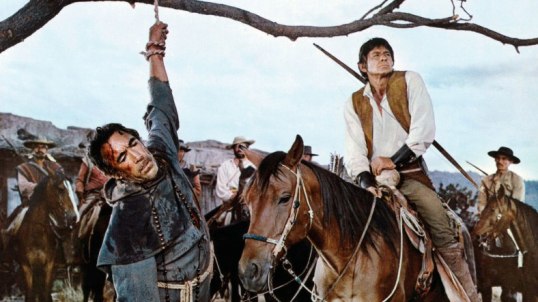 James Cooper (John Ireland) is a non-violent bank robber in the old west.  He wants to hold up one last bank and then retire to his farm with his wife (Gloria Milland) and daughter (Nadia Marconi).  However, he is double-crossed by his partner, Moxon (Mirko Ellis), who kills everyone who works at the bank and tries to steal the money for himself.  After Cooper throws Moxon over the side of a cliff and hides the loot, he is approached by Miguel (Antonio Sabato, Sr.), a young artist who had just deposited his money moments before the bank was robbed.  Miguel explains that he’s been saving up for a future exhibition in New York and he convinces Cooper to give him back his money.

Cooper is soon arrested and, because he was seen talking to the robber, Miguel is accused of being his accomplice.  In jail, Miguel helps Cooper to fight off the other inmates.  When it becomes obvious that Miguel was innocent, he is released.  He promises Cooper that he will check in on Cooper’s family.

Years later, dying of malaria, Cooper escapes from prison and discovers that his family is missing and Miguel seems to be working for Moxon, who survived going over the side of that cliff and is still looking for the loot.

Co-written by Bruno Corbucci (the brother of Django director Sergio Corbucci), Hate For Hate is a by-the-numbers spaghetti western that does not ever match the grandeur of the work of Sergios Leone or Corbucci.  It had a troubled production, with the original director being replaced by a former assistant to Pasolini and the film’s tone changes halfway through, going from being a light-hearted adventure to being a grim and fatalistic story of a dying man seeking revenge.  There are a few good scenes, like when Miguel holds off a group of outlaws by fooling them into believing that he has an army with him.  For spaghetti western fans, the most interesting thing about Hate For Hate is that it was the first excursion into the genre for both John Ireland and Antonio Sabato.

Two days ago, Paramount released five very short but rather intriguing teasers for Ghost in The Shell!  And here they are! 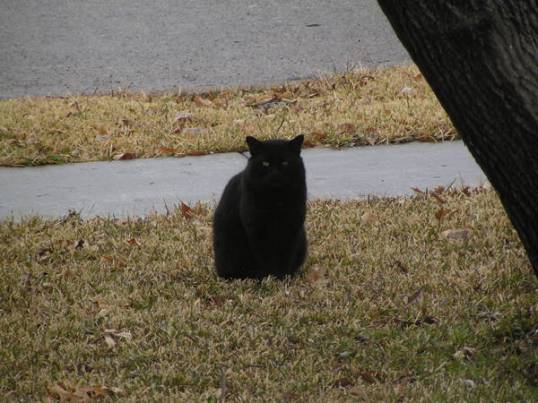 Here’s some of the trailers that have come out over the past two weeks!  Sadly, none of those trailers involve kitties!  Meh!

They’re back!  And this time, Ana’s in charge.

The good news is that a flame-haired one, Jessica Chastain, is in this film.  The bad new is that the script for this film was on last year’s Black List.  The Black List is supposed to be a list of the best unmade scripts in Hollywood so why do Black List films almost always end up sucking?

I thought this movie had to be about kitties but instead, it’s about Jake Gyllenhall and Amy Adams!  But the trailer still looks really good and supposedly this movie is going to win all sorts of Oscars!

The scary doll is back!

This looks like a great role for Rebecca Hall but will probably be too depressing for humans!  Meh!

The Eyes of My Mother

Some people are saying this movie led to the upcoming divorce of Brad Pitt and Angelina Jolie!  The flame-haired one says she’s Team Jolie all the way.  Meh!

Chris Pratt and Jennifer Lawrence in the same movie!?  And it’s from the director of The Imitation Game.  Some people say that this is going to be a big Oscar contender!  I think it needs more kitties. 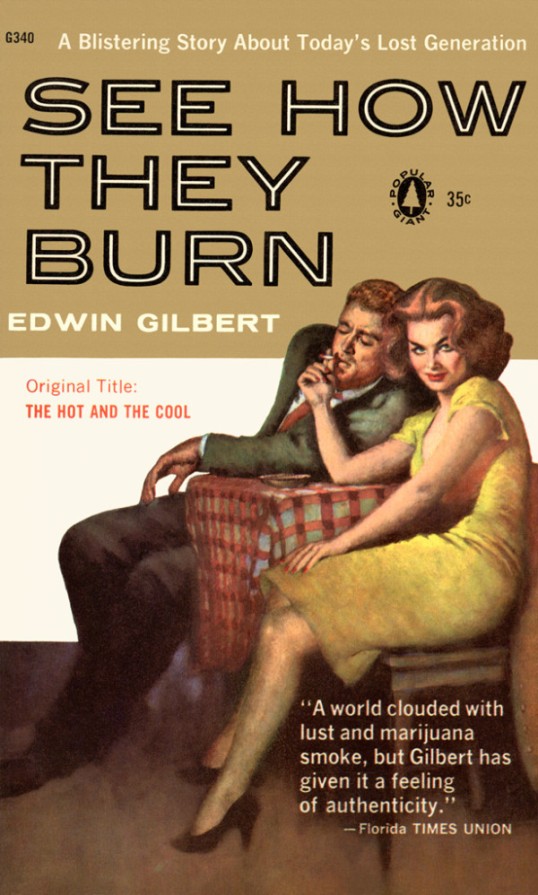 
Well, you might think this came out after A Nightmare On Elm Street (1984), but you’d be wrong. That movie came out in November and appears to have had an early limited release in October of 1984 while this music video premiered in March of that year. If you didn’t know that, then you probably would lump this in with all the other films that were inspired by that movie. It even comes complete with a bathtub sequence. When I was younger this was just that other early computer graphics music video that goes along with Money For Nothing by Dire Straits, but never seemed to get as much play on MTV. That’s probably because The Cars didn’t explicitly mention MTV in the song. The music video actually has less in common with horror movies of its’ era, and relies on classic monster movies such as The Fly (1958), King Kong (1933), and Robot Monster (1953).

This was pretty ambitious for the time, coming in with a budget of $80,000, which according to Wikipedia was about three times as much as was spent on music videos of the time. It also did quite well that year at the VMAs, getting nominated for six awards. It won the first VMA for Video of the Year. It also won awards from Billboard and the Videotape Production Association’s Monitor Awards.

What is amazing to me is how many credits I found attached to this music video.

The obvious one is the girl. That’s Susan Gallagher. I love how her IMDb bio mentions all kinds of things like where she trained to act, that she was cast in commercials, was on the TV Show Safe Harbor, worked for The Home Shopping Network, etc. No mention that she just happened to be the star of one of the most well-known, revolutionary, and heralded music videos of the 1980s. You might think that would be something you would want in your biography seeing as it instantly disambiguates her from just any old actor for a large number of people. Even her “other works” section only mentions that she was a National Guest Spokesperson for Dirt Devil Products. She seems to have largely dropped out of acting till the 2010s. She appeared in I Killed My BFF (2015) on Lifetime and has even gotten into directing recently.

Robin Sloane was the creative director on the music video. She worked/works for Elektra Records. I can only find one more credit for her in mvdbase, but based on IMDb, I am betting she worked as a creative director and producer on more than just Violet for Hole and One for Metallica.

Sloane came onboard after director Jeff Stein showed her some visual effects work that was being done by the company Charlex. He’s worked on around 40 music videos including some other well-known ones such as Don’t Come Around Here No More for Tom Petty & The Heartbreakers and the hilarious Cherry Pie for Warrant.

The music video was also directed by two of the founders of Charlex: Alex Weil and Charlie Levi.

Alex Weil seems to have only worked on one music video, but apparently was a pioneer in the video medium in general. I was able to find two of his short films on YouTube.

I was able to find a few more credits for Charlie Levi. He wrote and directed the movie Childless (2008). I even found an interview with him about the movie.

If that interview is to be believed, then he worked on more music videos than just this one.

There appears to be some disagreement between sources, but I think we can just assume that Jeff Stein, Alex Weil, and Charlie Levi all produced the music video.

Danny Ducovny shot the music video. I can find only a few credits for him, but one of them happens to working as an “additional photographer” on the film Tough Guys Don’t Dance (1987). I’m going to just assume that he shot the infamous scene from that movie. It makes me happy any time I can post it.

Yes, he also happens to be David Duchovny’s older brother despite the slightly different spellings of their last names.

Danny Rosenberg was one of the editors. I couldn’t find many other film credits, but he appears to have worked on two movies in the Wee Sing series. However, I do know what he does today thanks to his LinkedIn profile. He is now “Lord Protector/Chief Engineer” at Meta/DMA. According to their own website, they “write the code that makes the whole world sing.” This guy just can’t get away from working in things that sing one way or another.

The other editor was Bill Weber. There are a lot of Bill Weber’s on IMDb, but I am pretty sure that number III and V are him seeing as they both feature a bunch of LGBTIQ films along with working with Grateful Dead back in the 1980s.

Kevin Jones worked as the Lighting Director. Seeing as IMDb seems to have more Kevin Jones’ than they know what to do with, I have no idea what other credits he may have after this music video.

Bob Ryzner was the Art Director. I can’t find anything on him.

The only other credit I could find is for the company Charlex themselves who appear to have worked on the music video for Jealous by Beyoncé. I’m willing to bet there are many more, much like I completely believe that Robin Sloane was involved in more music videos as well.

That’s it! Enjoy this trip back to the early days of both music videos and computer animation going mainstream.