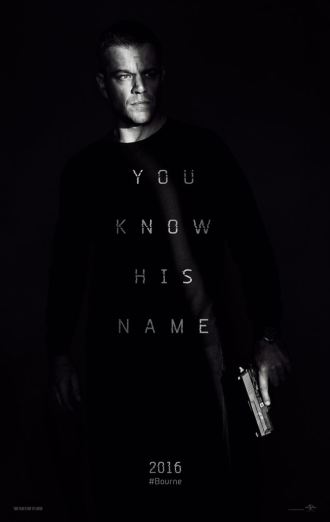 I most certainly do know his name. It’s John Rambo. I kept thinking of that fake ad for a Rambo style movie from Grand Theft Auto: Vice City throughout the film.

Take the beginning of Rambo III (1988), and make it the whole movie. That being tracking him down to bring him in, so he can be sent out on a mission. Throw in that surveillance thing from the TV Show Person of Interest. Add a little of the 60 Minutes fueled paranoia about technology that filled the movie Blackhat (2015). Copy the ending of Terminator: Genisys (2015), but make it about swapping out love interests to reboot the franchise. Make sure to shake the camera a bunch, put in unnecessary zooms, and editing that at times gets so frantic you lose track of what is happening. Endless action must be there too since people paid to see spectacle rather than just setup. That’s Jason Bourne in a nutshell. It is a film cobbled together from elements you are already familiar with from other films, you get some action for your money, and then are sequel baited before the credits roll.

Don’t see it in theaters like I did. If you are a big movie lover or an action junkie, then check it out on DVD. If you aren’t, then don’t watch it in any form whatsoever. It’s not worth it for the casual viewer.

That’s my short review, which I know I can’t be the only one who likes to read about a film that is brand new.

Now if you want to hear more about the film, then read on. I will do my best without physical access to the film, or proper screenshots. I refuse to use promotional ones. I want to be able to show you goofs like making an IP Address be internal by being 192 at the start, but still making the second number 256 for no reason at all. They won’t show that kind of thing in promo material. I will also spoil the ending that really isn’t a spoiler. You already know simply by the fact that there are clearly planned sequels that can’t exist without Bourne.

First, I have to confess that I did not see the last entry in the series. I have seen all the ones before that, but not the Jeremy Renner one. I doubt it makes any difference, but I thought you should know.

The movie starts off the way Casino Royale (2006) does by giving us a recap of Bourne’s previous kills. Just like Bond, it means he is in, and isn’t going to get back out again. That’s when it cuts to him fighting in an organized fight club type thing a la Rambo to get away from it all. At the same time, we are introduced to the two main people who will be chasing after Bourne. That’s Heather Lee played by Alicia Vikander and the director of the CIA played by Tommy Lee Jones.

Bourne is in Greece, which is in turmoil. They get hot his trail very quickly courtesy of Julia Stiles who makes a return, so she can lead Lee to Bourne before making sure she gets shot and killed. No joke. She hacks her way into a system they are monitoring to find Bourne herself, they catch on, they catch up, and she gets shot. There’s your setup for the movie. Bourne is drawn back into things whether he likes it or not while he is being hunted.

The next important thing isn’t really important at all, but will take up time in the movie nonetheless. It’s Tommy Lee Jones harassing a tech giant that he apparently gave money to so that he could start his company. He wants him to put in a backdoor in his very popular social network so that the CIA can spy on everyone. Yes, they do bring up Snowden because of course they do. This part of the story exists in the movie, but honestly plays very little into things except to give a purpose for drawing Bourne into something good rather than simply being the super solider who came in from the cold. It’s how Lee and Tommy Lee Jones handle the situation that tells Bourne where he stands, and sets up the sequel.

At a certain point the action takes over the film completely. Yes, there is quite a bit of fast-paced tracking sequences early on, but by the time the real action starts, you get to see a SWAT van act like a snow plow going down the street knocking cars left and right. I went with two friends, and neither of them could stop talking about the action. Things like “how did they do that” kept coming up. Obviously it’s a mix of practical effects and CGI, but there is just so much of it filled with quick cuts that you are overwhelmed as they were. It made me long for something simple like The Dark Knight (2008). However, I want to make it clear that I never lost a sense of space. That’s a deathblow to action sequences. It’s when the film isn’t shot properly so that instead of understanding the space in which the action takes place and the relation between the characters, you wind up with a bunch of disconnected actions scenes. I never felt that way watching this movie.

In the end, the tech giant is nearly assassinated, but rescued, and only gets shot in the chest. Tommy Lee Jones is killed off in a scene that reminded me of when RoboCop confronted Ronny Cox. Heather Lee is now situated as a go-between Bourne and the people who want to use him. They barely scratch at those special behind the scenes people with some flashbacks and a few documents. I figure that is what we will get a more fleshed out version of in the follow-up films.

That’s my longer review. Bourne walks away not telling Lee how she will get in touch with him. She does get into her car, and picks up some sort of device, but I honestly don’t recall what it was. The point is, she is both the new point-man, and probably a love interest down the road.

If that sounds like something you want to see, then more power to you!