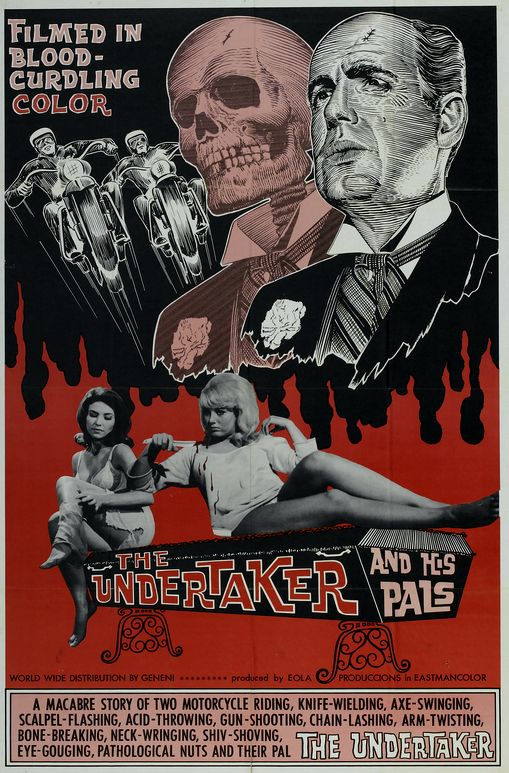 Say what you will about the overall quality of the 1966 horror-comedy, The Undertaker And His Pals, it has an absolutely brilliant opening shot.  One man on a motorcycle drives around in a circle in a parking lot.  He’s wearing a leather jacket and his features are hidden underneath a white helmet.  Soon, another man wearing a leather jacket and white helmet rides up on another motorcycle.  And again, they circle the parking lot.  And then, they’re joined by a third identically dressed man on yet another motorcycle and the three of them circle the parking lot before then driving off into the city.  The night is dark, the city streets are otherwise deserted, and the entire scene is tinted an otherworldly yellow.  It’s a truly creepy scene and, for those first few moments of the film, those three faceless riders are truly frightening.  If you ever watch The Undertaker and His Pals, be sure to appreciate that opening scene because nothing else in the film matches it.

It turns out that our three motorcycle riders are up to no good.  Two of them own a restaurant and, because they’re too cheap to actually order fresh meat, they kill people and serve them up as the special of the day.  The third one is the local undertaker.  Business has apparently been struggling so he’s started killing people so that he can get paid to provide them a funeral.  Apparently, half of each corpse is turned into lunch meat while the other half is put in a cheap, wooden casket at Shady Rest Funeral Parlor.

Now, here’s what makes The Undertaker and His Pal such a strange movie.  The murders are graphic and gory (and I imagine they were quite extreme for 1966) but the rest of the movie is an over-the-top comedy, full of bad puns and slapstick.  At the start of the film, while the latest victim is being stabbed to death, the camera continually cuts to a photograph of her sailor boyfriend, looking more and more upset with each cut.  Later, the undertaker accidentally steps on a skateboard and we watch as he uncontrollably careens into the middle of the street while everyone else in the film points and laughs.  When the undertaker finally falls off the skateboard, we even hear a waa waa on the soundtrack.  After the undertaker has his accident, the owner of the diner accidentally insults a customer and literally gets a custard pie thrown in his face.  (And again, we hear that waa waa.)

And then there’s the names!  The film’s first victim is named Sally Lamb.  The next day, the special at the diner is literally “Leg of Lamb.”  When an administrative assistant named Ann Poultry complains about the poor quality of her leg of lamb and threatens to call the health department, the next day’s special is “Breast of Chicken.”

Ann worked for and was dating a detective named Harry Glass (James Westmoreland, appearing here under the name Rad Fulton).  After her death, Harry is … well, Harry really doesn’t seem to care.  Harry is the film’s nominal hero but he really doesn’t do anything.  In fact, he is remarkably stupid.  Though he claims that he’s trying to solve his girlfriend’s murder, he seems to spend most of his time unknowingly eating her down at the diner.

The Undertaker and His Pals is weird and yet strangely watchable.  Of course, it helps that the film is only 66 minutes long and that the acting so cartoonish (and, I think, intentionally so) that it’s impossible to take the movie seriously.  (If the film was, in any way, believable, it would be almost unbearably grim and misogynistic.)  Fortunately, the film ends with clips of the entire cast coming back to life and laughing, letting us know that no one was intentionally harmed or traumatized and apparently, everyone had a great time making The Undertaker and His Pals.

I imagine the film was made to capitalize on the success of Herschell Gordon Lewis’s similarly over the top Blood Feast.  Ultimately, The Undertaker and His Pals works best as a weird time capsule of what was shocking in 1966.

One response to “The Daily Grindhouse: The Undertaker and His Pals (dir by T.L.P. Swicegood)”