That was my main reaction to watching The Stranger, a film from Chile that, for some reason, is set in Canada.  (There’s absolutely nothing about the film that brings to mind Canada.  The film was obviously shot in South America and almost all of the actors are Chilean.  And, just in case you forget, they’ve all been badly dubbed.)  The Stranger is full of atmosphere and it does attempt to do something new with the vampire genre so I guess we should give it some credit for that…

Listen, I love horror movies.  I think that some of the most interesting films being made today are coming out of the South American film scene.  And, in the past, I’ve even defended Eli Roth, who is credited as being one of the producers on this film.  But I’m sorry — The Stranger is an incredibly boring and unpleasant film.

And yes, I fully realize that the best horror films are meant to be nightmarish and, as a result, somewhat unpleasant to watch.  However, there’s a difference between the stylized violence of a good giallo and the relentless sadism of The Stranger.  There’s no real point or style to the overbearing violence and gore in The Stranger and, as a result, it gets pretty boring after just a few minutes.

Of course, another huge difference between good horror and The Stranger is that The Stranger takes itself way too seriously.  Again to return to the Italian horror comparison, the best giallo films always featured quirky characters, clever dialogue, and plot twists that took us by surprise.  They were exercises in pure style that celebrated cinematic excess.  The Stranger is so somber and grim and serious that it all becomes a bit tedious to deal with.

Also, an innocent black cat is brutally murdered about 30 minutes into a film.  Then, towards the end of the film a dog is similarly attacked and left to die in the desert.  And you really don’t get the feeling that there was any reason for these scenes, beyond the fact that the director needed to keep up with his onscreen death quota..  If you’re going to portray an innocent animal being killed by your hero, at least make sure it’s absolutely necessary to the plot.  Otherwise, it just comes across as pointless sadism.

Anyway, the movie itself is about a stranger (Christobal Tapia Montt), who shows up in what we’re told in a small Canadian town.  He’s looking for his runaway wife, who he discovers has subsequently died.  The man has secrets of his own, of course.  He hates the sunlight.  He apparently cannot be killed by ordinary methods.  His blood can heal others but it also tends to transform them into being blood-thirsty monsters.  Yes, the man is obviously a vampire but the film never comes out and admits that.

There’s all sorts of small town intrigue going on but I’m not going to talk about it because it was tedious enough just trying to watch it.  Ultimately, the whole film is basically just a collection of scenes of people threatening the stranger, the stranger looking somber, and then people threatening each other.  None of the actors are particularly memorable and very few of them speak in their own voices.  One gets the feeling that the Chilean cast could not sound properly Canadian and so a bunch of American actors were hired to overdub everyone’s dialogue.  (I say American because I heard many regional American accents but not a single Canadian one.  All of this again makes you wonder why this film was set in Canada as opposed to some place like maybe Chile.)  The dubbing is atrocious, with the voices rarely matching either the facial expressions or the body language of the original actors.

This movie is a total mess.  Sorry, Eli.  I still think that the Hostel films have a lot more to say about America’s place in the world than most people are willing to admit but ultimately, The Stranger is a disappointment.

With the 4th of July approaching, today’s artist profile is of a painter who celebrates the American pastime.  Born in 1980, Graig Kreindler was educated at both the School of Visual Arts in New York City and at Lehman College.  His award-winning paintings celebrate and recreate the history of baseball and have appeared in juried shows and museums nationwide.  You can see much more of his work at his site. 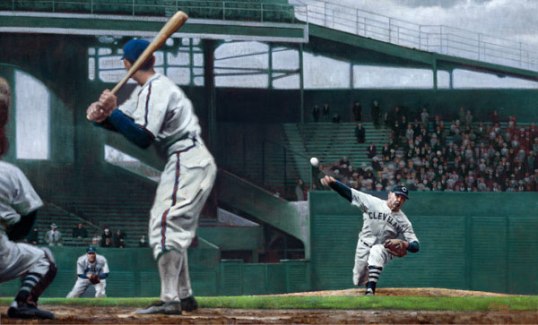 I was never a big fan of kaiju eiga movies. I watched them as a 60s Monster Kid in good standing, but much preferred the Universal classics, Technicolor Hammer horrors, and AIP/Poe epics. Those badly dubbed, fake looking Toho flicks just weren’t my cup of gruel.

I was however a fan of Nick Adams. The actor had roles in major films of the late 50s (REBEL WITHOUT A CAUSE, PICNIC, NO TIME FOR SERGEANTS) and scored big as Johnny Yuma in TV’s THE REBEL (1959-1961). He was nominated for a Best Supporting Actor Oscar for 1963’s TWILIGHT OF HONOR. Yet a scant two years later, Adams found himself in Japan appearing in low budget nonsense like FRANKENSTEIN CONQUORS THE WORLD and MONSTER ZERO.

MONSTER ZERO begins with astronauts Glenn and Fuji landing on the newly discovered Planet X, just beyond Jupiter. A race known as the Xilians are being attacked by Monster Zero, their name for the fearsome Ghidrah. The Xilian Controller has a plan to import Godzilla and Rodan from Earth to combat  the three-headed beast. In exchange, the Xilians promise to give Earth a miracle drug that will “cure all diseases”!

Glenn and Fuji relay the message to Earth’s Supreme Counsel, who begin searching for the two monsters. Suddenly, three spaceships rise up from the lake which supposedly contains Godzilla. The Controller tells the Earthlings they’ve come in peace to help capture the monsters. They snatch up the creatures in their “nuclear bubbles” (or something) and invite Glenn, Fuji, and their boss to Planet X to observe.

Meanwhile, Fuji’s future brother-in-law, Terry, has invented a sonic disruptor devise. This draws the interest of some Xilian spies hiding on Earth, including Glenn’s girlfriend, Namikawa. The aliens capture Terry and hold him in their secret hideout.

Godzilla and Rodan are set on Ghidrah, and a mighty battle ensues. Well, as mighty as these things get. Ghidrah is sent packing, and the Xilians give our heroes a tape containing the formula for the wonder drug. When the Earthmen return, it’s discovered the tape is actually the voice of The Controller stating Earth must immediately surrender and become a Xilian colony or they’ll wipe us out. Those dirty rats!!

The monsters are brought back to Earth under the control of Xilian magnectic waves (or something) and begin doing their rampaging destruction thing, which consists of crushing a bunch of miniature sets. Glenn and Terry manage to escape the aliens clutches, and the Army uses his sonic distrupter to combat the fiends. The world’s citizens are told to crank up their radios, and the piercing noise causes the Xilians computers to malfunction. The alien spaceships blow up in mid-air! The three behemoths are freed from Xilian control, and Godzilla and Rodan vanquish Ghidrah, bringing peace back to our planet.

MONSTER ZERO is pretty bad as far as these things go. I know there are plenty of kaiju eiga who will vehemently disagree, but to me the movie’s just plain Xilly. Toho Studios had success with this one though, and continued to crank out more rubber suited epics well into the 80s.

As for Nick Adams, his life and career continued on a downward spiral. An ugly divorce, with rumors of infidelity and domestic violence, ruined is reputation. Adams found work only in TV guest shots and Grade-Z dreck like MISSION MARS and FEVER HEAT. Adams died of a drug overdose in 1968 at the age of 36. MONSTER ZERO wasn’t released in the US until 1970, as a double feature with WAR OF THE GARGANTUAS, featuring another American ex-pat, Russ Tamblyn. A sad ending for a once promising actor