Just my thoughts for PTV you can use.

You all remember what happened in early May, right? All the broadcast networks presented their shiney new shows for advertisers, in something called the ‘upfronts’. They gave us their schedules, what will be airing when….*record scratch* Wait, What? Only four weeks later every thing has changed!

At the up fronts, ABC had “Of Kings and Prophets” airing in their 10 pm East/ 9 Central Sunday time-slot-of-death. (Remember 1600 Pennsylvania Avenue, The Gates, American Crime, Revenge? Yeah, me neither) But according to TVline, ABC has pulled “Of Kings and Prophets” for a re-cast, which, in my opinion, will mean a never air. (http://tvline.com/2015/06/02/abc-fall-schedule-quantico-sunday-replaces-kings-and-prophets//) Now “Quantico” which has had its own problems will move into the Sunday time-slot-of-death was originally scheduled to be Tuesday at 10 East/ 9 Central

Well, we were all looking forward to Melissa Georges’ heart wrenching “Heartbreakers” (sorry for the pun!) But NBC has decided to move up another Dick Wolf show in “Chicago Med.” (Okay, seriously! I am moving to Chicago and getting me a job in the PD, FD or Med field!) I digress, NBC has replaced “Heartbreakers” with “Chicago Med” on Tuesday nights, either show will get a significance bump from “The Voice” lead in. (http://deadline.com/2015/06/heartbreaker-pushed-melissa-george-pregnant-chicago-med-fall-launch-nbc-1201438347/)

For FOX and CBS, let’s give them credit! So far they have stuck with their schedules. For now…all schedules are subject to change!

In get your streaming news together:

Orange Is The New Black got released a bit early; not like the orange jump suit prisoners in New York! According to Variety and other sources, you can get out of jail early, or at least watch #OITNB early!

Okay, I might be a lot excited about this show! But in fairness to me, I loved Heroes! But in the news, according to TVLine (http://tvline.com/2015/06/10/heroes-reborn-cast-cristine-rose-returning-angela-petrelli/) Cristine Rose will be reprising her role as Angela Petrelli. and I could not be happier.

Yes, yes, YES! Not only will Vincent D’ be back, but according to CNN and other reports, (http://www.cnn.com/2015/06/09/entertainment/punisher-daredevil-walking-dead-jon-bernthal-feat/) Jon Bernthal (The Walking Dead
) will join the cast! Ok, I might be a little excited about Shane and his killing prowess!

In Memoriam this week.

I hope I do not have to do this often!

Lisa paid an amazing tribute to one of the all time greats, Christopher Lee this week! So saddened by his passing! (https://unobtainium13.com/2015/06/12/christopher-lee-r-i-p/)

But let’s not forget Ron Moody, can Fagin ever be played again the way Ron did? (https://www.youtube.com/watch?v=xWlHquk8si4) His interpretation of Fagin always leaves me breathless! Not what Charles Dickens did, but what Ron did with Fagin! How he transformed a character!

And Ornette Coleman
The only thing I can say about this amazing man is what he said about himself…”I don’t want to get paid, I just want to get heard, that is why I am broke”!

And I will be back next week with another news round up!

I have such mixed feelings about the 2008 film Revolutionary Road.

As you may remember, Revolutionary Road got a lot of attention because it reunited the Titanic lovers, Kate Winslet and Leonardo DiCaprio.  In Revolutionary Road, they would be playing the type of married couple that we all know Jack and Rose would have become if the boat hadn’t hit that iceberg.

Revolutionary Road also got a lot of attention because it was directed by Sam Mendes and it was a return to the “suburbs-as-Hell” genre of filmmaking that won Mendes an undeserved Oscar for his work on American Beauty.

With all that in mind, a lot of critics expected that Revolutionary Road would be one of the best films of the year.  When the film itself was finally released, there were a few ecstatic reviews.  There were predictions of Oscar glory.  But, for the most part, both audiences and critics had a somewhat muted reaction.  The film itself simply did not live up to all of the build up.

That said, Kate Winslet gave a great performance.  In the role of aspiring actress-turned-housewife-turned-prisoner April, Winslet gives a fierce and tragic performance.  The film revolves around April’s struggle to live her own life and pursue her own ambitions in a world that continually tells her that she should simply be happy and content to have a husband, two children, and a house in the suburbs.  When April describes her life as being full of “hopeless emptiness,” we all know exactly what she’s talking about.

Leonardo DiCaprio was a bit less convincing as her husband, Frank.  Then again, that’s not really a surprise.  DiCaprio is always at his worse whenever he has to play a “normal” character.  His screen presence is too off-center for him to be believable as a suburban conformist.  It was obviously good publicity to reunite DiCaprio and Winslet but that doesn’t change the fact that Leo is totally miscast.  Whenever Frank and April fight, Kate Winslet seems to be screaming from her very soul while DiCaprio is just shrill.  Admittedly, Frank is meant to be a shallow character but that doesn’t justify a shallow performance.

Throughout the film, Frank and April are constantly nagged by their real estate agent, Helen Givings (Kathy Bates).  Whenever Helen drops by the house, she goes “Yoo hoo!” in the shrillest way possible and the audiences is reminded that Sam Mendes is not a particularly subtle director.  That willingness to go over-the-top made him the perfect director for Skyfall but, in both American Beauty and this film, it just leads to some talented actors giving very bad performances.

Helen’s son, John (Michael Shannon), has one of those cinematic mental illnesses, the type that gives him the power to explicitly state each scene’s subtext.  John is also one of those overly theatrical characters who works a lot better as a literary conceit than as an actual character.

And really, I guess that sums up why I have never liked Revolutionary Road as much as I wanted to.  The film works whenever it focuses on Kate Winslet, precisely because she gives such a heartfelt and naturalistic performance.  However, at the same time, Winslet is so good that she exposes how artificial and theatrical the rest of the film is.  If only the rest of the production had followed Winslet’s lead, Revolutionary Road could have been something great.

For all the pre-release Oscar hype, Revolutionary Road was largely ignored when it came to the Academy Awards.  Michael Shannon received a surprise nomination for best supporting actor but otherwise, the film was snubbed.  Kate Winslet, however, did finally win an Oscar that year when she picked up the Best Actress award for her performance in The Reader. 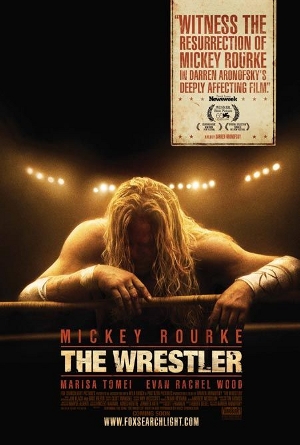 I’m always a little surprised by how much I like the 2008 film The Wrestler.

Actually, to be honest, I’m more than a little surprised.  I’m a lot surprise.  First off, The Wrestler takes place in the world of professional wrestling and that’s a world that I not only know nothing about but which I also have very little interest.  (My cousin Gustavo — Hi, Gus! — loved the Rock.  That’s about the extent of my knowledge.)  Add to that, The Wrestler doesn’t take place in the world of televised pro wrestling.  (I may know nothing about wrestling but I do know a lot about television.)  Instead, this is a world of backroom matches, broken dreams, and fading lives.

Secondly, The Wrestler features, as its hero, a man in his 50s who is still a total and complete fuckup.  The character of Randy “The Ram” Robinson (played, in an Oscar-nominated performance, by Mickey Rourke) is perhaps epitomized by the fact that, after going out of his way to try to reconnect with his daughter, Stephanie (Evan Rachel Wood), and setting up a dinner date so that they can finally talk and get to know each other, Randy ends up getting consumed with self-pity, getting drunk, getting high, getting laid, and ultimately standing up his daughter.  And whenever I see that part of the movie, I hate Randy just as much as Stephanie does because I know exactly how she feels.  Stephanie can’t forgive Randy and neither can I.

And yet, oddly enough, I still care what happens to Randy.  Randy is a former wrestling superstar, a guy who was big in the 1980s but now lives in a haze of obscurity and self-pity.  He now wrestles on the weekend, works a demeaning job at a super market deli, and occasionally plays an old video game which features him as a character.  His only real friend (and source of strength) is Cassidy (Marisa Tomei), a stripper who knows what its like to get older in a profession dominated by the young.

Randy does have one final chance at a comeback, when he agrees to an exhibition fight against his former nemesis, a  “villainous” wrestler known at The Ayatollah (Ernest Miller).  (It’s interesting to note that, outside of the ring, “bad guy” Ayatollah seems to be everything that “good guy” Randy is not, i.e., responsible, stable, and content with his life.)

However, there’s one problem.  Randy has a heart condition and he has been told that continuing to wrestle could kill him.  Will Randy give up the only thing that he’s ever been good at or will Randy potentially sacrifice his life to have one last chance to hear the cheers of the crowd?

Randy Robinson is another one of director Darren Aronofsky’s obsessive protagonists, a character who is so obsessed with something that he’s sacrificed everything else to pursue it.  Fortunately, Aronofsky is a master of making these type of characters sympathetic.  Over the course of the film, Randy fucks up so much that you really are tempted to just give up on him but Aronofsky directs the film with such compassion and Rourke gives such a vulnerable and emotionally raw performance that you find yourself giving Randy another chance despite your better instincts.  The film’s melancholy ending is effective because you know that it really is the only way that Randy’s story can end.