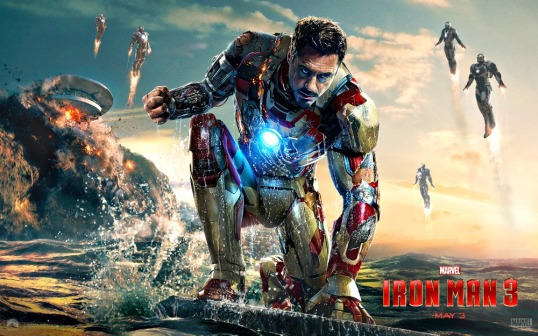 That line above would make such a great send-off for what could be the final Iron Man film. In a perfect world, having Shane Black’s Iron Man 3 as the final one in the franchise wouldn’t be such a bad thing. This doesn’t mean that Iron Man will not appear in any future Marvel Studios endeavors, but as a solo franchise a series couldn’t have found a better way to fly into the Malibu sunset. I say this because in over 5 years Marvel Studios has created a trilogy that took a character in Tony Stark and put him through a character journey encompassing four major film releases and one cameo. They did so in such a way that we saw the character grow from a rich genius dilletante, to a desperate asshole trying to find his identity as Iron Man to finally realizing that he’s the hero with or without the Mark suits he’s has created.

Iron Man 3 is the culmination of what Jon Favreau began with Iron Man in 2008 and Joss Whedon expanded on in 2012’s Marvel’s The Avengers. It took a writer of renown such as Shane Black (who also replaced Favreau as director) to get to the heart of what makes Iron Man ticks. It helped that the returning cast led by Robert Downey, Jr. as Tony Stark and Iron Man once again did a great job in their roles with some characters even getting to do some surprising heroic stuff on the screen. 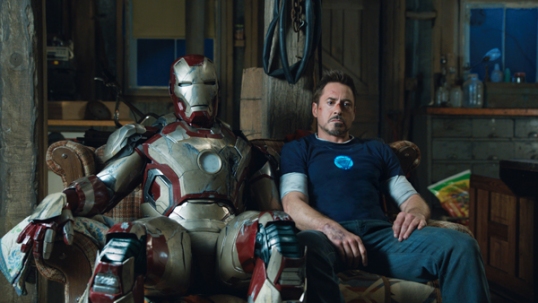 Iron Man 3 starts off with a flashback scene just hours before the arrival of the new millennium. This is just Tony Stark before he becomes Iron Man so we see the character in full charming asshole mode. This sequence is important in that it sets up the whole plot of the film and, in my opinion, the overall story for the entire trilogy. We’re introduced to the geeky Aldritch Killian (played with equal amounts of geeky desperation and overconfident megalomania by Guy Pearce) who sees in Stark the mentor he needs to get his think tank going. With only sex with brilliant scientist Maya Hansen (played by Rebecca Hall) on his mind Killian is soon forgotten and humiliated by Stark.

The rest of the film sees Tony Stark having to pay a steep price for his behavior towards Killian in that flashback and, in conjunction, with his days and nights haunted by the events in New York with the invading Chitauri invasion having given him a case of the PTSD the film looks to bring Tony Stark at his most vulnerable and lowest. It’s a return to the proverbial “Cave” for Tony Stark as he must contend not just with the elusive terrorist mastermind The Mandarin, but also solve the mystery of who or what’s causing the inexplicable explosions and bombings occurring around the nation. All this he must do through most of the film without the use of his Iron Man suits and relying mostly on his own genius intellect and skill with making weapons and gadgets out of anything readily available.

Speaking of The Mandarin (in an excellent performance by Sir Ben Kingsley), Shane Black and co-writer Drew Pearce made a controversial decision (for comic book fanboys at least) to make the iconic Iron Man villain more than he appears to be. It’s a decision that won’t sit well with the more vocal and rabid comic book fans who sees any deviation from Iron Man lore as an affront worth of loud, vociferous rabble, rabble, rabbling that would make Randy Marsh and the people of South Park proud.

To say that the twist in the story that explains who The Mandarin was such a surprise would be quite the understatement. The most important and iconic nemesis of Tony Stark comes out with both barrels of deliberate menace and sociopathic showmanship. We’re meant to see this character as the face of all the evils and troubles that has plagued Tony Stark since the first film. Kingsley plays this part of the character in the film to the hilt. Yet, it’s not until the second half of the film when we find out just who exactly The Mandarin really was and is that Black and Pearce finally put to rest whether the producers and writers would be able to handle a character that’s been seen as a racial caricature from a less than enlightened time.

Whatever howls and apoplectic ravings fanboys might be having about changing the traiditional character of The Mandarin into the pill-popping, drunk British wanna-be actor Trevor Slattery as a bait-and-switch was a brave move on the parts of Black and Pearce. To find out that The Mandarin was just a conjuration by Aldritch Killian to keep the eyes of the world’s governments and superheroes on someone else was very Bond-like. The fact that Killian himself is the true Mandarin and the Ten Rings terrorist organization his creation to have his revenge on Stark for humiliating him on the even of the new millennium closes the circle on what was begun all the way back in the first Iron Man.

This so-called “twist” was so unexpected (the internet scouring for any tidbits about the film’s plot having found nary a hint of this change) that it seemed like some sort of gimmick but as the film barreled on through the second half into it’s explosive conclusion one had to admire the massive stones by Black and Pearce to change such an iconic character knowing how it could easily alienate and anger fans of comic book. It’s this thinking outside the box by this franchise’s new director and screenwriter which makes me feel like Marvel Studios (especially studio head Kevin Feige) have their Phase 2 plan set to spring surprises on comic book and non-comic book fans alike as it marches on towards Avengers 2.

Iron Man 3 was a definite improvement over the bloated second film in the series. It also manages to reach the high bar set by the first film, though as an origin story it still comes away as being the best of the trilogy, but not by much. There was much trepidation from fans of the film franchise when Favreau was replaced by Marvel Studios as director by one Shane Black. While Black was well-known for being a top-notch screenwriter who literally redefined the buddy cop genre his work as a filmmaker was just still only the suprise film Kiss, Kiss, Bang, Bang. While this third film still had some holes in it’s plot that was explained rather conveniently by some brief bits of dialogue it still managed to tell a compelling story of actions and consequences and the discovery that our hero finally makes about just who is the hero of the saga: the man or the machine.

If there’s to be another film bearing the title of Iron Man I would surely hope that Feige and the powers-that-be over at Marvel Studios and Walt Disney just speed-dial Shane Black’s name and to also bring back his co-conspirator Drew Pearce. The franchise is well and good in their keeping. As the final moments of the end credits tick by we’re promised that Tony Stark will return. I sure hope so.