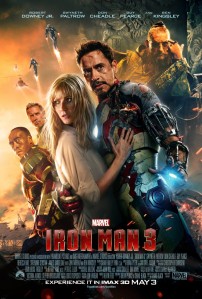 It’s kind of hard to write about Iron Man 3 without giving much away, so this will be kind of condensed. If there’s one thing to learn about Iron Man in Iron Man 3, it’s that the events of the Avengers are really weighing down on Tony Stark. While the movie is more of a stand alone feature than being one part of a larger tale (like the first two leading up to Marvel’s The Avengers), it still manages to be a piece of a puzzle in the Marvel Cinematic Universe. It just happens to be one of those corner pieces. It’s not meant to be viewed the way the others are seen, but still manages to pack a punch.

Taking over the reigns of directing from Jon Favreau’s work on the first two films is Lethal Weapon and Kiss Kiss Bang Bang’s Shane Black. Black brings the witty dialogue and buddy partnership from those film into Iron Man 3 with ease, though the story does take some liberties with the comic.

The movie finds Tony (Robert Downey Jr.) unable to sleep or relax much since the New York Incident, having spent a bit of time in a wormhole and a separate dimension for a few minutes. This has left him with panic attacks as well as doing a lot of research in his workshop. This includes a new improvement to the Iron Man suit that allows him to call it piece by piece when needed, which was a nice touch. As a result of the world finding out that we’re not the center of the universe, they upgraded the War Machine and Colonel James Rhodes (Don Cheadle) to the Iron Patriot. The Iron Patriot acts as the first line of defense, which is just in time, considering that a new threat looms on the horizon in the form of The Mandarin (Ben Kingsley). Through televised declarations and using the same circular pattern from the terrorist group that captured Tony Stark in the first film, The Mandarin pledges to destroy all the President (William Sadler) holds dear.

So, the basis of Iron Man 3 is whether Tony Stark can get past what scared and changed him in The Avengers, stop the terrorism of the Mandarin while still finding a way to protect Pepper Potts (Gwyneth Paltrow).

Let’s first start with any problems before we get to the good stuff – because there’s a lot of great things about Iron Man 3. First off, the movie hasn’t any kind of interaction either from any of the other Avengers or from S.H.I.E.L.D. In any form. This isn’t a bad thing, as the story isn’t about them, but at the same time, it could come off as being expected given everything we saw in The Avengers. For me, personally, I was hoping for more of a connection, but it’s not terrible that it doesn’t exist.

Secondly, the women in the movie aren’t flushed out very well. You won’t find anyone on the level of Peggy Carter (Hayley Atwell) in Captain America here. While Rebecca Hall’s Maya Hansen has an important role in the movie, her screen time is really minimal. Given she’s a scientist, I’m not sure there was a whole lot for her to do, but Elizabeth Shue was a scientist in The Saint and she was all over that movie. Paltrow also takes something of a back seat to Downey and even to Favreau, who returns as Happy Hogan. Instead of concentrating on the girls, they introduced a new individual in the form of a kid. It works to some degree, but kind of felt like filler in some ways until they could get to a point where some action was taken.

For me, outside of these two elements, those are the only real problems with Iron Man 3 for someone unfamiliar with the comic book canon (like myself). If you read Iron Man on a regular basis and know  all the characters, you may be really upset at where it goes, because the adaptation in some way really veers off from the comics. Veers off on the levels of Organic Web Shooters in Spider-Man, that kind of deep.

Now for the fun stuff.

What Iron Man 3 does really well is the way it handles the connections and interactions between the characters. Between Black’s and Pacific Rim writer Drew Pearce. The film basically has the same snap as Kiss Kiss Bang Bang and the final confrontation takes place in a location similar to Lethal Weapon II. Between Downey’s narration, James Badge Dale’s (who should get a run at being a comic hero or villain sometime) attitude and the action sequences, the film moves pretty well. Guy Pearce’s Aldrich Killian was cool. While I liked his character a lot, there were a few elements that were over the top. Kingsley’s Mandarin definitely works for the film, but the direction the story goes is a little weird.

Overall, Iron Man 3 is a fun ride for anyone following the Iron Man movies, and is an overall stronger film than the first. The lack of a direct teaser taste for the next Avengers film and a story shift that could upset die-hard comic fans threaten to hurt the story, but it makes up for it (I feel) by at least giving the story a sense of escalation. If Iron Man 2 was about Tony’s efforts in keeping his technology out of the government’s hands, Iron Man 3 would show why it was important. I wouldn’t mind seeing where this all goes.