(Lisa is currently in the process of cleaning out her DVR!  It’s going to take a while.  She recorded this 1962 literary adaptation off of FXM on January 30th!)

Hemingway’s Adventures Of A Young Man is one of those films that you just know was made specifically to win Oscars.  It’s a big prestige production, complete with a historical setting, an epic scope and big, all-star cast.  That most of those stars appear in relatively small roles was undoubtedly meant to evidence of the film’s importance.

“Look!” the film seems to shout at times, “This is such an important film that even Paul Newman was willing to stop by for a day’s work!”

The film is based on ten short stories by Ernest Hemingway and, loosely, A Farewell to Arms.  The stories all dealt with the early life of Nick Adams, who was a literary stand-in for Hemingway.  Since the Nick Adams stories were autobiographical (and, for that matter, so was A Farewell to Arms), the film can also be viewed as biopic.  Richard Beymer (who, a year earlier, had starred in West Side Story and who is currently playing Ben Horne on Twin Peaks) may be playing Nick Adams but the film leaves little doubt that he was actually meant to be playing Ernest Hemingway.

The film opens with Nick hunting with his father, Dr. Harold Adams (Arthur Kennedy).  He is present when his father travels to an Indian camp and helps to deliver a baby.  He respects his father but Nick wants to see the world and the film follows him as he explores America, working odd jobs and meeting colorful characters along the way.  Paul Newman shows up as a punch-drunk boxer and proceeds to overact to such an extent that he reminded me of Eric Roberts appearing in a Lifetime film.  Nick meets rich men, poor men, and everything in between.  He works as a journalist.  He works as a porter.  Eventually, when World War I breaks out, Nick enlists in the Italian army and the film turns into the 100th adaptation of A Farewell to Arms.

And really, I think it would have been an enjoyable film if it had been directed by someone like Otto Preminger, George Stevens, or maybe even Elia Kazan.  These are directors who would have embraced both the pulpy potential of the Nick Adams stories and the soapy melodrama of the war scenes.  A showman like Preminger would have had no fear of going totally and completely over the top and that’s the approach that this material needed.  Instead, Hemingway’s Adventures Of A Young Man was directed, in a painfully earnest style, by Martin Ritt.  Ritt tries to imitate Hemingway’s famously understated style with his understated direction but, cinematically, it’s just not very interesting.  Ritt portrays everything very seriously and very literally and, in the end, his direction is more than a little dull.

Sadly, the same can be said for Richard Beymer’s performance in the lead role.  Beymer comes across as being the nice guy who everyone says you should marry because he’ll be able to get a good and stable job and he’ll probably never go to jail.  Two months ago, when I watched and reviewed Twin Peaks, I really loved Beymer’s performance as Ben Horne.  He just seemed to be having so much fun being bad.  Unfortunately, in Hemingway’s Adventures Of A Young Man, he never seemed to be having any fun at all.  No wonder he temporarily put his film career on hold so that he could fully devote himself to working as a civil rights activist.

In the end, this is a movie that’s a lot more fun to look at than to actually watch.  Visually, the film is frequently quite pretty in an early 1960s prestige movie so sort of way.  And there are some good performances.  Eli Wallach, Ricardo Montalban, Susan Strasberg, Arthur Kennedy — there’s a whole host of performers doing memorable supporting work.  Unfortunately, even with all that in mind, this well-intentioned film largely falls flat. 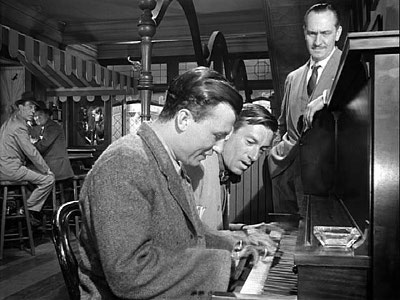 The film deals with veterans returning home from World War II and struggling to adjust to life in peacetime.  That’s a topic that’s as relevant today as it was back in 1946.  If there’s anything that remains consistent about human history it’s that there is always a war being fought somewhere and the man and women who fight those wars are often forgotten and abandoned after the final shot has been fired.  The returning veterans in The Best Years Of Our Lives deal with the same issues that our soldiers have to deal with today as they return from serving in Iraq and Afghanistan.

The Best Years Of Our Lives follows three veterans as they return home to Boone City, Ohio.  As they try to adjust to civilian life, their loved ones struggle to adjust to them.

Fred Derry (played by Dana Andrews) is a self-described former soda jerk.  (To be honest, I’m really not sure what a soda jerk was but it doesn’t sound like a very fun job.)  During the war, he was a captain in the air force.  He returns home with several decorations and few marketable skills.  During the war, he was good at bombing cities but there’s not much that can be done with that skill during peacetime.  Nearly penniless, Fred takes a job selling perfume at a department store.  He spends his days trying to control her temper and not give into his frustration.  At night, he’s haunted by nightmares of combat. 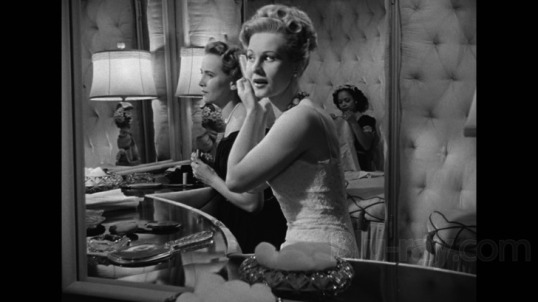 Meanwhile, his wife, Marie (Virginia Mayo), finds herself resenting the fact that Fred has come home.  She married him while he was in flight training and, as quickly becomes obvious, she’s less enamored of Fred now that he’s just another civilian with a low-paying job.  (She continually begs him to wear the uniform that he can’t wait to take off.)  The Best Years Of Our Lives is a film full of great performances but Virginia Mayo really stands out.  I have to admit that, whenever I watch this film, I find myself envious of her ability to both snarl and smile at the same time.

Al Stephenson (Fredric March) was a bank loan officer who served as an infantry sergeant.  (It’s interesting to note that the educated and successful Al was outranked by Fred during the war.)  Al returns home to his loving wife, Milly (Myrna Loy), his daughter Peggy (the beautiful Teresa Wright), and his son, Rob (Michael Hall).  At first, Al struggles to reconnect with his family and he deals with the tension by drinking too much.  Rehired by the bank, he approves a risky loan to a fellow veteran.  After the bank president (Ray Collins, a.k.a. Boss Jim Gettys from Citizen Kane) admonishes Al, Al gives a speech about what America owes to its returning veterans.

Meanwhile, Peggy has fallen in love with Fred.  When Milly and Al remind her that Fred is (unhappily) married, Peggy announces, “I am going to break that marriage up!”  It’s a wonderful line, brilliantly delivered by the great Teresa Wright.

Marriage is also on the mind of Homer Parrish (Harold Russell).  A former high school quarterback, Homer was planning on marrying Wilma (Cathy O’Donnell) as soon as he finished serving in the Navy.  During the war, he lost both his hands and now he’s returned home with metal hooks.  Homer locks himself away from the world.  When he finally does talk to Wilma, it’s to show her how difficult life with him will be.  Wilma doesn’t care but Homer does.

It’s been nearly 70 years since The Best Years Of Our Lives was first released but it remains a powerfully honest and surprisingly dark film.  All three of the veterans deal with very real issues and, somewhat surprisingly, the film refuses to provide any of them with the type of conventional happy ending that we tend to take for granted when it comes to movies made before 1967.  As the film concludes, Fred is still struggling financially.  Homer is still adjusting to life as an amputee.  Al is still drinking.   All three have a long road ahead of them but they’re all making progress.  None of them will ever be the same as they were before the war but, at the same time, they’re all working on making new lives for themselves.  They haven’t given up.  They haven’t surrendered to despair and, the film suggests, that is triumph enough.

The Best Years Of Our Lives is a great film and a great best picture winner.  It’s just a shame that it had to be released the same year as It’s A Wonderful Life.