Image Credit: http://www.sliceofscifi.tv/tag/trivia/ Please be sure to check them out!

One or more of the films reviewed below will appear on my list of the 16 Worst Films of 2015!  Can you guess which one(s)? 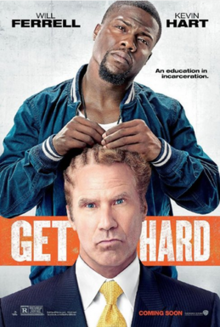 Get Hard (dir by Etan Cohen)

Will Ferrell is funny and Kevin Hart is funny and you would think that putting them together in one movie would be especially funny but … nope.  Get Hard, which I watched on HBO a few weeks ago, is incredibly not funny.  Ferrell plays a hedge fund manager who is convicted of fraud and embezzlement and it’s a sign of how haphazard this film is that I was never really sure whether he was supposed to be guilty or not.  Anyway, Ferrell is terrified of going to prison but fortunately, he runs into Kevin Hart.  Hart is playing the owner of a car wash here, a mild-mannered family man who simply wants to be able to afford to send his daughter to a good school.  However, Ferrell assumes that, since Hart is black, Hart must be an ex-con.

So, Ferrell hires Hart to teach him how to survive in prison and Hart agrees.  And, to be honest, this is not a terrible idea for an edgy satire but the film pulls it punches and never really exposes or challenges the racism that led to Ferrell hiring Hart in the first place.  Instead, it’s more interested in making homophobic jokes about prison rape (there’s a particularly long and unpleasant scene where Ferrell attempts to learn how to give a blow job that feels like it was lifted from a deservedly forgotten 90s film) and eventually, it devolves into a painfully predictable action film. 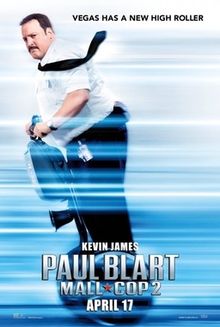 I know what someone out there is saying.

“YOU’VE NEVER EVEN SEEN THE FIRST PAUL BLART: MALL COP!!!  WHO THE HELL ARE YOU TO REVIEW THE SEQUEL!?”

Well, listen — it’s true.  I’ve never seen the first film and the only reason I watched the second one (on HBO at a friend’s house, which means that it literally cost me nothing) was because I had heard how terrible it was and I figured that I should see it before making out my list of the worst films of the year.  But, even with that in mind, I think I can still give this film a fair review.

Paul Blart: Mall Cop 2 is one of those films that is so forgettable that you forget about it while you’re watching.  Kevin James plays Paul Blart, a mall security guard who goes to Las Vegas for a security guard convention and ends up getting involved in thwarting a big heist.  It’s a comedy, though I can’t think of a single time I laughed.  Paul Blart: Mall Cop 2 was not quite the abomination that I had been led to expect.  It was, in no way, comparable to Birdemic, April Rain, or Man of Steel.  Instead, it was just an incredibly empty and soulless film.  It was a zombie movie that existed only to eat money.

One thing that is frustrating about a film like Paul Blart: Mall Cop 2 is that Kevin James seems like he could actually survive appearing in a good film, if he could just get a chance to make one.  He’s likable and he’s got an everyman quality about him.  But, for now, he seems to be trapped in films where he either plays Paul Blart or he’s surrounded by talking animals.

Speaking of Kevin James, he’s also in Pixels!  He plays William Cooper.  When he was a kid, he was obsessed with playing video games.  Now that he’s an adult, he’s the President of the United States!  And he still keeps in contact with his best friend from childhood, Sam.  Sam, needless to say, will never be President.  When Sam was a kid, he was traumatized when he lost a national video game championship.  Now that he’s an adult, he installs home-theater systems and he’s played by Adam Sandler…

When Earth is invaded, it turns out that the aliens are under the impression that video games are real!  So, they recreate a bunch of classic video game characters and send them off to do havoc.  Who better to stop them than the President and Sam?  And who better to help than a nerdy conspiracy theorist (Josh Gad) and Eddie Planet (Peter Dinklage), the same guy who cheated in order to defeat Sam at the video game championship….

If you’re thinking that sounds like way too much plot for a silly comedy about video games coming to life, you’re right.  Pixels has some cute moments (though, based on the comments and occasional laughter of the middle-aged people in the theater around me, I get the feeling that a lot of the film’s video game-themed humor was a bit too “before my time” for me to fully appreciate) but oh my God, it was such an unnecessarily busy movie.  The idea behind Pixels had some potential but the film refused to take advantage of it.

I’ve said this before and I always get some strange looks but I honestly do think that — if he would actually break out of his comfort zone and stop doing movies that mostly seem to be about finding an excuse to hang out with his friends — Adam Sandler could be an acceptable dramatic actor.  Check out his work in Punch-Drunk Love, Funny People, Reign Over Me, Spanglish, and even the first half of The Cobbler.  (Tarantino even wrote the role of Donny Donowitz in Inglourious Basterds with Sandler in mind.)  The fact that Sandler could be doing good work makes his continual bad work all the more frustrating and annoying. 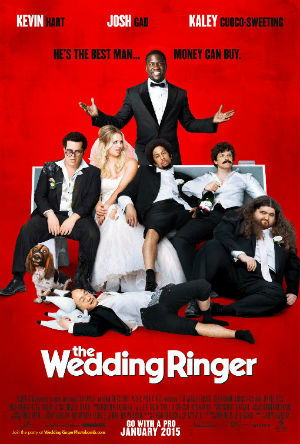 And speaking of Josh Gad…he’s also in The Wedding Ringer!  For that matter, so is Kevin Hart.  Hart plays a guy who, for a sizable fee, will pretend to the lifelong best friend (and best man) for grooms who do not have enough real friends to fill out a wedding party.  Hart refuses to get emotionally involved with his clients but that all changes when, despite himself, he becomes friends with Josh Gad, who is on the verge of getting married to Kaley Cuoco.

The Wedding Ringer got terrible reviews but it also was very popular with audiences and I imagine a lot of that had to do with the relationship between Hart and Gad.  Both of them give very sincere performances that elevate some otherwise unpromising material.  The Wedding Ringer wasn’t good (it’s predictable, it’s portrayal of Kaley Cuoco’s character verges on misogynistic) but, at the same time, it wasn’t as bad as it was made out to be.  In the end, it was pretty much a typical January film. 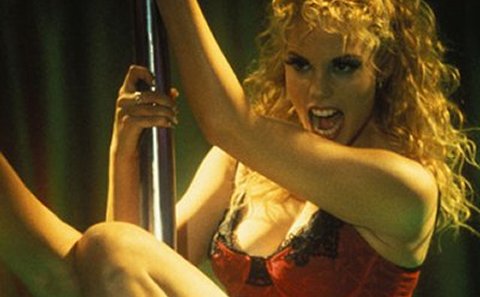 Which of these four films will make my list of the worst 16 films of 2015?  The answer shall be revealed soon!