Last night, I watched the latest Lifetime original movie, Stalked By My Neighbor. 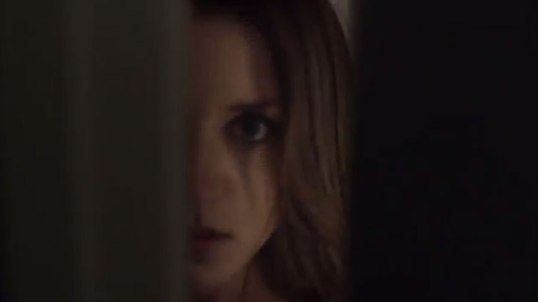 It’s a Lifetime homage to Rear Window!  Jodi (Kelcie Stranahan) and her mother (Amy Pietz) move to the suburbs.  A talented photographer, Jodi is still struggling to deal with the after-effects of a horrifying home invasion.  Hiding out in her bedroom, Jodi watches her new neighborhood through the lens of her camera and eventually comes to believe that she may have witnessed the murder of a neighbor (Kelly Packard).  While the police suspect that the murderer was the cute boy who lives next door (Grant Harvey), Jodi suspects that it may have actually been the dead woman’s niece (Katrina Norman).  Soon, Jodi, camera in hand, is stalking her neighbors and trying to solve the mystery.

Stalked By My Neighbor was directed by Doug Campbell, who earlier this year gave us Sugar Daddies.  As I previously stated in my review of Sugar Daddies, Campbell is one of the better filmmakers to regularly make films for Lifetime.  (He also directed several of my favorite ….At 17 movies.)  Much as he did with Sugar Daddies, Campbell strikes just the right balance between melodrama and realism.  As both director and screenwriter, he pushes the story as far as it can go without allowing things to go overboard.  The end result is a very entertaining film that is the epitome of why people like me love Lifetime movies.

Kelcie Stranahan was well-cast as Jodi and she had a lot of chemistry with Grant Harvey.  As well, she and Amy Pietz were totally believable as mother-and-daughter.  Wisely, while the film had a lot of fun with the more melodramatic elements of the mystery plot, Jodi’s PTSD was played totally straight and Stranahan did a great job of capturing Jodi’s fragile mental state.  By the end of the film, Jodi is a role model for survivors everywhere.

It all worked.  This was Lifetime moviemaking at its best!

I totally related to the character of Jodi, which is a huge reason why I enjoyed the movie.  Towards the end of the film, Jodi had a fight with her mom and ended up getting grounded.  Afterward, Jodi made it a point to elaborately apologize and then, as soon as her mom left the room, Jodi was sneaking out the bedroom window.  That one scene pretty much epitomized my senior year of high school.

And really, the relationship between Jodi and her mom was the main reason why I loved Stalked By Neighbor.  Don’t get me wrong.  The mystery was fun.  Grant Harvey was cute and the scene where he dances with Jodi was really well done.  But ultimately, the film worked for me because I related so much to Jodi and I saw so much of my mom in her mom.

If you think you’re neighbor might be a murderer, always make sure you have an extra memory card for your camera.  (Seriously, watch the movie.  It’ll make sense.)