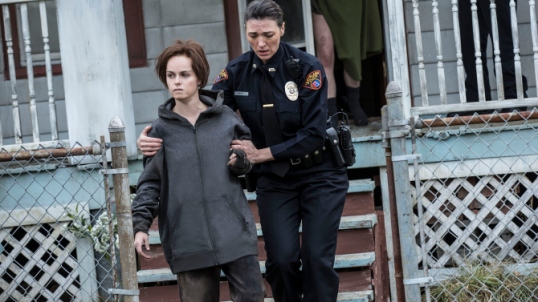 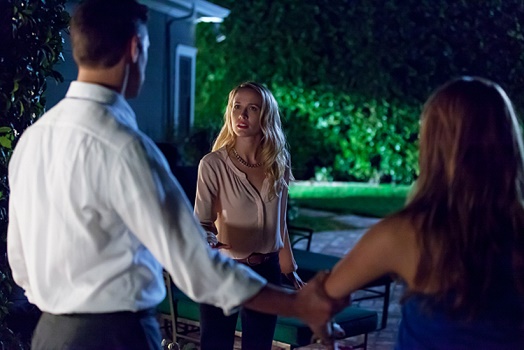 Since I’m still in the process of recovering from my sprained foot, I am spending today at home.  And I have to tell you that this whole resting and taking it easy thing is starting to drive me crazy!  Other than a very short police standoff in Arlington, there was absolutely nothing interesting on TV this afternoon.  So, in an effort to stave off impending boredom, I decided to continue cleaning out my DVR.

I just finished watching Caught, a film which made its Lifetime premiere on November 7th.  (I missed it because I was out celebrating my upcoming birthday with my friends in the SBS.  Sexy Bitch Squad Forever!!!)  Much like Stockholm, Pennsylvania, Caught was originally meant to be a theatrical release.  It played at a few film festivals earlier this year until it was finally picked up by Lifetime.

And watching Caught, it’s easy to see why it ended up going straight to television.  It’s not that Caught is a bad movie (especially when compared to the turgid mess that was Stockholm, Pennsylvania).  It’s just that there’s nothing really cinematic about Caught.  There’s no one moment or scene that makes you think, “I really wish I could see this on a big screen.”  From the start, Caught feels as if it was tailor-made for Lifetime and that’s where it belongs.

And again, that’s not a criticism.  I’ve lost track of how many of them that I’ve reviewed on this site but, by now, you should have no doubt that I happen to like Lifetime movies.

Caught opens with teenager Allie (Stefanie Scott) having a bad day.  Because she’s failing some of her classes, she’s been kicked off the school’s track team.  When she’s not sleeping through class or going for a run, Allie works at a resteraunt, where her boss just happens to be her mother (Mary B. McCann).  After a day of dealing with bad grades and rude customers, Allie is looking forward to continuing her affair with the much older, Justin (Sam Page).  However, once Allie’s mom meets Justin, she declares that she no longer wants Allie to see him.

And then, to top it all off, Allie gets kidnapped and ends up chained to a chair in an attic.

Who has kidnapped Allie?  Well, judging from such previous Lifetime movies as The Bride He Bought Online and Stolen From The Suburbs, the obvious answer would be the Russian Mafia but, in Allie’s case, the obvious answer is wrong.  Instead, she has been kidnapped by two sisters who aren’t really sure what they’re planning on doing with her.  The younger of the two, Paige (Amelia Rose Blaire), is a shy introvert who starts to have second thoughts almost immediately.  The older sister is Sabrina (Anna Camp).  Sabrina masterminded the abduction.  Sabrina also happens to be married to Justin…

Now, I have to admit, that I had my doubts when this movie started.  Allie seemed like such a boring character that it was difficult for me to get emotionally invested in … well, in anything that she was involved with.  When her coach told her she was off the team, I thought to myself, “You should have paid attention in class.”  When her mom yelled at her for being late to work, I thought to myself, “I’m glad that I’ve never had to really work hard for a living.”  And when Justin showed up, I shrugged and thought, “Why wouldn’t the two most boring people on Earth be drawn to each other?”

But then Allie got kidnapped and I quickly realized that Allie’s blandness may have very well been intentional.  Because, ultimately, Caught is not about Allie.  Instead, Caught is totally about Sabrina and, even more importantly, it’s about Anna Camp’s thoroughly wonderful performance in the lead role.  Sabrina is totally batshit insane and Camp has a lot of fun playing that aspect of her personality.  And, because she is so insane and so neurotic about trying to hide that fact, Sabrina is also the only interesting person in the entire movie.  Throughout Caught, she struggles so hard to keep the kidnapping from going wrong that it’s hard not to sympathize with her.  It didn’t matter what happened, I found myself on Sabrina’s side.  Really, I found myself thinking, Sabrina just killed a cop?  Well, maybe he shouldn’t have insisted on trying to search the house even after she told him it wasn’t necessary!  Oh, did Sabrina just threaten to kill someone else?  Well, maybe everyone just needs to get off her back, y’know!?  Sabrina’s like a suburban hostess watching in terror as a drunk uncle and an out-of-control pre-schooler team up to destroy her dinner party.  It’s up to her to somehow clean up the mess while continually to assure all of her guests that all is well, even when it obvious is not.  Sabrina may say some hateful things during the movie but she always manages to say them all with a smile.  Quite frankly, we could all learn a listen from Sabrina.

Once you realize that Caught is totally about Sabrina (and, even more importantly, totally about Anna Camp’s lead performance), it actually works fairly well.