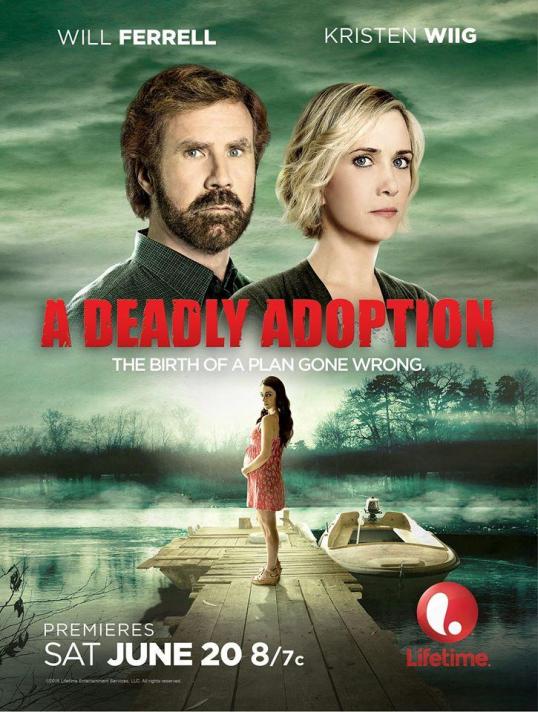 Never call a lady with a gun a crazy whore. #ADeadlyAdoption

Last night, an article appeared on Mashable in which I was declared to be one of the  “20 people who totally get the ridiculousness of Will Ferrell and Kristen Wiig’s ‘A Deadly Adoption.”  At the time, I was incredibly flattered but also somewhat incredulous.  If I was one of the 20 people who understood that the latest Lifetime film, A Deadly Adoption, was meant to be a drier than dry comedy then that meant that there were presumably people out there who did not get the joke.

And how could that be!? I wondered.

In case you missed it, on April 1st, a story was leaked that Will Ferrell and Kristen Wiig were secretly making a film for Lifetime.  The title of that film was A Deadly Adoption and early reports indicated that it was going to be a serious Lifetime film.  Because the story came out on April Fools Day, a lot of us assumed it was a joke.

However, then Will Ferrell announced that no, it was not a joke.  But now that news of the film had been leaked, he was prepared to close down production and make sure that the film never saw the light of day.  Now, whether Will was being serious in his anger or not is debatable.  (It’s easier to imagine Ron Burgundy having that reaction than Will Ferrell.)  But, regardless, cooler heads prevailed and soon, Lifetime viewers like me were enjoying commercials that featured Jessica Lowndes pointing a gun at a very grim and bearded Will Ferrell.

As the premiere approached, critics and viewers alike wondered if A Deadly Adoption was meant to be a serious film or if it was going to be a comedy.  Those who felt that the film was meant to be serious pointed out that the commercials for the film contained absolutely no hint that it might be a comedy.  Those who thought it was a comedy simply said, “Will Ferrell and Kristen Wiig.”

As for me, I pretty much knew what A Deadly Adoption was going to be from the minute that I discover it was being produced by the same people behind Spoils of Babylon.  And, when I watched the film last night, my suspicions were confirmed.  A Deadly Adoption is a drier-than-dry satire, a film that mashes together every single Lifetime movie trope in order to create the ultimate Lifetime experience.  A Deadly Adoption gets its laughs by refusing to openly acknowledge that it’s gone totally over-the-top.  Will Ferrell and Kristen Wiig both give extremely serious performances, with the humor coming from the fact that they are, with extremely straight faces, delivering dialogue and dealing with situations that are both ludicrous and yet very familiar to anyone who has ever spent a weekend binging on Lifetime.  The end result is that A Deadly Adoption both satirizes and pays tribute to everything that we love about a good Lifetime film.

(Does that make A Deadly Adoption the Sharknado of Lifetime movies?  Technically, yes.  But let’s not say that too loudly because Mia Farrow might hear and decide to live tweet the next showing.)

As for the film itself, it tells the story of Robert (Will Ferrell) and his wife, Sarah (Kristen Wiig).  Robert is a financial author who is also a recovering alcoholic with anger management issues.  (Significantly, everyone always talks about how angry Robert is, despite the fact that we never actually see him lose his temper.)  We know that Robert is a writer because he skypes with his agent and tells her stuff like, “Let’s cut chapter four.”  Sarah, meanwhile, has a typical Lifetime movie career.  She sells organic food at the local farmer’s market.  And, like all Lifetime movie heroines, she has a token and obviously doomed gay best friend named Charlie (Bryan Safi).

Years ago, as the result of an accident on a dock, a pregnant Sarah nearly drowned and lost her baby.  As a result, Robert is incredibly protective of their other daughter, Sully (Aylvvia Alyn Lind). (As part of the A Deadly Adoption drinking game, take a drink every time Will Ferrell says, “She needs her medicine!”)  Robert is also now scared of going out on the water so you better believe that the film’s conclusion is going to involve Robert in a tiny boat.

Look at Will Ferrell conquering his fears…I'm proud of him. #ADeadlyAdoption

Anyway, Robert and Sarah want to adopt the unborn child of Bridget (Jessica Lowndes) but what they don’t know is that Bridget has plans of her own.  Upon accepting their offer to live with them until she gives birth, Bridget starts to subtly disrupt the lives of Robert and Sarah.  That right, she’s obsessed!  And, of course, she’s got a redneck boyfriend (Jake Weary) who drives a pickup truck and has a lot of “dangerous” tattoos.  And…

Well, I could actually devote a few thousand words to telling you the plot of A Deadly Adoption.  A lot of stuff happens.  In fact, every single plot point from every single Lifetime film ever made gets used at some point.  Everything about this film — from the acting to the direction to the tasteful decor of Robert and Sarah’s house to the almost obsessive focus on Jessica Lowndes’s cleavage — is designed to make this film look like a typical Lifetime film.

And now it's time for the sad music montage… #DeadlyAdoption

The brilliance of it comes from the fact that Ferrell, Wiig, Lowndes, and Weary all deliver their increasingly ludicrous lines with such intense commitment and low-key seriousness.  (Kristen Wiig, in particular, is great.)  With the exception of one line about lighter fluid and a dance party at the end of the film, there’s nothing in A Deadly Adoption that plays for obvious laughs.  Instead, the film is a two-hour inside joke and, if you get the joke, you’re one of the cool kids.

Unfortunately, there are a lot of uncool kids out there and a lot of them did not get the joke.  If you check out the comments left on the film’s imdb page, you’ll discover that there’s still a lot of people out there who are wondering whether this was meant to be a serious film or not.

(Did he say that?  Sounds like something he would say.)

Anyway, to answer those who still do not know — yes, A Deadly Adoption was a comedy.

And it was a brilliant one at that!

This is what I feel like doing whenever people say they don’t know if A Deadly Adoption was supposed to be funny.

40 responses to “Yes, A Deadly Adoption Was A Comedy…”