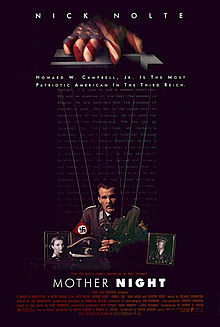 Lee is cast as Helga Noth, the German wife of American expatriate Harold W. Campbell (Nick Nolte).  Harold is a playwright, living in Berlin and doing propaganda broadcasts for the Nazis.  Working with Frank Wirtanen (John Goodman), a military intelligence officer, Campbell has developed a series of verbal tics that are meant to secretly deliver information to the Allied Forces.  It is never clear whether Harold’s information serves any real purpose just as it is left ambiguous as to whether Harold believes any of the anti-Semitic propaganda that he broadcasts over the airwaves.  Working as both a propagandist and a double agent, Harold serves both the Allies and the Axis.

In the final days of the war, Helga is reportedly killed on the Eastern Front and Harold is captured by the Americans.  Frank arranges for Harold to be quietly sent to New York City but tells him that the government will never admit that they used him as a double agent.

Harold spends the next fifteen years living an isolated life in New York.  His only friend is an elderly painter, Kraft (Alan Arkin), with whom he plays chess.  Eventually, Harold opens up to the painter and talks about his past.  Kraft, for his own shady reasons, reveals Harold’s identity to a group of neo-Nazis.  Though Harold initially wants nothing to do with them, this changes when they reveal that they have Helga.

Or do they?  Almost no one in Mother Night is who they claim or what they seem to be, especially not Harold.

Based on a novel by Kurt Vonnegut, Mother Night suffers from the same uneven quality that seems to afflict most films based on Vonnegut’s work.  It is easy to go overboard when it comes to bringing Vonnegut’s unique mix of drama and satire to the screen and Mother Night does that in a few scenes, especially once Harold reaches New York.  It is still an intriguing and thought-provoking film, though.  Nick Nolte gives one of his best performances as Harold and Sheryl Lee does a good job in a difficult role.

The pinnacle of Vonnegut films remains George Roy Hill’s version of Slaughterhouse-Five but Mother Night is still superior to something like Alan Rudolph’s adaptation of Breakfast of Champions.