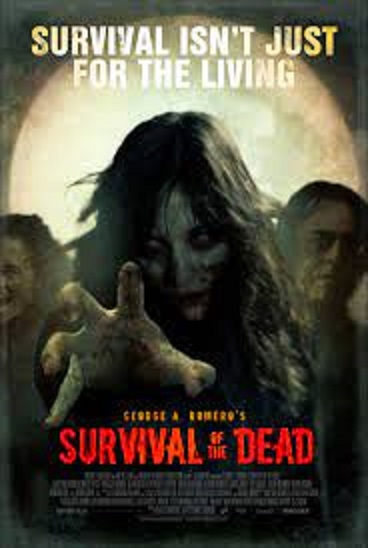 Sitting off the coast of Delaware, Plum Island seems like the perfect place to live. The people are friendly. The town is small and quaint but definitely inviting. There are plenty of horses, for those who like to ride. The island’s one mailman is a welcome sight, dropping off mail everyday and giving everyone a friendly wave.

The only problem with Plum Island is that, as pretty as it may be, it is also the home to two feuding Irish families. Patrick O’Flynn (Kenneth Welsh) and Seamus Muldoon (Richard Fitzpatrick) have been enemies for as long as anyone can remember. Their feud has gone on for so long that its doubtful anyone even know what started it all. The two families have an uneasy peace up until the breakout of the zombie apocalypse. The O’Flynns want to kill every zombie that shows up on the island. The Muldoons, on the other hand, want to keep the zombies as pets and workers until a cure for their condition can be found. Eventually, Patrick O’Flynn turns out to be so reckless in his mission to destroy the undead that he’s exiled from the island. Even his own daughter, Janet (Kathleen Munroe), supports sending Patrick off to the mainland.

However, no sooner has Patrick been exiled then he hooks up with a bunch of AWOL National Guardsmen, who are weary of spending the rest of their days chasing the undead. Patrick leads them back to Plum Island, hoping to use them to destroy the the Muldoons forever.

Released in 2010, Survival of the Dead is both the final entry in George Romero’s Dead films (which started way back in 1968 with the classic Night of the Living Dead) and it was also Romero’s last completed film as a director. (Romero died in 2017, while in pre-production on a film called Road of the Dead.) Unfortunately, Survival of the Dead was not warmly greeted by critics or audiences, many of whom felt that Romero was simply rehashing concepts that he had already fully explored in the previous Dead films.

To a certain extent, those critics have a point. There are a lot of flaws with Romero’s final film, from the obviously low budget to the inconsistent performances. (Welsh, Fitzpatrick, and Munroe are all well-cast and give good performances but the National Guardsmen are all forgettable at best.) At the same time, there’s enough weird moments in Survival of the Dead to make it watchable. Plum Island is a memorably surreal location. The undead of Plum Island continue to exhibit the same behavior in death that they did in life. The mailman still tries to deliver mail. Another zombie continues to ride her horse across the island. It’s only when they sense the living amongst them that they turn deadly. As with all of Romero’s Dead films, the living dead may be dangerous and relentless but the truly scary characters in the film are the living humans who, even in the middle of the end of the world, cannot set aside their differences long enough to work together. The film’s final shot, which suggests that it takes more than death to end a blood feud, is so striking that it makes up for a lot of the weaker moments that came before it.

In the end, the most interesting thing about Survival of the Dead is that it’s more of a western than a traditional horror movie, featuring two warring families fighting on horseback and battling to control the land. Romero often said that he felt trapped by his reputation as a horror filmmaker and that he was actually interested in all genres of film. With Survival of the Dead, Romero finally got to make a Western. The end result is uneven but still has enough interesting moments to make it worth watching.

One response to “The TSL’s Horror Grindhouse: Survival of the Dead (dir by George Romero)”